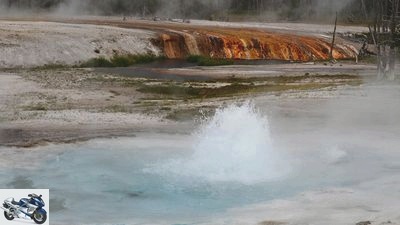 Panamericana 2012: On the way from Alaska to Tierra del Fuego: Calgary

Panamericana 2012: On the way from Alaska to Tierra del Fuego
Drive-in geysers

At first I was overwhelmed by the beautiful nature through which the so-called Loop Road – an eight-shaped ring road through the national park – runs.

It is true that there is no boredom between the sights, but after endless kilometers through forests and meadows, it should also be a wild animal.

I’m at the park entrance pretty early and I’m happy to be able to come in with my annual pass. I felt as if Yellowstone National Park was excluded. The road winds through the park, to the right of it a wide but shallow river flows, morning mist hovers over the water.

A couple of anglers are standing by their car, getting ready to catch some fat trout. Fishing is allowed even though it is a national park – there are certainly catch restrictions. Hundreds of meters away I can see high clouds of steam, the first signs of the volcanic activity in the park. 2.1 million years ago, today’s area was a super volcano, and gases and vapors are still rising to the surface of the earth in many places. 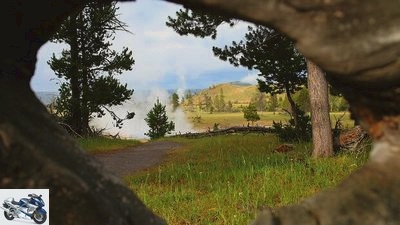 Panamericana stop with a view of the Ojo Hot Springs.

I turn off at Ojo Hot Springs, and because it’s so early there is only one car in the parking lot. It’s a 500 meter walk to the hot spring, and I’m amazed that it’s only “fenced in” by a few wooden beams on the ground. Caution is advised here, it is better not to use it, because the surfaces here can sometimes be very thin and collapse. Steam rises, and thanks to almost no wind, it stays in the air for a long time and is illuminated by the morning sun. Great. The water from the spring flows into a small stream, I dip my hand – it’s really warm! I drive on, see a bison, unfortunately a bit far away. The next springs are pretty close, or this time a real geyser, a bit next to it a mud geyser.

Wooden planks lead around the most beautiful places, you get relatively close. Be amazed, take photos, go on. At first I was overwhelmed by the beautiful nature through which the so-called Loop Road – an eight-shaped ring road through the national park – runs. It is true that there is no boredom between the sights, but after endless kilometers through forests and meadows, it should also be a wild animal. I am approaching what is probably the most famous geyser in the world: the Old Faithful. An expensive, dry sandwich is my breakfast, because I have a good 30 minutes until the next outbreak. And I’m lucky with that, sometimes it takes up to an hour and a half from one outbreak to the next. 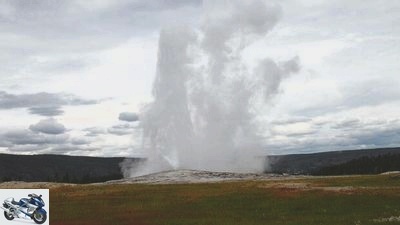 The old man is still loyal, but over time doesn’t take it that seriously. And not with height either. There are benches around the geyser in a circle and at a good distance from each other; shortly before the climax, almost all of them are occupied. It starts, and what can I say, I already imagined it to be a bit higher and more spectacular. That should be 30 meters? Well, it was nice anyway.

Shortly afterwards I stop at another, smaller geyser, which is almost more interesting than the Old Faithful. Hot water gushes to the surface all the time, sometimes shooting meters high into the air. I read on a sign that the water rarely boils, but always comes to the surface with gases and therefore bubbles. Aha. 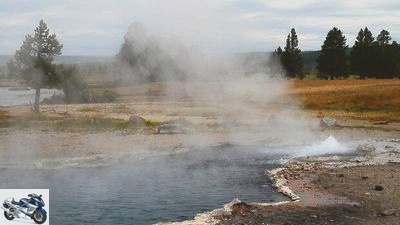 The ground around the spring is reddish in color, the inner edge of the geyser itself glows blue. It’s drizzling now. Paths branch off from Loop Road to places of interest again and again, I often stop and walk the few hundred meters. A bison lies lazily next to a mud hole and can be properly evaporated. A little further away there is another one right next to the wrong path I’m on here – what a play on words.

Nothing is fenced in here either, if it wanted the bison could take the path. I’ve read that the critters like to run on the snow-cleared roads in winter to save energy. In winter, however, only one street in the park is open anyway.

Once again the cars are queuing at the roadside, excited tourists run across the street without looking. This time there are particularly many and even a ranger is there. It has to be something interesting. I park, join the crowd and look down the embankment into the river. Difficult to guess how far it is, but on the other side of the bank lies the fresh carcass of a deer or elk half in the water. Not much is missing, the bear apparently wasn’t hungry as a bear, just slit open its stomach and nibbled a little something – as far as I can see it from above. 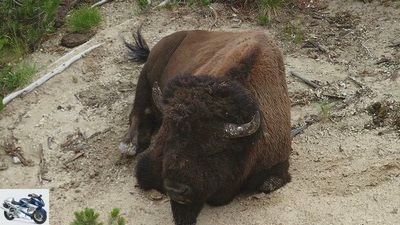 The bison are lazy here.

Only two people have been killed by bears in Yellowstone National Park in the past 20 years. And that despite the fact that there were more than three million visitors here last year alone! I’m not worried, and I think it’s a bit silly when a guy on the campsite goes to the toilet with his can of anti-bear spray (the cans look like little fire extinguishers for the car, they are filled with pepper spray).

Mammoth Hot Springs are pretty impressive. Hot water flows over terraced steps, has created real pools over the years. Here, too, it glows red in the water, the terraces themselves are white – it looks like salt, but could also be lime. I dont know.

At some point I thought so strange that the Americans don’t have drive-in geysers, they usually only do everything by car. You already guessed it – something like that actually exists. Of course you don’t drive in, but you don’t do that at McDonald’s either. I don’t remember what it was called, but somewhere an old road with broken asphalt leads right around a five-meter-high hill with water gushing out at the top. You don’t even have to get out. Down the window, take out the camera, go on. pure nature.

I’m going back to the campsite and want to go to the park again tomorrow – it doesn’t cost me anything.