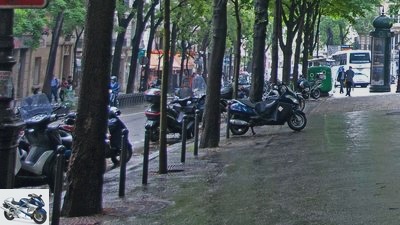 The French metropolis will also demand parking fees from motorcycle owners from 2022. But only by those who park a combustion two-wheeler.

Under its mayor Anne Hidalgo, Paris has long declared war on the immense volume of traffic in the French capital. The latest foray hits motorcyclists.

Burners pay up to 3 euros per hour

After road users in and around Paris have switched to two-wheelers as the means of choice over the years to escape the daily traffic chaos, precisely these two-wheelers (and also three-wheelers) became increasingly a problem. There are far too few special parking spaces for motorcycles in Paris, so people parked wherever the space allowed (or not). Or you used one of the few car parking spaces legally. Either way, parking space is scarce in Paris.

The Paris city government is now trying to get the problem under control with new nationwide parking fees. As the Hidalgo administration has now announced, parking fees will be charged for all motorized two- and three-wheelers from 2022, provided they have a combustion engine. Depending on the urban area, these should be two to three euros per hour. Special tariffs are to be applied for residents.

However, new parking spaces for motorcycles are not to be set up. If the existing ones are not enough, then motorcyclists should just park in car parking spaces. The conflict with the four-wheeler colleagues is preprogrammed.

But motorists don’t get away with it either. At the same time, parking fees for cars in urban areas will rise by around 70 percent. As early as August 2021, the hourly rates will be increased from four to six euros and from 2.40 euros to four euros, depending on the urban area.

The bottom line is that Mayor Hidalgo hopes to be able to permanently minimize traffic in Paris. On the other hand, the parking fees represent a lucrative source of income for the French capital. The income from parking fees currently amounts to around 380 million euros annually. After all, this corresponds to a four percent share of the total annual budget of Paris.

Would you be willing to pay parking fees for a motorcycle if there was parking available??

Yes, I wouldn’t have a problem with that.

No, motorbikes / scooters should be able to park free of charge.

Paris is fighting against more and more traffic. In order to deter more road users from driving into the metropolis, parking fees for cars are now being increased and new parking fees are being introduced for motorized two-wheelers – with the exception of e-motorcycles. On the other hand, Paris does not live badly on the income from parking fees.