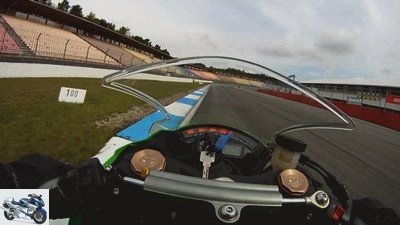 If you want to be fast, you have to know how to brake. That sounds paradoxical, but the brakes make the real racer. PS instructor Pascal Eckhardt explains what it’s about.

“Hey, corner, where am I missing the time?” That is probably the most common question I get asked during PS training. My answer is almost always: “On the brakes.”

Correct cornering speed is the key

Straight out: nowadays, when traction controls are no longer reserved for factory teams, anyone can accelerate. Of course you can still work on it and improve yourself, but 99 percent of the time the lap time for amateur pilots increases when braking. Sounds crazy – what does braking have to do with saving time? Quite a lot! Because effective braking is not just about pushing the braking point back as far as possible. Braking properly is pretty darn complex. The well-known saying “If you brake later, you are faster longer” is only partially true. Of course I’m faster before I apply the brakes, but only until the corner begins. But then I have to reduce my speed all the more so that I may no longer have the right cornering speed. But that is the key to faster lap times.

Basically, the point is to dose the speed in such a way that the speed is exactly right for the upcoming curve. If we brake too much, we are too slow for the curve and have to accelerate again – a disaster for the lap time! It is similarly fatal the other way around: If we delay too little and have to correct again in the curve, our flow, timing and line are gone. So we have to be able to adjust our speed to the point before every bend. But how do we do that??

We need a point of reference

Step one: First of all, we need a reference point, a so-called braking point, which we can use to orient ourselves lap by lap. Finding it takes experience and a number of laps on the relevant racetrack. Unfortunately there is no rule of thumb. You have to feel your way bit by bit. In the end, it’s about finding the point where we can slow down as late as possible to the highest possible cornering speed for the upcoming corner.

That is only possible with trying and trying again and again – one curve after the other. It is best to start in a curve with an asphalt run-out. If it’s not enough, you have an “emergency exit”, that’s what the run-off zones are for. Tip: Not only physical points on the racetrack such as curbs, posts or patches of asphalt can be a reference point. Speed ​​and gear selection can also help us here if there are no other points of orientation. But be careful, as the word suggests, it is used for orientation, not as a fixed point that always has to be right. Because then we would have to drive like a clockwork like Jorge Lorenzo and reel off every lap exactly the same way.

But we are subject to external influences. Imagine hanging your bike in the slipstream of your opponent and flying along the Parabolika in Hockenheim. You let yourself be sucked in, shear, and pass by. If you set your braking point as always, you’re good – BaMM! – 100 percent straight ahead. Or: In the last left before the start / finish on the Sachsenring, the man in front of you has a harmless slide. Nothing wild, but you have to shut down the gas to do this. Now you will say: “Sure, that makes me slower on the straight, so I can brake later.” That’s right, but where? And can you plan that consciously? Have you ever acted so consciously when things got tight, in the stress of racing, that you always remember exactly what was in the last corner four seconds ago? Humans are creatures of habit, you will brake at the usual point. So my tip: Try something different and deliberately move your braking points during training and check what happens. The same applies as in the previous episodes: Drive as consciously as possible.

“Do you actually brake at the back?”

When I point out to pilots their deficit, namely braking, the question arises regularly: “Do you actually brake with the rear?” A look at the balance of a modern racing motorcycle provides a conclusive answer. As a rule, about 50 percent of the weight of today’s super athletes is distributed between the front and rear wheels. If we now decelerate properly at racing pace (tip: brake straight ahead from different speeds in a large free area in the paddock and feel when the rear wheel lifts), then depending on the situation, the weight will increase to 90 or sometimes up to 100 percent (if that Rear wheel lifts off) onto the front wheel. Actually, the question of the rear brake has already been settled, in this case it contributes very little to the delay. 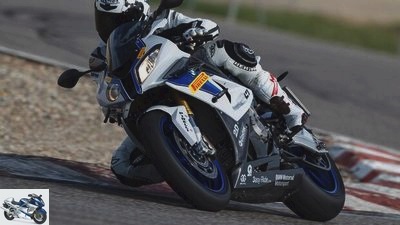 How do I find the right cornering speed? Tires have a limit, but if you want the last tenth, you have to plan for falls.

But I consciously say “in this case”. The rear brake is much more important in other situations, such as when cornering or chicaning or when accelerating. There will be another chapter on this. In any case, it takes a lot of attention to get the balance and timing of the front to rear brakes or to get a rear breaking out of the rear brakes back on track. It looks damn cool when you turn completely across the curve, but whether it goes faster is another matter – and at the moment it’s not an issue for us at all. So my tip: Concentrate on the points above. Find the right braking point and the right cornering speed and you will see that this is the key to faster lap times and a fluid driving style. The next time we will take a targeted approach to braking the Motodrom in Hockenheim in order to basically get the process right.