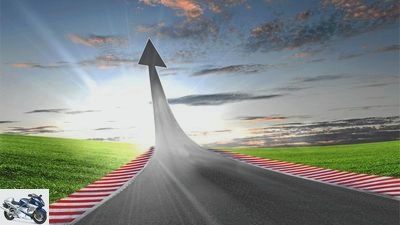 Pascal Eckhardt’s driving tips for the racetrack
Part 2: Mental preparation – why and then what?

Pascal Eckhardt explains how everyone can improve as a sporty motorcyclist. Part 2: Mental preparation.

Why am I doing all this to myself? ”Anyone who has ever taken part in a 24-hour race knows these thoughts. Blisters slowly form on your hands, your bones hurt and at some point you can hardly keep your eyes open from being tired. But not only racing drivers have such thoughts. I am sure that anyone who has ever ridden through the rain for hours on a motorcycle tour has also thought: “Why am I doing this?” Or the race training participant who has taken the big Hockenheim circuit for the umpteenth time drives and just doesn’t go below the two-minute mark – no matter how it hangs in.

Pascal Eckhardt’s driving tips for the racetrack
Part 2: Mental preparation – why and then what?

The goal is a well-groomed “Geil!”

It is in the extreme moments that this question takes on a negative touch. Whoever becomes aware of this and poses the question positively, reaches new shores – but more on that later. Let’s go to the very beginning. It is human habit to do things that satisfy our lust. We do something with the clear goal of being able to trumpet a well-groomed “Geil!” Afterwards. So it is primarily not about the actual activity. It’s more about the feeling afterwards. Or why do we fill out the lottery ticket? Certainly not because it is a lot of fun to put crosses in tiny number boxes. No, we want to win. And the prospect of it makes us feel good. 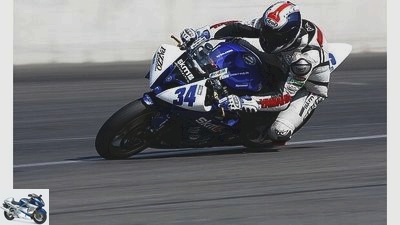 The coach: Pascal Eckhard on the track.

I remember a saying by the world-class athlete Dieter Baumann. When asked if he enjoyed torturing himself like this, he replied “no” and added: “It’s not fun, but I’ll do it for the shower afterwards.” This is where the goal comes into play. We do something because we pursue a certain goal and want to achieve it. If we can do that, we’ll be happy. When asked “Why are we doing this”, the answer is often: “Because I enjoy it.” That may be true, but it is not enough for me. The fun quickly becomes routine and routine quickly becomes boring. Instead, we want to get better, set the goal further, climb the new summit, run further and faster next time or turn around the corner more confidently, accelerate earlier and achieve an even better lap time.

For motorcyclists on the racetrack, nothing is more satisfying than getting the next tenth out of it. It’s hard work, and it starts with the first exercise, setting goals. So once we have answered the question why we are doing this and are beyond the status of “Because it’s fun”, then we can set goals for ourselves. Then you will be able to improve. But be careful: If someone now intends to become champion in a national championship or a Hobby Cup at some point, for example, then that is a good, long-term goal. Neither of us likes to stand still – routine and boredom have already been mentioned. But you have to set yourself many small, achievable goals on the way to the big goal in order to stay motivated.

It is important to combine a healthy level of ambition with a healthy level of reality. If Hanschen Muller plans to sign a works contract with Honda at the age of 39 next season, it is doomed to failure. But if he sets himself small goals and achieves them little by little, he will stay motivated, keep working and possibly get further than some would have believed. Goals can be as different as the people themselves. It is very important that short-term, small goals lead to large, long-term goals. So, set short-term and achievable goals to get to your big goal. We are now formulating a few small goals that you and my PS can go for. In the end, if you work ambitiously and patiently on it step by step, you will achieve better lap times. We are sure of that!

Our common goals will be:

Important: The best place to improve your driving is and remains the racetrack. We expressly warn against doing the John McGuinness on the road based on our driving tips! But take care of the things that have repeatedly spoiled your fun, such as braking behavior, certain corners or different driving situations that you do not like. Make them friends by following them again and again and eliminating the mistakes step by step – but without wanting to break the limit!

Pascal Eckhardt has been riding a motorcycle since childhood, but came to racing late. In 2003 he entered the Yamaha R6 Cup, was runner-up the following year and finally won the Cup in 2006. After that, Allgau Supersport competed in the IDM, celebrated several race wins and made it onto the podium countless times. In 2009, “Ecke” finished third in the IDM championship. At the 24 Hours of Oschersleben, he also achieved a podium in the PS team. In 2011 he hung up his professional helmet together with SKM teammate Christian Kellner. Until an accident last summer, Pascal was also a keen motocrosser. As an instructor, the 36-year-old will be back at the PS-V.I.P.-trainings in the 2013 season.