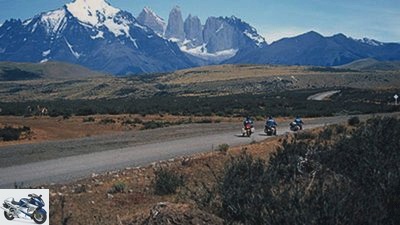 On a motorcycle to Patagonia? Not too much of a challenge to drive on enduros. Harley pilots, on the other hand, have a lot to say when they reach the top of South America after a lot of hardship.

Four Harley-Davidson are lashed to pallets. The destination of the cargo: Buenos Aires. Three weeks later, their riders – Joe, Paul, Tommy and Volker – set off. Their mission: a ruthless test drive to demonstrate what Harleys are made of. The route: from Buenos Aires in Argentina along the legendary “Ruta 40” through Patagonia to Tierra del Fuego, where the penguins say good night to the whales. Anyone who thinks that this is a drive should take a closer look at a corresponding map. There are over 3000 kilometers of gravel roads. Endlessly wide plains without civilization and wind like from a turbine. An escort service will of course stay at home – so no meme tour is guaranteed. Sleep? If so, then in the tent. Meal? Anything that doesn’t offer enough resistance to the Leatherman. Drink? The southernmost beer in the world. Toast: It’s not the end of the world, but we can see it from here.

The motorcycles: Paul drives a 1946 Knucklehead, manually shifted and foot-coupled, with two monumental 19-inch wheels hanging from its rigid frame. Joe’s 1947 Knuckle is practically identical but has a travel-friendly five-gallon tank. Both roll over the South American slopes without rear suspension and with only minimal front wheel damping. Tommy’s yellow 1200 panhead, also with a rigid frame, consists almost entirely of accessories and has already proven itself a few years ago in the knee-deep Panamanian mud (see last page). In comparison, the Volkers Evo-Sportster, born in 1995, looks like a real Dakar bolide: longer suspension travel, large aluminum tank, additional headlights, cladding, studded tires and mega aluminum boxes for heavy photo equipment. 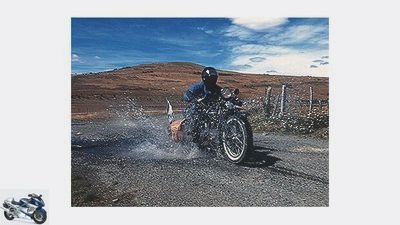 Not for clean men: the Harleys literally went through thick and thin.

False start: Already on European soil, the tight schedule of the four Patagonian riders is out of joint: The plane with the machines on board is in Amsterdam. With irreparable defect. In the meantime, the four adventurers slide through the Argentine customs and experience the South American steamy climate (37 degrees Celsius, humidity 99 percent) with full force. And the hospitality that will inspire you again and again over the next few weeks: Alberto, previously only known through telephone contact, and his friend Flavio set up the reception committee, organize a mega barbecue party – a so-called Asado – and finally lodge the family so that the guests can go to bed. A visit to the local MC Epidemia arouses further sympathy for Argentina: huge property, comfortable house, well-kept pool. A couple of rags of meat and two or three beers help get back to bed. The next day the good news: The bikes are there, earlier than expected. They are freed from their wooden cages with heavy equipment, the equipment is sorted and repacked. It should start tomorrow.

Now is tomorrow and it is pouring like buckets. So first of all relax and finish packing. At some point the rain subsides and the first miles of the Argentine road are due: 400 kilometers on the “Ruta 3” to Azul. Mandatory visit to the Globetrotter meeting place “La posta del viajero en moto”: a modest hut full of gifts, pictures, stickers and greeting postcards from motorcyclists from all over the world. The day ends traditionally: Asado, beer, bed. Behind Azul, it’s totally flat. The eight cylinders thunder over the port city of Bahia Blanca to Pedro Luro. That’s 550 kilometers. The first attacks of weakness: Tommy’s rear brake caliper has said goodbye, as have the springs on his chair – especially uncomfortable with a rigid frame, of course. The first UPS delivery from home is launched. Tommy has to keep moving unsprung and partially braked.

South America’s diverse landscapes are no longer an insider tip? a trip to Patagonia is still something special.

Documents
A passport is sufficient for Argentina and Chile (and for all other countries in South America). Officially, a Carnet de Passage is no longer required for the motorcycle – unless you enter via Buenos Aires Airport. However, some motorcycle globetrotters report that they were able to receive their vehicle there without this document. A good forum for relevant questions can be found on the Internet at www.horizonsunlimited.com. International driver’s license and vehicle license are compulsory.

General
Chile and Argentina are ideal entry-level countries for those new to South America. Much is reminiscent of Europe, and the infrastructure in the tourist-oriented centers is very good. A range of 350 kilometers (plus a petrol can on some stages) is sufficient; the route down to Tierra del Fuego is – apart from some windy days and one or the other hearty gravel passage – can be mastered with any common enduro without any problems. Even the loneliness is relative: In the high season between December and March, which is short in these latitudes, you will meet a surprising number of travelers heading south. Simple guesthouses can be found in every settlement, and wild camping is nowhere a problem. Information on this can be found in any good travel guide such as the “South American Handbook” from Footprint Verlag. This English-language standard work is updated annually, can be bought in any good bookstore and costs 40 euros. 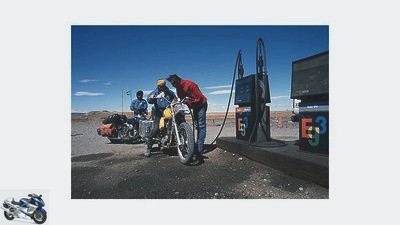 Somewhere in the middle of nowhere, but refueling is also possible here.

Finally the longed-for shield. So this is where Patagonia begins. And behind Viedma there is nothing. All right, the street, but otherwise – nothing, nothing, nothing. Not even a curve. Cattle hides are drying over the fences, the heat blows on their faces, but the bikes are purring. In San Antonio, the four of them decide to prottteln to the coast. Las Grutas, a small seaside resort, promises refreshment. Less refreshing: the hand-soldered antenna internet connection – so again no photos to Germany. The next day the area around the “Ruta 3” continues to appear godforsaken. Only the afternoon branch to the Valdes peninsula brings variety: guanacos, ostriches and armadillos, later penguins, sea lions and sea elephants. End of the stage in Puerto Pirámides. Belly full and bed – with a view of the sea. Tomorrow the route will be made again.

So be it: At noon the four roar through Trelew, from there on Ruta 25 to the west. 180 kilometers through the steppe. Far, hot, barren. As a result, there is only a short refueling stop in Las Plumas, then continue to tile to the Valle de los Martires. Everyone’s eyes open there and their jaws drop: The Valley of the Martyrs is peppered with incredible rock formations. Pointed needles, table mountains, canyons. It remains monumental. Only the villages are getting smaller and smaller – and the straights longer. Not a single bend in the 200 kilometers between Paso de Indios to Tecka, a disheveled nest around a gas station. Then finally the “Ruta 40”. The first rubber rub on a street legend – the ignitions of the V-Twins suddenly seem to sound more solemn. The four of them chug along the Rio Tecka to Esquel. High time for a day of washing, sending pictures and bike care. Tommy met someone the night before, who knows someone, who knows someone who can weld his saddle, perfectly, including the reinforced bracket. Almost at the same time, Ricky from Bariloche brings the long-awaited anti-breakdown express shipment: the brake caliper. 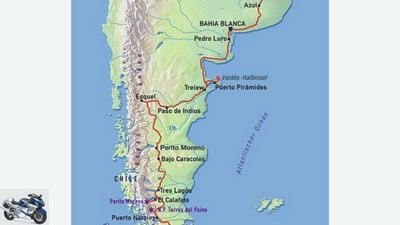 The route: 3000 kilometers from Buenos Aires in Argentina along the legendary ?? Ruta 40 ?? through Patagonia to Tierra del Fuego.

No more fun: The hobby idiot is over, 400 kilometers of “Ruta 40” are on the map: via Gobernador Costa to Rio Mayo. The first gravel sections give a foretaste. The next day it is clear: The “Ruta 40” separates man from Memme. The boys are itching over a nightmare made of river pebbles. More than 40 km / h is not possible for the rigid frame. After five hours of gravel surfing, Perito Moreno is reached. The Harley drivers celebrate their arrival with a couple of Israeli gringos who want to hitchhike. Great idea – if you want to keep your thumb in the wind here, you definitely have enough wind. But cars?

At breakfast it is rumored that from Perito Moreno the “40” is better. And fact: the gravel becomes more comfortable, 50 to 80 things are in there in places. The landscape is still barren, here and there a few decorative volcanic cones and table mountains garnish the way to Bajo Caracoles. 230 kilometers should be unwound today. It’s over after 50 – when you downshift, Tommy’s Pan’s rear wheel locks and a greasy puddle of oil spreads out under the gearbox. This does not look good. As ordered, two German mountaineers (gracias, amigos!) Come by with their pick-up and ship the Panhead back to Bajo Caracoles. The diagnosis is made in a tire workshop: the gearbox housing has torn from top to bottom. A major setback. Tommy orders a new transmission from home via satellite phone. For a large stack of US dollars, he and his bike are rocked to El Calafate by pick-up. For the others it means to get up early, pack the bikes and get back on the “Ruta 40”.

One day later. Still gravel to the horizon. Littered with potholes in which a sheep would easily disappear. The mopeds are tough. Only Joe’s steering head nut and the cover plate underneath vibrate, but can be collected and installed. Go on, go on, go on. The “40” remains catastrophic. Then, after five brutal days, finally tarmac again. You blessing of mankind, you smoothest of all road surfaces, you black runway in the V-twin sky. Finally upshift, finally relax on the route again. Bienvenidos in El Calafate with Tommy, who is still waiting for the gearbox. Two days later I finally got some information, but a bad one: the gearbox hangs. Namely at customs in Buenos Aires. Allegedly the shipping documents are not correct. A customs agent is needed. He wants $ 200 to solve the problem.