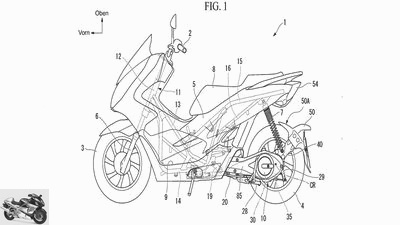 1/4
A tubular steel frame forms the backbone of the new electric Honda scooter, the motor sits in the swing arm, the two batteries under the seat. 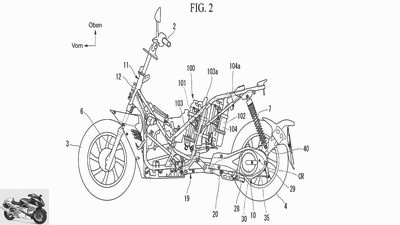 2/4
Honda plans to install the control electronics and the charging device behind the fork. The concept does not offer much storage space. 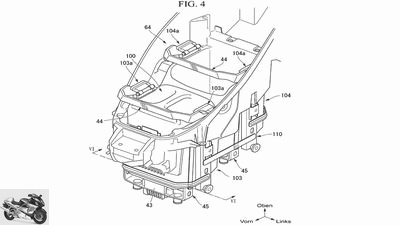 3/4
The two batteries are removable. The shape is already similar to that shown at Eicma in 2019. 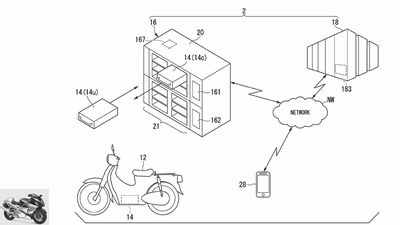 4/4
Honda would like to offer the batteries for exchange at such stations.

Honda’s plan is to bring its first 125cc electric model by 2024, as well as a battery replacement system. A new patent for an electric scooter provides further news

Honda wants to bring the first electric 125 cc on the market by 2024. A corresponding motorcycle has already been patented. Most recently, Honda had the system of exchangeable batteries protected. A system that also carries the current patent for an electric scooter.

Motor in the swing arm

The entire electric world that Honda wants to build continues to take shape. The still young patent from Honda shows a rather large scooter with a long wheelbase, tubular steel frame and a large fairing on the front. The motor sits in the swing arm and drives the wheel via an intermediate gear. It would be logical for Honda to reduce the high speed of the engine with this one gear in order to cover a long speed band with the high torque. If the scooter is designed for the 125cc class, then it can provide a continuous output of 11 kilowatt hours, but the peak output should be a lot higher. For a longer range, it would therefore make sense to use the motor with a peak power of 11 kW.

Two batteries on board

The engine is to be supplied with two batteries, which are stowed directly under the seat bench. Honda thinks of a voltage between 48 and 72 volts. Similar to the E-Technology system, both batteries can be removed and exchanged at the planned exchange stations. The safety technology is particularly important to Honda, so that the batteries cannot under any circumstances generate an arc when they are removed. The batteries are also protected against each other during operation using diodes: If one battery breaks, the second is protected against short circuits. When charging, in turn, the controller decides whether both batteries are charged at the same time or one after the other. In this way, the gentle state of charge (SOC) can be maintained at 80%. All in all, the two batteries enable a high degree of mobility: Both batteries are never suddenly empty at the same time, in an emergency one battery can also be used and the battery life increases.

Honda not only makes plans, but also implements them. From the strategy to the infrastructure to the product, the first step in hondas e-mobility on two wheels has been taken. The only thing missing is the step from paper to the showrooms. But that shouldn’t be too much of a challenge for Honda either.