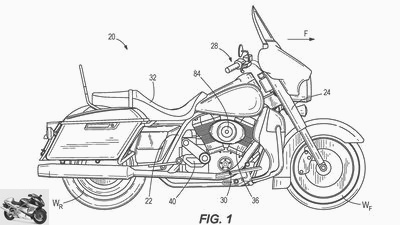 1/9
Harley would build a compressor behind the engine on top of the gearbox. 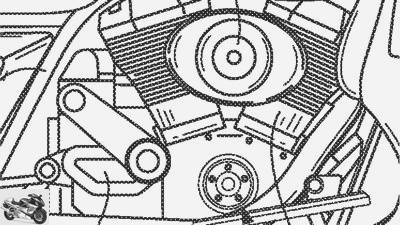 2/9
The drive is supposed to be done by a belt, but according to the drawings, the power comes more from the gearbox input shaft than directly from the crankshaft. Which would make sense in terms of rotational irregularity. 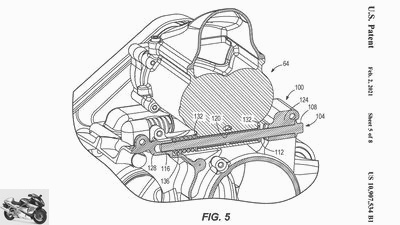 3/9
The compressor appears to be a screw compressor, which would explain the two semicircular housing parts. 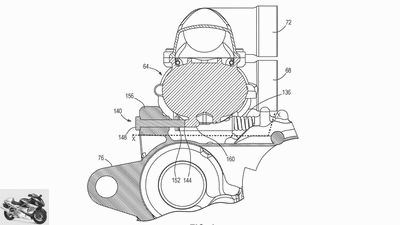 4/9
The elongation of the belt should be compensated for by an automatic tensioning system. 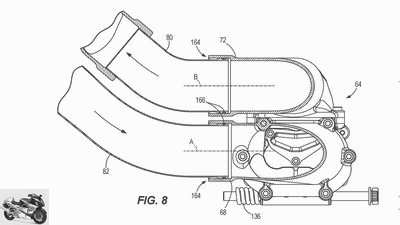 5/9
In the direction of travel on the left, pipes or hoses lead the air into the compressors at the bottom and out again at the top. Then either directly to the injection or via a possible intercooler. 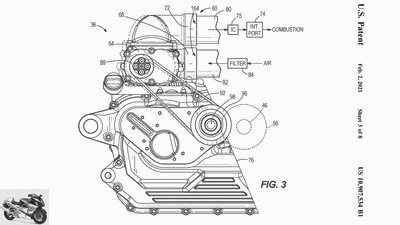 6/9
The compressor is probably sitting on the gearbox and is driven by a belt, whether directly via the crankshaft or the gearbox input shaft is unclear. 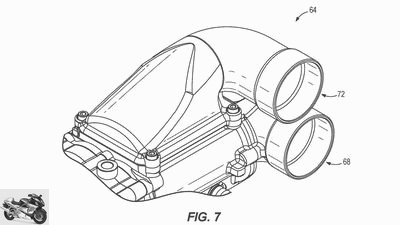 7/9
The detailed drawing of the air duct on the right, however, suggests that development work is already underway. 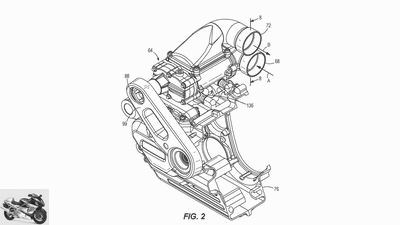 8/9
Also shown quite clearly is the belt of the compressor that could be covered. 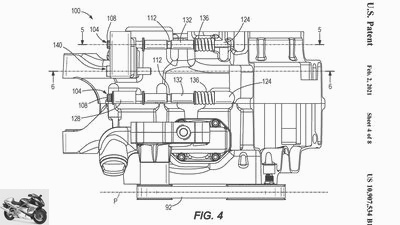 9/9
The compensation system that Harley wants to use to adjust the belt play also appears to be quite sophisticated.

Patent for Harley-Davidson with compressor

Harley-Davidson is probably working on one or more systems to charge the V-engines using a compressor. The compressor will probably be placed on the gearbox of the current Milwaukee-Eight engines.

A very good example that manufacturers are also working on things that are very far from reality is shown by a new patent from Harley-Davidson. Here the motorcycle manufacturer registers a supercharging, more or less explicitly for its V-engines for a patent. The compressor is to be placed on the gear housing and driven by a belt. 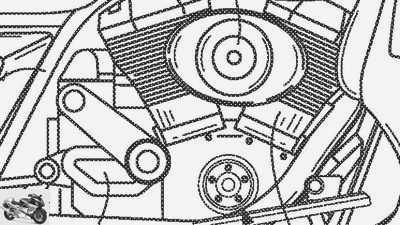 The drive is supposed to be by belt, but according to the drawings, the power comes more from the gearbox input shaft than directly from the crankshaft. Which would make sense in terms of rotational irregularity.

What can it do?

The arrangement and construction of the compressor with two shafts shown suggests a screw compressor. Here two spirals rotate in opposite directions. One spiral is convex, the other is concave. The air is compressed in this volume between the spirals, which becomes smaller and smaller during the rotation. The advantage of this design is that the masses are completely balanced and a large volume can be conveyed from the first rotation. This is a good thing for torque-stressed engines such as a long-stroke V-2. Thus, for example, Harley could lower the speed levels without losing peak power while increasing torque at the same time. Win-win-win for air-cooled long-stroke mallets. As a result, consumption and emissions can be reduced. A scroll charger like the one Kawasaki H2 like a turbo, it shows its advantages at medium and higher speeds. 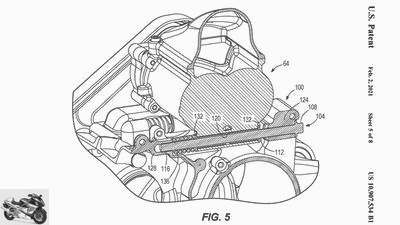 The compressor appears to be a screw compressor, which would explain the two semicircular housing parts.

Harley-Davidson places the compressor behind the rear cylinder on the gearbox. The logical solution from the point of view of installation space. From a thermal point of view, however, this is not the optimal choice, as the rear cylinder in the slipstream of its front counterpart is structurally exposed to high temperatures. In addition, this results in very long air ducts. Especially if you also take into account the charge air cooling provided as an option in the patent specification. 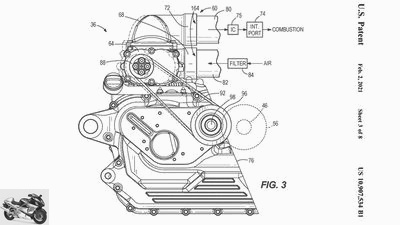 The compressor is probably sitting on the gearbox and is driven by a belt, whether directly via the crankshaft or the gearbox input shaft is unclear.

Another indication of a development that is rather far removed from series production is that Harley-Davidson The patent does not specify how the compressor is driven. A belt with an automatic tensioning system is mentioned several times, but where it is driven from remains unclear. The drawings indicate a drive via the gearbox input shaft, which, due to the system, has a lower speed than the crankshaft, but would compensate for the irregular rotation of the engine. But the drive via the crankshaft would also be conceivable via an intermediate gear. Depending on the configuration, however, either speed differences or the direction of rotation might have to be compensated for using the pulley pairings on the charger.

What do you think of supercharged motorcycle engines?

I find a very interesting concept.

Something like that belongs in the car. Motorcycle engines thrive on speed.

So far it is only a patent from Harley and against the background of the restructuring Hardwire It probably stays that way. Sure, the compressor is awesome, but whether such expensive, heavy technology is needed by a company that wants to act in a forward-looking manner is questionable.