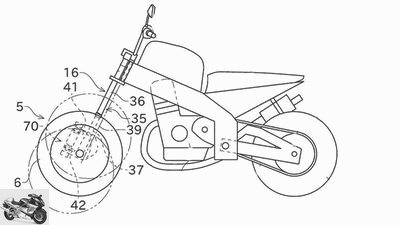 1/4
Kawasaki has a patent for tilting technology with three wheels. The big difference to the previous techniques from Piaggio or Yamaha is the central position of the deflection between the wheels. 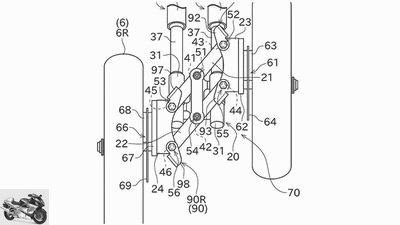 2/4
Kawasaki could easily transfer the system plug and play to almost all frames via the steering head. 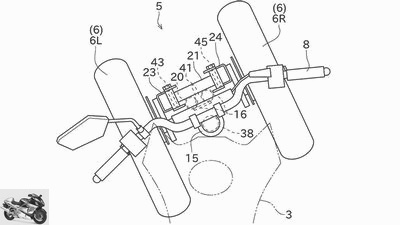 3/4
Such a system would virtually double the variety of Kawasaki models overnight, which is certainly interesting for small displacements. 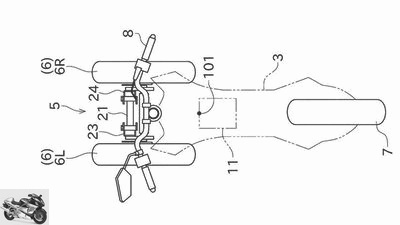 4/4
But in contrast to the known mechanics, the system increases the unsprung mass of the motorcycle enormously. Expensive carbon could help here.

Patent for a tricycle with tilting technology from Kawasaki

Since the MP3 from Piaggio, the market for three-wheeled scooters with tilting technology has grown steadily and with the Yamaha Niken has also expanded to the motorcycle segment. A patent now shows that Kawasaki is also thinking in this direction, with a very simple system.

All motorcycles with tilting technology and three wheels are based on an extremely complex development process, which, apart from the engine and parts of the final drive, does not have any synergies with other existing components. The patent of Kawasaki shows a different approach and combines a conventional telescopic fork with a steering knuckle system to accommodate the tilting technology and the two front wheels. 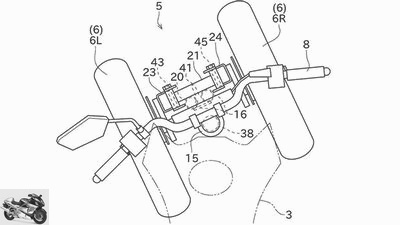 Such a system would virtually double the variety of Kawasaki models overnight, which is certainly interesting for small displacements.

The supposedly simple assembly of the system in a normal motorcycle or scooter frame, of course, lets you look far. Kawasaki could clone so many models and bring them to market as three-wheelers. Probably not a ZX-10 RR, but anything with 400 cubic meters and less could be placed several times in the markets. But of course it also makes the science fiction brain rattle: What if, in the near future, everyone uses an app in the digital garage to indicate how they want to drive today? My two-wheeler could turn into a tricycle by changing the fork. Beam, me up, Kawa. 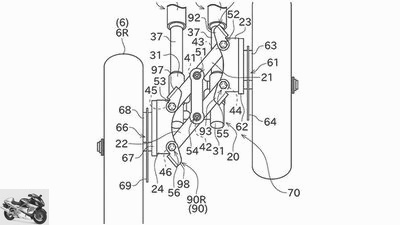 Kawasaki could simply transfer the system plug and play to almost all frames via the steering head.

But the simplicity of the Kawa patent could also cause problems with driving dynamics. Since the heavy deflections to incline are all exactly between the wheels, sometimes under the center of the wheel axle, the unsprung masses may increase enormously. This explains the difference to the systems from Piaggio, Yamaha and Quadro: Here the deflections are part of the sprung mass, their mass has no influence on the steering forces. But with an appropriate choice of material, such as carbon, Kawasaki could also counter-articulate here, but this would increase the price significantly.

As simple as the system seems, the concept could also be problematic in terms of unsprung masses. Still, it is interesting to see what the manufacturers are doing in their closets.