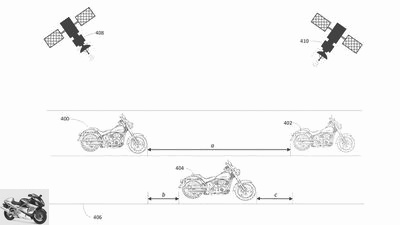 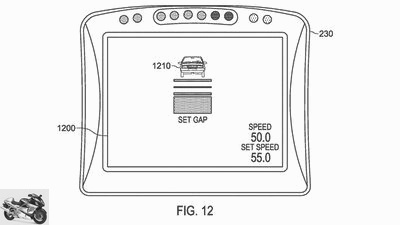 1/4
Using GPS tracking, motorcycles with adaptive cruise control should receive more precise speed information, which should compensate for the tolerances of different systems.

2/4
Harley’s patent for an adaptive convoying system via radar can adjust to several reference vehicles and regulate accordingly.

3/4
The system regulates the distance to the offset driver, but also maintains a distance from the person in front of you.

4/4
When overtaking, the system reacts by quickly adjusting the speed in order to maintain the old distances again after overtaking.

Patent: Harley wants to adaptively drive in a convoy

Adaptive cruise control is increasingly being used in series. Harley-Davidson has now patented such a system that uses radar and GPS to monitor the speeds and distances of other drivers and also includes convoy driving, which is so popular in the USA.

The fine art of driving in a convoy requires a lot of practice and a lot of strength and concentration. Constantly controlling one’s own speed, the distance to the vehicle in front and to the sideways moving motorcycle, quickly push human sensors to their limits. But also the radar technology, which is increasingly finding its way into series production in corresponding vehicles, seems to be reaching its limits here. At least that leads Harley-Davidson so in a current patent specification: The current systems could only interpret the person in front of you, someone driving laterally would either not be recognized or recognized incorrectly and the set distance would be on “new” Object oriented, which would technically prevent the popular group driving.

Drive safely in a group with GPS and radar 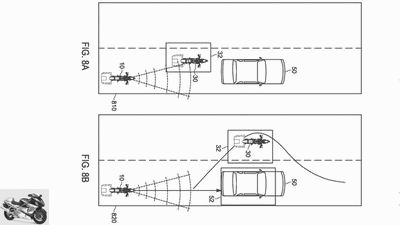 When overtaking, the system reacts by quickly adjusting the speed in order to maintain the old distances again after overtaking.

As is so often the case with patents that deal with adaptive systems deal, the manufacturer keeps open how the environment should be registered for a long time. Radar seems to have caught on for the first time today, but Harley’s description explicitly mentions a camera with stereo vision, i.e. 3D. In the introduction of the document, the use of radio waves (radar), lasers (lidar) or ultrasound is not excluded. No matter how: In combination with another new patent from Harley, which enables an absolutely precise speed adjustment of the cruise control via GPS, the company would like to automate the popular convoy to a great extent and relieve drivers of a lot of work. He would only have to take over the steering – for the time being.

What and how does the system recognize this?

Harley’s patent for an adaptive convoying system via radar can adjust to several reference vehicles and regulate accordingly.

The system that Harley has protected recognizes the driving situation in front of, next to behind. If the existing systems have so far only been able to interpret other road users directly in advance and to adjust the speed and the distance, Harley plans to include the drivers next to him in the decisions of the system. For this purpose, the driver should see other motorcycles in front of and next to him on the display and he can virtually activate a follow mode for each vehicle. According to the Harley patent, it can do this with a button, joystick or even voice input. In the convoy, the motorcycle is in front of you and offset to the left or right. Whether the system displays warnings when the neighboring vehicle slowly but steadily approaches laterally at a distance is not described, but an overtaking situation. Here the system registers the attempt at overtaking by the vehicle in front and protects itself first by adapting the current speed to that of the vehicle to be overtaken. After overtaking, the system catches up with the vehicle in front again and maintains the distance.

What does all of this have to do with GPS?

Using GPS tracking, motorcycles with adaptive cruise control should receive more precise speed information, which should compensate for the tolerances of different systems.

The second new patent from Harley describes a GPS-based cruise control system, an adaptive cruise control that does not get the speed from the motorcycle, but from the satellite. This is much more precise, compensates for tolerances of different tire sizes or tuning measures and, above all, can compensate for the calculation differences of different distance systems and can therefore also be used on motorcycles that do not have the necessary installation space for radar systems or the like. In other words: The slim Street Bob could then behave just as adaptively in the convoy as the Road Kings to each other. In combination with the patent for convoying or platooning, Harley is also opening up to a certain extent to the current measures in the V2X communication. In other words, the exchange of data on the position and speed of vehicles that do not even see each other. But this not only requires a GPS antenna, the motorcycle would have to be equipped with an antenna at almost every end and side. This is the only way to determine the correct position.

Distance systems, radar, lidar, ultrasound, V2X. All of this continues to increase in driving safety and comfort. Where does the impulse come from? Hen and egg. Which came first A manufacturer who starts with it or the knowledge of all manufacturers that they still have potential here. As many manufacturers are currently operating in the field, as a severely injured person I do not care where it comes from. It’s just supposed to come.