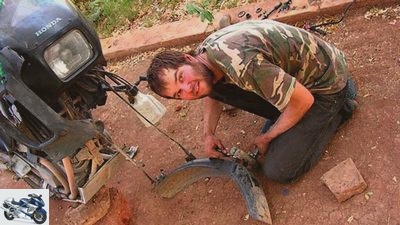 People and their motorcycles: Through Africa with the Honda Transalp

People and their motorcycles: Through Africa with the Honda Transalp
Africa – a motorcycle experience report

It’s amazing what a production motorcycle can withstand when it has to. Tobias Dreissig reports on his unusual tour through Africa with an unusual travel enduro. 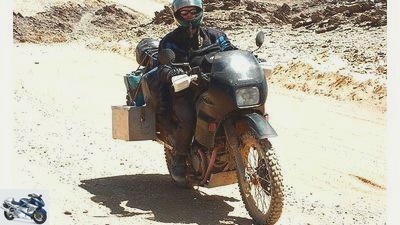 One man, one bike – there is something that holds more together?

I wanted a good motorcycle. It should combine suitability for everyday use, reliable, low-maintenance technology and sufficient performance with moderate fuel consumption and not cost a lot. The 1992 Honda Transalp came in at just the right time with 18,000 kilometers for 500 euros. After an accident it was a total economic loss. With a used fork and a number of trim parts, it was ready to drive again.

I mounted the fender high and the CDI lying down, because the plug connections of the ignition box had turned out to be weak points, as they tend to break off when the seat bends. the Transalp became my constant companion, who even in difficult situations let me down less often than many women. We often kissed the ground together, drove to university and on vacation in the rain and snow. So we came to Tunisia or through Croatia, Montenegro and Albania to Greece. Every 12,000 kilometers she got new engine oil and about every 20,000 kilometers she got new tires. 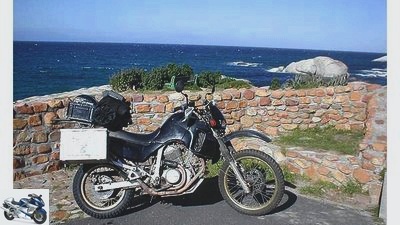 With the Honda Transalp through Africa – a dream for the author Tobias Dreissig.

When the machine had almost 60,000 kilometers on the clock, I decided to use it to fulfill my dream of a trip through Africa. With a self-made, stable engine guard made of sheet aluminum and self-made aluminum suitcases with a built-in 230-volt converter, she was transported to the long-haul motorhome. In addition, the frayed clutch cable had to be replaced, and the choke sliders, which tend to jam due to lack of use, had to be made operational. For the first time I checked the valve clearance. As expected, it was within the tolerance range.

The weakly dimensioned rear wheel bearings lasted as far as Egypt. There were spare parts everywhere on the roadside. In Sudan, the lower steering head bearing succumbed to the fine sand that penetrated during a storm. Because no spare part was available, the upper tapered roller bearing in the lower seat had to do its job from now on, and a normal roller bearing at the top gave at least the necessary lateral support. There were no other defects up to South Africa, although I kept falling violently with the loaded bike on bad stretches of road. In Kenya the Transalp got fresh oil and a new filter. 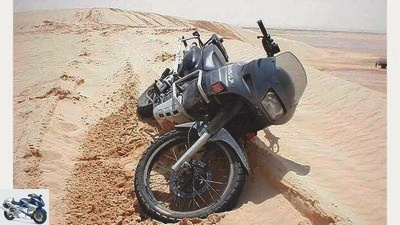 Enduro also needs a break from time to time…

That’s it. She easily climbed the 2873 meter high Sanipass in the Kingdom of Lesotho and crossed knee-deep rivers in the legendary Baviaanskloof in South Africa. Occasionally we also had to go down. No problem. But in a sudden landslide, we fell a good 20 meters. With the help of nine police officers, it was possible to pull the smashed machine out of the gorge on a rope and bring it back the 100 kilometers to the paved road in an off-road vehicle. 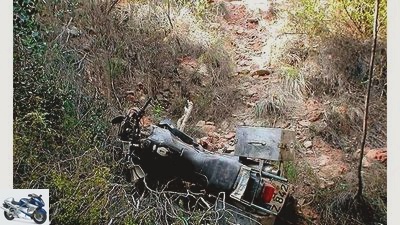 Tobias and Transalp fell into a 20 meter deep gorge. The machine is badly damaged, but the engine starts without complaint.

The wreck’s engine started as if nothing had happened. Without front brakes, speedometer, mirrors or headlights, we continued our journey to Port Elisabeth. Here my motorcycle was restored to good condition. It got new oil, Mitas E07 tires (the first set had withstood 20,000 kilometers in Africa), a new set of chains, a brake pump, mirrors and a small lamp mask that made it look better than ever. The bad roads through Angola and the hot Congo on the way back to Germany demanded a lot from the heavily loaded Transalp. 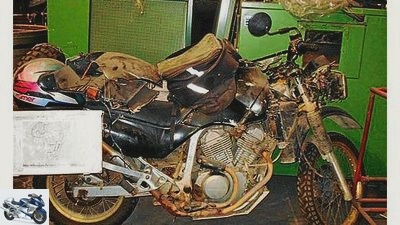 In South Africa, the Transalp wintered in a paint shop. After that, she was wrapped in paint dust. Anyway, continue.

However, it lived up to its reputation as a reliable touring motorcycle, diligently fanning itself with its fan on difficult sand passages and never faltered. The rainy season began on the way from Cameroon to Nigeria. We sank into the mud, but managed the 250 kilometers to the border anyway.

After we escaped at full throttle from a robbery in which someone hung themselves on the back of my suitcase and tried to stop me, the motorcycle at Mercedes in Asaba was freed from the sticky mud with a steam jet. It got new engine oil from the car dealership and nothing could stop it. Even when the driver of a Toyota Landcruiser rammed us at high speed in Mauritania and the Honda was thrown through the air with me, the damage was limited to the completely dented aluminum case and the failure of the entire rear lighting. 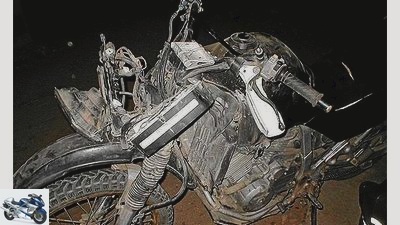 Such a Transalp must be broken, right? Here shortly before the reconstruction. Certainly not the last …

It safely brought me to a small workshop in Morocco after the rear wheel bearings had said goodbye again. The exchange took less than 30 minutes and cost ten euros. Including new bearings. We are now back in Germany. My Transalp has 100,000 kilometers on the clock and is back in top condition with a number of new parts. Oil consumption was not measurable, the valve clearance was still within the tolerance range. We are ready for new stress.

The Honda Transalp is being upgraded