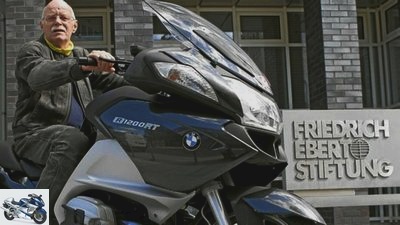 A quick obituary
Politicians and motorcyclists: Peter Struck is dead

Of course, Peter Struck is best known as an SPD veteran and defense minister, but he has also done a lot for German motorcyclists and motorcycle culture.

Without him, for example, the Bundestag’s motorcycle rides would hardly have taken place. According to various reports, Peter Struck died at the age of 69 after a heart attack in a Berlin hospital. In 2011, MOTORRAD conducted a major interview (see below) with Struck, who was never Minister of Transport, but who stood up behind the scenes for the interests of motorcyclists. 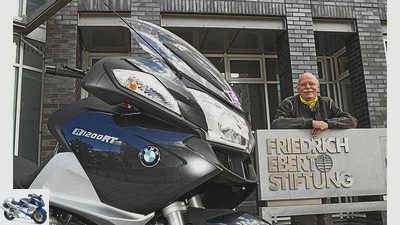 Peter Struck (former Federal Minister of Defense) has been head of the Friedrich Ebert Foundation since 2010.

Peter Struck: “I have a MZ bought by Theo Waigel”

At his workplace in Berlin, SPD veteran Peter Struck (68) gave MOTORRAD insights into how politics works in the capital – and how he himself.

Are you actually sitting here because of us, or wearing motorcycle gear to the office every day?
Struck: No, not because of you. I drive, iron. Of course I also have a company car, but it’s only for really bad weather. A State Secretary from the Foreign Office was here earlier. At first he looked like that, I say: “I ride a motorcycle.” Does he mean: “Yes, me too”, and that he’s just considering which one to buy! We then talked about a few models. He thought that was good.

Where are you most often?
Struck: I live in Uelzen, that’s 300 kilometers from where I work. If I can, I drive the country road to Berlin, around the back, through the Brandenburg region, not the autobahn. Every week. I just traded it in on my last motorcycle, also a BMW RT, and covered 65,000 kilometers in three years. That’s over 20,000 a year. My current motorcycle already has 5000 down.

You were Federal Defense Minister here in Berlin from 2002 to 2005, and you had one
crowded schedule and many commitments. How was it at that time?
Struck: I also drove a lot back then when I still had personal protection. I just associate the enjoyment of driving with the need to get from A to B, but it is still enjoyment. Uelzen – Berlin has always been my home route. In principle, this goes parallel to the old transit route. It’s great, very village, rural, nothing going on, and then every now and then there is a stork on the street. I go there every week.

How can you imagine that, on a motorcycle, but with bodyguards?
Struck: When I was still a minister, 18 people at the BKA were responsible for me as bodyguards. I told them: “So guys, I need at least six to ride motorcycles now.” Then they organized it. For them I was the most popular commando in the whole of the BKA. They went on vacation with us, riding motorcycles in California, through Death Valley, in Colorado and in South Africa. When I meet them today, they still rave about – well, they always had to go hiking with Hans Eichel.

Still have personal protection today?
Struck: No, I could have had a command, but I didn’t want that anymore. As Defense Minister it was different. Since I was security level one, you need that. After that, as group chairman, too, but it’s over now.

You, of all people, as Federal Defense Minister a. D. once owned an MZ of the National People’s Army of the GDR. How did that happen?
Struck: That’s right. At that time, after the session, I started driving again, with an MZ that I actually bought directly from Theo Waigel. We were in very good contact and are friends today. At that time it was said that there was an MZ from these border troops that was available for 250 marks. I said: “Theo, sell me that thing.” (Editor’s note: As Federal Minister of Finance, Waigel (CSU) was responsible from 1989 to 1999 for the federal collecting society Vebeg, which auctioned part of the NVA holdings.) And Waigel actually organized that the Struck got bikes. Then I went with the MZ for about half a year. But of course that was nothing, it had a six-volt system and stayed standing all the time. I got a BMW soon afterwards. 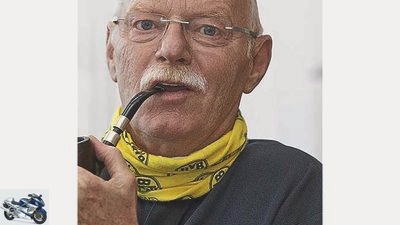 The ex-defense minister is known for his whistle, bike and clear words.

They say: “started driving again”, how come “again”?
Struck: I’ve always ridden a motorcycle, got my motorcycle driving license as a teenager, then immediately rode a Heinkel motor scooter, then a motorcycle, soon to be a BMW. It wasn’t until our children were born that my wife said I wasn’t allowed to drive anymore. Between this time and the MZ there are 20 years that I took a break.

And what does your wife say today?
Struck: Today she knows how much I love motorcycling and doesn’t forbid me to do it. But she doesn’t sit on the back either. I get that, I don’t sit on the back of someone else’s either. Especially since I’ve already laid down a couple of times. Something like that is happening now.

what happened to you?
Struck: Once I broke two ribs on a Bundestag motorcycle tour. What else have I broken? I think the thumb. Once I was just too leaned and the profile no longer held. Then on the Zillertaler Hohenstrabe,
it is extremely difficult to drive, so I also lay down, something also broken, but otherwise it worked.

Which route was your personal highlight?
Struck: Death Valley in the USA, a grandiose landscape, we had 52 degrees there, and then we rented Harleys, unfortunately. I would have preferred BMWs, but they were too expensive, at least significantly more expensive than a Harley. But of course we worked with them too. (Stuffs his pipe.)

What is your love for BMW based on??
Struck: Well, I’ve always driven a BMW, even before, except for the short MZ interlude. I love the boxer, he’s hard to beat when it comes to reliability.

And the new six-cylinder would not be something for you?
Struck: Well, I’ve just been to Croatia with friends. One of them had a K 1600 with him. It’s not for me. I don’t need a rocket like that either. 180, 190, I don’t drive faster. And only on the autobahn.

The motorcycle industry ever wanted you to advertise?
Struck: Yes, there was probably an inquiry once, but I don’t advertise. I am the patron of MEHRSi, who came up with me because of my motorcycle tours. Otherwise I don’t advertise. Only here, for my club (points to his Borussia Dortmund scarf, editor), I am a member and on the economic council.

Wouldn’t you have liked to become Minister of Transport??
Struck: Ah, no, that wouldn’t have been anything for me either. As the parliamentary group chairman, I only once agreed with the Tiefensee (Federal Transport Minister 2005 to 2009, SPD, Red.) That he should make a regulation that would allow motorcyclists to drive through in traffic jams on the autobahn. It sucks when you stand there in your clothes and the sun is beating down. Then there was also a draft. Unfortunately nothing came of it because of the change of government. And once, that must have been in 1999 or 2000, a colleague from my group came up with the idea of ​​placing number plates in front of the road traffic regulations for motorcycles. I then said: “Over my corpse.” Because of the speed cameras and that’s what she wanted … (grins)

An initiative like allowing people to drive through the traffic jam, how can it simply disappear again when everyone involved has already agreed that it makes sense?
Struck: Normally you need two or three members of the Bundestag who really stick to something, stick their teeth and keep digging. Those in the ministry usually don’t see something like that. The ministerial officials crouching around usually don’t ride motorcycles. You have to build up political pressure so that at some point the minister will say, yes, we’ll do that. And we were about to do that. But I don’t see anyone in the Bundestag at the moment, I don’t mean any MP who is committed to motorcycle issues.

And from the outside? As Defense Minister you have certainly seen a lot of lobbying. Is there such a thing for motorcyclists too?
Struck: Sure, there are. But of course it is not nearly as effective as that of the defense industry. There is a lot more financial power and a lot more jobs behind it. But the Motorcycle Industry Association (IVM, Red.) Is already very active. Especially during the Bundestag motorcycle tours, IVM boss Reiner Brendicke uses the opportunity to talk to Solms (FDP finance politician and Bundestag vice-president, editor) or to me.

Why do you think Peter Ramsauer, as acting Minister of Transport, has now introduced the new, small motorcycle license plate?
Struck: I don’t know, I don’t know. I had thought about the traffic jam story-
and driving through, whether I should step up to the Ramsauer again. I know him very well, he’s been around for a long time. But you shouldn’t have any illusions about that. If you are no longer a member of parliament, you no longer have any influence. Who is out is out.

That probably means that no more movement is to be expected. Road closures, bitumen, dangerously sharp-edged crash barriers … there is something going on for motorbikes?
Struck: I don’t see – unless I’ve missed something – that anything is happening. At least I don’t see any major government initiatives. The ADAC, MEHRSi or even you from MOTORRAD have to put pressure on that. But, as I said, we also need MEPs who commit themselves to something and say that I will push through that now.

Are route closures understandable for you??
Struck: Yes, I can understand. I know it from the Eifel. When a community
closes a route on which someone actually drove himself to death every weekend, then I can understand that, yes. 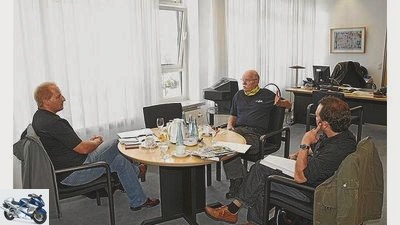 In his office, Struck received the MOTORRAD editors Jorg Lohse and Michael Schumann.

What could make motorcycling even safer in your eyes??
Struck: Well, you can think about regular, maybe even mandatory safety training. Otherwise, well, safe clothing. But on a voluntary basis. And it doesn’t have to be that the stand 300 is running. Who needs that? None!

So a maximum speed limit? Where, then?
Struck: Well, 250 would be enough.

You are 68 years old. There comes a point where you say it’s the end of motorcycles?
Struck: Hmm, I have to go to the clinic next month – a new knee joint. The old one no longer works. Yes, the point will surely come one day. But I have to say – with the exception of the family – that motorcycling is the best thing I can do for me. For me this is absolute relaxation. It was when I was a minister. It was often really stressful, for example with Rumsfeld (former US Secretary of Defense, editor) because of Iraq and Afghanistan and all that stuff. So I sat on my goat and was completely free. In the office they always told me all, “You’re crazy?”, when I wanted to ride my motorcycle to appointments. The company car was just following behind. That was just the best thing, it still is today. I hope it will go on for a while. 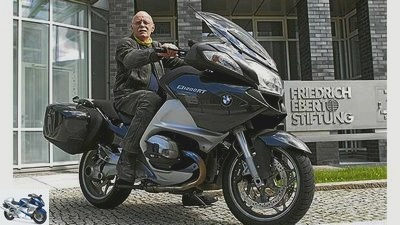 Unwinds a lot of kilometers on the BMW: After family, motorcycling is the most important thing for the lawyer.

Since 2010 Struck has been honorary chairman of the SPD-affiliated Friedrich Ebert Foundation with 620 employees. The foundation is dedicated to promoting democracy at home and abroad, is primarily active in North Africa and South America, but also in Asia, e.g. in Afghanistan. A main focus is currently on Libya, where the foundation wants to help build democratic parties and trade unions in the post-Gaddafi period. Peter Struck is married and has three children.