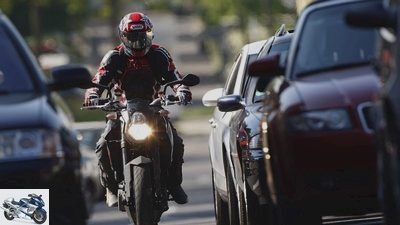 Driving through traffic jams by motorcycle
Petition restarted in August 2020

It is forbidden to meander through the traffic jam on a motorcycle. The Bundestag decided in 2016 by rejecting a corresponding petition.

At least being allowed to drive past the metal columns in a traffic jam when the autobahn comes to a standstill instead of having to stand in the middle and stew – so much freedom of movement should be feasible. Initiator Dieter Balboa from Offenbach spoke to many motorcyclists from the hearts of many motorcyclists with this key demand in his petition, which was started in spring 2015. Exactly 135,248 gave their approval online. MOTORRAD had also called for votes several times. In September 2015, people’s request was received by the Federal Ministry of Transport. In 2016 the Bundestag decided on it – and rejected it.

In the justification for this, the Petitions Committee of the Bundestag states that the same request had already been rejected by a majority of the federal states in 2009. In addition, in a traffic jam it is always up to the police to decide who is allowed to escape from a traffic jam on the hard shoulder in extreme cases, for example in the case of enormous summer heat.

In the event of danger to life and limb (e.g. due to impending heat collapse), motorcyclists could also stand up “justifying emergency” called to get to safety. In other cases, however, the petitions committee of the Bundestag holds it against motorcyclists “for indicated (in a traffic jam, Red.) to switch off the engine and to keep the motorcycle with the stand in the state”, is the final rationale.

In 2019, Jannis Friedrich tried, who submitted a petition to the German Bundestag on this subject. the Petition 91425 is currently (28.8.2020) still being examined.

Meanwhile, on August 15, 2020, it started Bjorn Greis submitted another petition on the subject “Legalization of traffic jams for motorcycles” starts. The wording of the petition:

“Legalization of traffic jams for motorcycles

The German Bundestag should decide that slow driving through traffic jams on German autobahns is legalized for motorcyclists.

According to the Road Traffic Regulations (StVO), motorcycles are also obliged to stand still in traffic jams on German roads. According to the current legal situation, driving on the emergency lane, snaking between interrupted columns of vehicles and using the hard shoulder is prohibited. Like a motorist, the two-wheeler is obliged to remain ready to drive on the motorcycle; Parking the motorcycle on the road is not permitted.

Waiting for hours in hot or cold conditions makes the motorcyclist tired and creates considerable dangers. In order to ensure that the helmet is ready to drive, the helmet must not be removed; opening protective clothing in slow-moving traffic (so-called stop-and-go) also reduces the protection of the motorcyclist. In addition, in comparison to motor vehicle drivers in closed vehicle cabs, the motorcyclist is excessively burdened by vehicle exhaust gases, which can lead to fatigue and dizziness.”

Would you welcome a new traffic jam regulation??