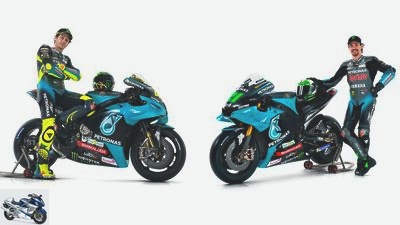 March team boss Razlan Razali presented the MotoGP team with Valentino Rossi (42 years) and Franco Morbidelli (26 years). A high-ranking occupation. Franco Morbidelli was runner-up in the 2020 season. In 2021 he will drive a Yamaha YZR-M1 with specification A Plus. Valentino Rossi finished the 2020 season in fifteenth place, but can make up for that with nine world championship titles, a lot of experience and still great potential. Rossi’s popularity certainly plays a role, but there’s nothing wrong with that. And: Despite the customer team, Il Dottore starts with a factory machine from Yamaha.

It is still an extraordinary constellation, because Valentino Rossi is the mentor and friend of Franco Morbidelli. But there have been drivers before, especially in motorsport, who were able to balance friendship and competition.

And the Yamaha customer team is not to be underestimated. In 2019, the Sepang Racing Team made the leap into the premier class of the motorcycle world championship and took fourth place in the team; in 2020 it was already second. In the 2019 and 2020 season, SRT achieved a total of six wins, 15 podium places, twelve pole positions and one runner-up world champion.

With this line-up, it is even possible that the Sepang Racing Team will get more attention in the MotoGP season in 2021 than the Yamaha works team: Franco Morbidelli is also good for the podium with the customer Yamaha. What Rossi will achieve with the factory machine remains to be seen. But if the material and the mood are right for him, we should continue to count on him.