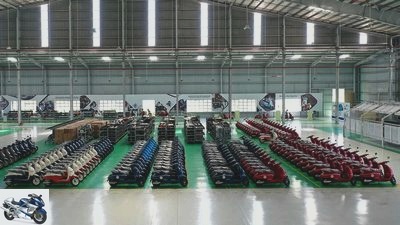 After the takeover by Mahindra, Peugeot Motorcycles is now expanding into the Asian market. From December 2020, Peugeot Motocycles will also be producing in Vietnam together with its partner Truong Hai Auto Corporation (THACO).

THACO is one of the leading automobile manufacturers in the country, has 18,000 employees and has been selling Peugeot vehicles since 2013.

As part of the cooperation, the company has invested in a production line for motorized two-wheelers in the central coastal region of South Vietnam. From December 2020, THACO will start production and distribution first in Vietnam before exporting to other Southeast Asian countries. Vietnam follows China as an already existing economic and production location and enables Peugeot Motocycles to expand its influence in the Southeast Asian market. The first model to be produced in Vietnam is the Peugeot Django.