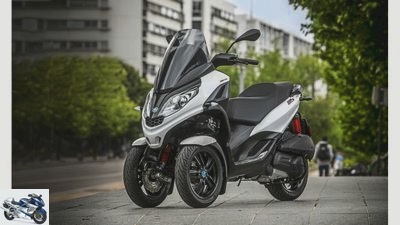 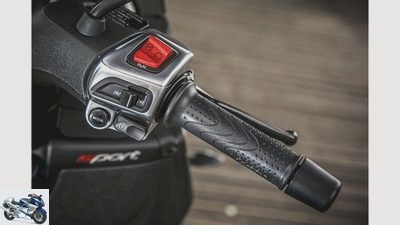 2/4
The switch in the middle activates the lock for both front wheels. 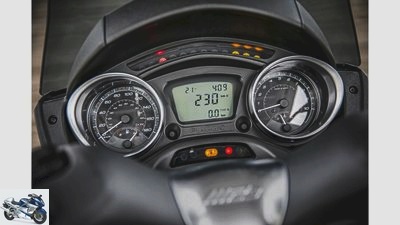 3/4
The instrumentation is functional and clear. But nothing more. 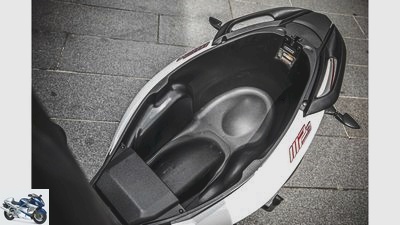 4/4
Under the bench there is space for one to two helmets, or for small purchases.

After revising the large MP3 models last fall, Piaggio is now putting the new 300 entry-level MP3 on the wheels.

The presentation in Paris was no accident. On the one hand, the tricycles enjoy bestseller status here – even before Italy! – On the other hand, the metropolis offers ideal test conditions for everyday commuters.

As characteristic as the two front wheels may be for the MP3, they are quickly forgotten when driving. At least after a few hundred meters. Even then, they convey a lot of trust and also allow acceptable inclines. The successful basic concept was therefore not shaken. The MP3 format, which has been successful since 2006, is still aimed at commuters with a B license, commonly known as a car driver’s license, who want to enjoy the benefits of a scooter in a relatively uncomplicated way. There seems to be a lot of this in Paris too, because here the tricycles share the few square meters of street corners and bike racks with their conventional scooter colleagues.

It seems plausible that the Italians still call Paris the most important market before Milan. As the successor to the “Yourban” the MP3 300 hpe is intended to appeal to younger target groups primarily through its refreshed design. The 300 euro more expensive sports version also has optical delicacies such as aluminum-look treads or red seams on the redesigned seat. There are no technical differences apart from wave brake discs and the MIA connectivity system, which is otherwise subject to a surcharge. The single cylinder, which has been boosted to 26 hp, blends in inconspicuously with the overall concept with and without the sport logo. After all, the”small” MP3 is said to be a good 50 or 30 kg lighter than its bigger brothers.

It masters traffic light starts or brisk overtaking maneuvers confidently, but not really sportily. But the scooter convinces with practical details such as foldable passenger pegs, cockpit compartment with USB charging socket, good wind protection or the integrated helmet compartment. The variator harmonizes well with the engine, and together with the ABS-assisted brakes, it enables the MP3 to participate in the motorized madness of a big city. Last but not least, it is the elaborate construction of the front suspension that allows the MP3 to be moved almost foolproof.

In addition to greater driving safety, regardless of the friction coefficient of the ground, there is another bonus for those who wear expensive footwear: thanks to a thumb-operated lock, the MP3 stays upright even at the traffic lights without having to take one foot off the step. When you accelerate, this releases automatically and allows you to turn in again. With the lock activated and the parking brake in the middle, the tricycle can also be parked without a side stand. On almost every street corner. But the 300 also masters the other extreme of urban mobility. It is true that the handling becomes a little more restless at country road speeds, but you don’t lose confidence even at the top speed of around 120 things. Rather, that of Piaggio advertised touring comfort noticeable.

The manufacturer also offers a wide range of accessories for the tough, often wet and cold commuter reality. In addition to a higher pane, for example, a heated bench and handles, hand guards or the leg covers, which are also widespread in southern European metropolises. Equipped in this way, the MP3 is sure to remain a best seller. But it is doubtful whether the average age of MP3 pilots will change. On the other hand, in addition to a changing attitude towards the combustion engine, the not-so-cheap entry-level price of over 7,000 euros speaks against it.