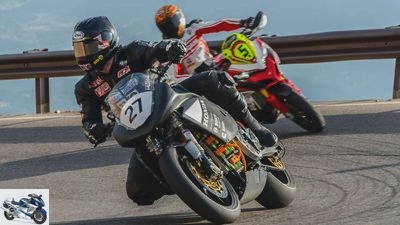 No more motorcycles at Pikes Peak 2020
Consequences of fatal accidents

After the fatal accident of Ducati driver Carlin Dunne at the 2019 Pikes Peak hill climb, the organizers had discussed the abolition of motorcycle classes.

It is now clear: no motorcycles will start in 2020.

Ducati driver Carlin Dunne was on record course at the 2019 Pikes Peak hill climb when he crashed on extreme bumps in his Ducati V4 Streetfighter prototype shortly before the finish and succumbed to his injuries shortly afterwards. The horror after the tragic accident was great. Dunne was the third motorcyclist to die on the track since 2014. After the accident, a discussion broke out among the organizers about the continuation of the motorcycle classes at the Pikes Peak Hillclimb.

As the local newspaper Colorado Gazette reported, race director Megan Leatham had already openly considered an end to the two-wheeler classes in an email. Jack Glavan, responsible for the track, had also indicated that it was in his power to cancel individual classes or the entire race for safety reasons. However, there has not yet been a final decision; they want to wait for further investigations into the accident.

On July 26, 2019, the organizers made a final decision: All motorcycle classes have now been suspended for the 2020 edition of the Pikes Peak mountain race. Whether the two-wheelers will be allowed to compete again in the following years is still being discussed.

Carlin Dunne’s mother, Romie Gallardo, made an official statement a few days after the fatal accident, however, in favor of continuing the motorcycle races. Your son would have wanted it that way.

Super athletes excluded from the regulations

Years ago, the organizers adjusted the regulations for motorcycles so that super sports motorcycles are no longer permitted. The fear of an incalculable performance competition on the mountain when genuine superbikes would compete was too great. In the meantime, however, various manufacturers have super-naked bikes in their range that are not affected by this supersport rule, but almost reach their performance level. For the Ducati V4 Streetfighter from Carlin Dunne, well over 200 hp were speculated.