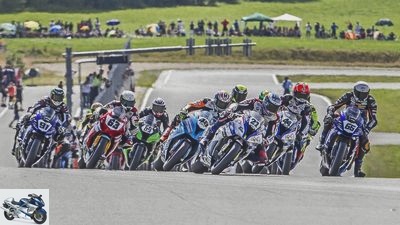 The International German Motorcycle Championship (IDM) is now relying on Pirelli as the official tire supplier for all solo racing classes with championship titles.

With the start of the IDM season 2018 Pirelli to the exclusive tire supplier for all participants in the Superbike 1000, Supersport 600 and 300 as well as Superstock 600 racing classes. These classes – with the exception of the Superstock 600 – are all also driven at the Superbike World Championship. A corresponding agreement for 2018 and 2019 was reached today between the organizer of the racing series, Motor Presse, and the tire manufacturer Pirelli. The highest German motorcycle racing series is thus following the example of events such as the Superbike World Cup (WorldSBK) or the British Superbike Championship (BSB), which have relied on Pirelli as a standard supplier for several years. As with these racing series, the drivers in the IDM are familiar with the tire types Diablo Superbike (in the Superbike 1000 class) and Diablo Supercorsa (in all other classes) start.

Experience from these racing series has shown that with the introduction of a uniform tire regulation, the power density increases across the entire field and the overall attractiveness of the sport increases. “This is a great advantage, especially for the fans, but also indirectly for the drivers and the teams, since more popularity with the series is of course noticeable in the increasing interest of the sponsors”, explains Matthias Schroter, head of the Motor Presse action team, which acts as the promoter of the IDM. “The new agreement is a central component for the targeted further development of our racing series. An important point here is that the Pirelli concept also attaches great importance to promoting talent.”

Pirelli with a funding concept

As a new partner of the series, Pirelli has developed a broad-based support concept for the IDM in close coordination with those responsible for IDM, which explicitly also includes the 600 and 300 junior classes. The basis of the concept is that Pirelli actively supports the top drivers in all racing classes in advancing to the next higher category of the IDM. There is also an option for the World Championship: “Thanks to our many years of activity as a tire supplier for the Superbike World Championship, we have very good contacts with the organizers and teams of this racing series”, adds Michael Muller. “We want to use these connections so that suitable IDM drivers can present themselves on the international stage at an early stage and gain important experience in the process. As we are convinced of the potential of our national pilots, we have budgeted a medium five-digit sum for the Pirelli junior program.” In addition to funding through guest starts in the Superbike World Championship, Pirelli also plans to support qualified drivers in advancing into the field of World Championship pilots. Like all other modules of the funding concept, this support also applies in principle to every displacement class in the IDM.