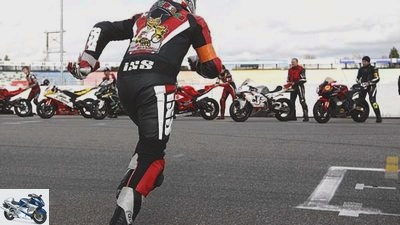 The moment of truth: After various training sessions and tests, PS rookie Uwe Seitz drove his first race in the 1000 kilometers. Confident he left for Hockenheim. But then everything turned out differently.

“If you are nice, you drive 2:08.” PS photographer Markus Jahn couldn’t have summed up my appearance at the 1000 kilometers from Hockenheim more accurately. Disenchantment followed the nice feeling in the Parc Ferme of finally having driven the first race. 2:08 min as the best lap in a sprint race feels like a low blow. The euphoria gives way to disappointment. My teammate Mike Nagele clearly showed what was inside. He drove a 1:58 lap. 10 seconds! O tempora, o rookie! Reasons? They are as numerous as they are instructive at the same time. “You can actually put a trained monkey on it,” ex-GP racer Jurgen Fuchs once told me about racing. Only now do I know how he meant it.

But the whole thing had a significant foreplay. The company “Racer” started with cold feet on Good Friday – in every respect. Temperatures just above freezing point, heavy rain showers and finally snow in the afternoon were of course not ideal conditions for the racer baptism. Sticky Conti Race Attack, it was clear, was eliminated as a tire for our Honda CBR 600 RR already off. Conventional road tires were needed. And with that began the brooding. I’ve never been on the road in such conditions. Should I really accelerate with that? Just don’t fall, just arrive and not end up last – that was our goal. Was that even possible now? Mike was cleared up, I couldn’t have asked for a better team partner. But every rumor of the cancellation of the whole event crept into my consciousness like good news. Then I would be rid of all worries. I last had this feeling before doing maths, when I got a sore throat.

The document and vehicle acceptance procedure went smoothly, and the CBR finally disappeared in the Parc Ferme. A warm window seat and the intake of isotonic cold drinks calmed the nerves and shortened the wait for the big drivers’ meeting in the evening. The organizers were determined not to do me a favor. Demolition, it was said, was the last resort. First of all, they want to start the endurance test later, shorten the distance and move the sprint races to the slightly warmer afternoon hours. So now there was no turning back. At most the Greek we had dinner with could save me. But the Athens record was flawless – the world is cruel.

The principle of a trained monkey 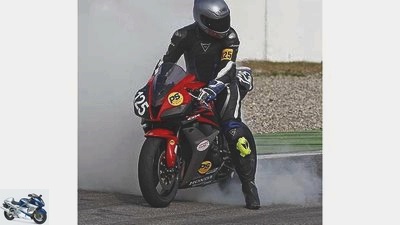 Final driver Mike Nagele in the well-deserved burnout in the Sachskurve.

Being a racing driver on the 1000 kilometers starts early. The endurance test starts normally at 8 a.m. The weather was even a little cleared. The track was still very wet, the temperatures only a few degrees above zero, but the very thick clouds of the previous day had gone against all forecasts and my most secret wishes.

The start was postponed by an hour, and when the starting drivers were already on the track, the race management decided to shorten the distance to 40 laps. Forty laps in four hours? Six minutes for each of the approximately 4.5 kilometers long laps? That actually sounded reassuring. Our original strategy of coming into the pits after 26 laps with an empty tank, changing drivers and fitting new tires after three stops was of course now wasted. Nevertheless, our team decided with Axel, Fritz and Martina that Mike would do his 26 laps, I would drive the remaining 14 laps and then maybe do a few extra laps. “All right, it dries up, watch out, just a few damp spots,” Mike pats me on the shoulder and off we go. The traffic is considerably larger than during the race training, the racers come flying in from all sides. I carefully inspect the course, finally I give more gas and do 2:10 laps, which feel very pleasant. Every now and then I even overtake. Then suddenly the falling aria begins. First one of them throws away his 1000s right in front of me in the hairpin, two more should follow in the following laps. At the entrance to the Parabolika there is soon the next one, in front of the Mercedes grandstand white scratch marks indicate a fresh fall. They keep falling happily. Despite the low temperatures, the dried-out route seems to be loosening the gas hand for many. When we stop in the pits after completing 16 laps, we decide not to risk any more and to park the motorcycle in the Parc Ferme.

“I’d really like to start the Le Mans start,” I hear myself say. The easy rounds of the endurance test blew away my nervousness and made the upcoming long break courageous. Then the time has come: two warm-up laps, then it’s on to the starting grid. The pulse is now pounding violently, the tension has reached the boiling point. There is absolute calm, the calm before the storm. After the 10-second sign, the starter waves the flag. The trampling of boots breaks the silence. I jump on the CBR, the clutch already pulled. Press the start button, the Honda starts immediately. There was a roar everywhere, from left and right the motorcycles were shooting towards the first corner. And now I am making the biggest mistake that a real racer never makes: I do well behind the scenes. Others, with a knife between their teeth, fearlessly stick to the inside, push their way through, forcing those behind to brake. I am one of the slowed down and from now on I am busy keeping up with it. Then I make the second big mistake: I hang on to slower drivers instead of concentrating on my line. Too often I have to brake until I feel safe enough to pass. Then I make the third big mistake: I just give it a restrained accelerator, I’m stupid with excitement, I lock myself up, brake much too early, roll too slowly through the corners and let myself be intimidated by others who push past me. As soon as my tension is released and I pick up my speed, I see the pit board – the change is imminent. The fact that I almost drop the motorcycle in the process tops it all off. Mike roars away and makes up places. I’m just happy that it’s over, I’m standing by the pit wall and shivering like a leaf – the excitement, the adrenaline, the euphoria. In the end, we are 15th out of 30 super athletes who started. We warmly congratulate each other. Only when I see the times do I realize how wrong everything was going. The feeling of happiness turns into real disappointment.

In return, I learned why a trained monkey would be a good racer: He doesn’t think, stops, calls up his learned program and doesn’t hesitate for long. I know what to do: turn evolution around. Therefore, the first race was not the last: The rookie will not be discouraged, the next race is planned – to be continued. 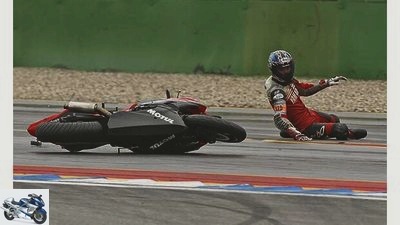 There were tons of falls in the weather, but no one was seriously injured.

This year will certainly be the toughest 1000 kilometers of all time. Nothing for warm showerers. ”With these words, the chief driver Torsten Witter closed the drivers’ meeting on Friday evening. For the first time in years, the starting field of the 1000 kilometers was not full; Wet and cold had caused cancellations in advance. Drifting snow on Friday brought the event close to being demolished.

A number of drivers with falls also paid tribute to the weather. Although the conditions were surprisingly low at the beginning of the endurance test, when the track dried out, some of them overestimated the grip on the very cold surface. Fortunately, everything went off without any serious injuries.

The decision of those responsible to shorten the endurance test was undoubtedly driver-friendly. The reason why only 40 laps were scheduled in four hours gave rise to rumors: BMW pushed for it because their top drivers weren’t particularly motivated to drive an endurance test in the weather. In general, BMW was the topic of conversation: With the Motobike team, the Bavarians not only offered the most prominent drivers, namely last year’s winners Markus Barth and Jurgen Fuchs, but also provided a large exhibition of all BMW models and an armada of new HP2 Sport on the course a performance at IDM level.

From a sporting point of view, the massive appearance of the works teams was also hotly debated, especially by traditional series athletes and hobby drivers, the actual clientele of the event. Ultimately, the interest focused on class 4, there on the duel between BMW and KTM, which had also brought some teams to the start with their new RC8. The fact that the duel turned out to be rather poor was due to the fall of the Finn Pauli Pekkanen (concussion). He was partner of Stefan Nebel; their RC8 thus missed the jump into the sprint race. BMW won, although they had actually received a time penalty due to an error in the endurance test (too late in the Parc Ferme). The pressure from Bayern was obviously too great for the ADAC, and the minute penalty was lifted. Otherwise Buell Hannover would have won the race. Is that the future of the event?