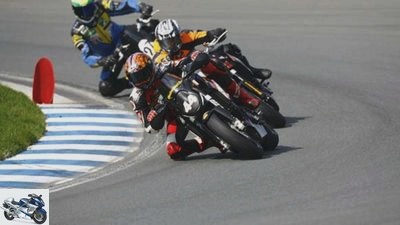 The horsepower rookie is back. After a rather cautious start to his racing career in Hockenheim, this time he was allowed to start in a hobby series. The first race weekend of the KTM Super Duke Battle 2008 provided the perfect backdrop.

Woah – pain! No matter how handy the Duke can be. In a racing squat at real speed, the forearms have a lot to hold on to such high, wide handlebars and bare motorcycle. After the horsepower rookie mission, there is definitely a huge drag between wrist and elbow, left and right! The feeling is still great. Somehow superbiking must have been in Eddie Lawson’s time.

Compared to the super sports car on my maiden racer voyage, the 1000 kilometers from Hockenheim, this is a completely different way of racing. And that’s exactly what it’s all about here in Oschersleben: 1000 Mountains Trophy, prelude to KTM Super Duke Battle 2008, the first of eight battles this season. 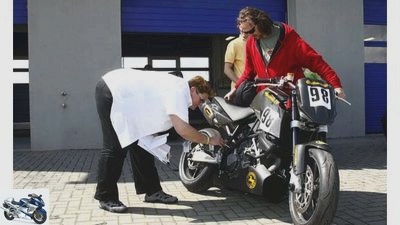 Technical acceptance: a sensible must at the beginning.

Besides me, 38 other riders came to find the fastest and have fun together at motorcycle racing. Full field of drivers! The start lights go out, and the mighty number of 990 twins sends a mighty roar across the Magdeburg Borde on Sundays.

But such a racing weekend starts earlier. The registration procedure precedes every racing event such as the technical inspection of the motorcycle and the helmet. After that, there is still time until the free practice on this Saturday afternoon to find a place in the pits and prepare the motorcycle. As a guest starter, I am warmly welcomed by the field of drivers. Some of them know each other from last year – such a cup is obviously addictive – or from race training. The new station wagons from the driver’s package are tried on, branding is commented on and people talk shop in a relaxed atmosphere.

The horsepower rookie at the KTM battle in Oschersleben 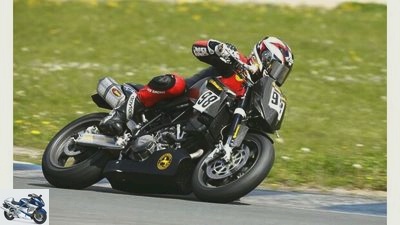 Such a hobby cup is very colorful. One belongs to the quiet, the other has an incredible need to communicate, there are weird types, strange boys, highly concentrated ambitious people, a fast woman, title favorites, the quick and the less quick, newbies and the entourage, consisting of women, friends, children and that one or the other dog.

At 5 p.m. it is over with the colorful all sorts. The twins roar, the visors fold down, the pack is hungry for action. “Super Duke Battle for the pit lane exit”, calls the course announcer. From now on it goes in one direction for everyone. Most of the people in the field have been here before, I’ve never been here. On the other hand, I’ve heard a lot about the motorsport arena: “great motorcycle route”, “technically demanding passages”, “fast corners”, “Mutecken”. 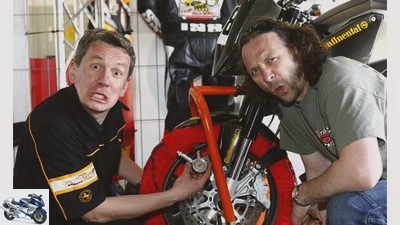 Trust is good, control is better: who pumped two and a half bars into the Race Attack??

The motorcycle goes great, maybe a little bit of gas play, but otherwise it fits quite well. I depend on my colleague Gluck, who will contest the entire battle with his KTM and who will show me the line here. The Hasseroder curve is a beautifully smooth and exaggerated 180 degree left. Then it comes down to the triple links, which can be driven fairly quickly in as large an arc as possible, almost in one piece; Experience and courage pay off here. There is hardly any time or space to brake on the rather slow hotel curve, a right one. With the right gear and neatly accelerated out, the chicane flies up, which most take almost dead straight by racing over the curbs. The Duke willingly goes along with the stumbling block and then turns with a lot of pull to the right onto the back straight. For the upcoming right-left combination, it is important to get a good grip on the braking and turning point. Again open the gas, short straight, fast right, and then right again, albeit considerably more slowly, to start / finish.

Then I feel it for the first time, after five laps: My forearms feel mega-thick and pull hard. I am very happy when the checkered flag waves the training off. Michael Roth, Cup PR man and racer on sick leave, helps me adjust the fittings, somehow I have to relieve my arms. We are also correcting the play on the throttle cable. Then come the training times: 1: 48.4 min is not great, but under these circumstances it is a start.

The horsepower rookie at the KTM battle in Oschersleben 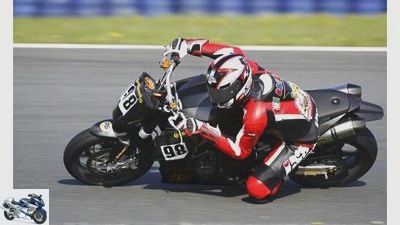 Things get serious on Sunday morning: first qualifying. “You have to crack one forty-five”, It was said from the editorial team, and the PS Capo Schroter who was present confirmed this demand. Always this pressure! The arms hurt again, but the fun of driving, hanging on to the faster guys and the better arranged brake and clutch levers make you forget that. The result is 1: 46.1, still not a feat, but a clear improvement. In the second timed practice before lunch, things go even better: 1:45.3 – I’m getting closer to the target. Once again, PS-Schroter confirms his expectations for the first race and will be available as an umbrella girl in the second run if I break the 45 mark.

Then the time has come. After the introductory lap, I’m in position 31 on the grid. The starting flag is waving, the traffic light is red, the engines are roaring, the red light is on
comes from. Full bottle! The KTM lifts its front wheel briefly, then pushes it powerfully forward. I can overtake a few and overtake me. Even more Super Dukes pass when I take the gas off much too early before the crowd in the first left turn. Damn!

But I get through the next right and can overtake some of my opponents on the Hasseroder. It’s going great, I’m in a group that has good speed. Then we overtake a racer. The others take the inside lane in the S-curve, and I only have room on the outside: I hadn’t expected the right-hand swing of the person being overtaken, I have to swerve, and then I bump into the grass over the outside curb. From now on I am busy trying to reconnect with the group in front of me. Sometimes I get closer, sometimes I make a mistake, go too far in corners or take the wrong gear. When it’s my turn, the checkered flag comes – all of a sudden 17 laps plus two minutes are over. 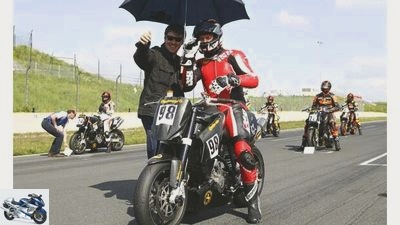 Promise kept: PS boss Schroter as an umbrella holder for the rookie.

What a great feeling. If I had known that earlier – when I was 18 or 20 years old. You always set yourself new goals in the race: The people in front motivate you, overtaking is a small triumph every time. It doesn’t matter that the top of the field drives 9 seconds faster and laps you on the penultimate lap. In a cup like the Super Duke Battle you can always find some with which you can deliver a real race. Small battles – sometimes win, sometimes lose.

Afterwards in the box everyone around me jump from the machines in euphoria, everyone is still telling his heroic epic under power. Henne from the top group listens to me as much as I listen to Rebler and Huby’s adventures of duels and braking attacks. At that moment we are all racers, we have fought our battle. The ones at the front have our great respect for their incredible speed, as well as those at the back because they dared to do it. You will get better and so will we. The rookie time: 1: 44.6 min. The boss as a grid girl – what fun, such a hobby cup.