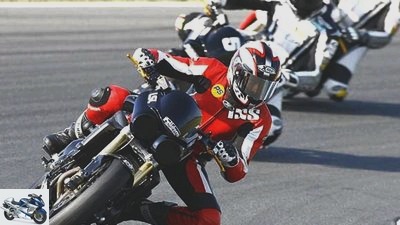 This was not only asked by the Stuttgart hip-hoppers from the Fantastischen Vier “Rock the Race” in Oschersleben. The horsepower rookie also came from Benz-Town to the Magdeburg Borde to find out what the racing novice is now doing at the races of the Triumph Street Triple Cup: a whole lot, he advanced in unimagined dimensions.

I recently watched the film “The Doctor, the Tornado and the Kentucky Kid” again, a gripping documentary about the first MotoGP race in Laguna Seca. Totally fascinating to listen to Colin Edwards, Valentino Rossi and Nicky Hayden, what goes through their heads round after round, how they look at their opponents, change their tactics, hope, fight, win – or fail.

“Unbelievable – a different world”, I used to think when I saw the strip. “Wacky, never understandable” was my regular summary at the end of the credits. That didn’t change when the rookie stories themselves washed me into the racing scene. I was far too busy with myself there, with the motorcycle, the line, everything around it and above all my nerves. Race tactics, spy out, react? Pah, how then! But if the rookie ever wants to become a racer, this point in particular has to change. I got another chance.

With the guest start at Triumph Street Triple Cup, after the unfortunate 1000 kilometers from Hockenheim and the first ray of light, the KTM Super Duke Battle, I’m going to my third racing event. Lo and behold, with a little experience you get a feeling for the essentials. I do the first free practice session with the bare 675 triplet and am immediately in a good mood: The motorcycle drives great, literally plays the route into your hands, the engine is easy going, the Bridgestone 003s stick. 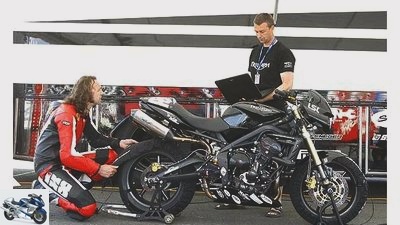 Cup boss Frank Hoffmann takes care of everything and drives the horsepower rookie.

While the first bands open the festival for the handpicked teen audience this Friday afternoon, I treat myself to a cold beer in the G-Lab truck as a reward for my starting place. Admittedly, the time wasn’t nearly as fast as that of Tode and Hafeneger, who usually sit here, but you don’t have to say bad about the emerging racer feeling. Even Frank Hoffmann, cup boss, G-Lab member and passionate engraver, strikes astonishingly mild tones.

However, if I give unasked comments on the driving behavior of the triple or proud descriptions of my racing maneuvers, Mr. Hoffmann steps on the rookie brakes: “Just give it a boost.” In return, he buys the next beer,
G-Lab Hangaround and triple pilot No. 13 Guido Muller adds the ubiquitous Jagermeister festival shooters. Do you already fear the rookie? Should it be made harmless with alcohol? I’m not particularly keen on learning during my rookie training how professional racers feel on the grid after a night of partying.

So my festival evening ends here; Nevertheless, I didn’t manage to get a better time in the second qualifying the following morning. One of them actually still makes it into the top 10 and pushes me to starting position 11. It doesn’t matter, now it’s time to enjoy Fanta4, take a look at Herbert and go to bed early. Because at 8:40 a.m. on Sunday morning there is a race. As soon as the tire warmers are on, the nervousness rises – nothing can be done, and I think Colin, Vale and Nicky are now feeling something similar. The introductory lap feels weird, comes to an end far too quickly, and suddenly the red light goes out. Then a dejà vu follows: the start was messed up, a number of places lost, frustration and self-doubt – “Uwe, you never learn, you will always be a rookie!” But already in the first corner I regain positions, and new ones that I never thought of Thoughts conquer my cerebrum: No longer “the main thing is to stay seated”, “It’s just fun!” Or “This is not about anything”, but “Speed ​​it up”, “Grab it” and “Fight!” Is the hammer under my helmet.

After the start I dropped to 17th place, six laps later I’m fighting for 10th place. Yes, I’m fighting! And meet number 11, Dominik Vogel. While I am considering whether I might be able to go further, Dominik unfortunately does not give up and constantly brakes past me at the end of the back straight or after the start / finish. No matter where I overtake him – Hasseroder, Hotelkurve or in the S, the 11 stays on and takes advantage of my too lazy braking. Suddenly I hear Colin, Vale and Nicky: “You have to change the way you drive!” I try to brake later, not to give up an inch from the battle line. In the penultimate right I firmly oppose it, Dominik has to close the gas. I can feel his motorcycle on my leg, but stay ahead. Soon the sweat drips from my nose, I run out of air – “When will it finally be over?” Unfortunately later than hoped: At the beginning of the last lap, Dominik shoots past me, I just don’t have the strength to counter it. And at the end of the back straight, Thomas Tack slips through – damn it, where did he come from? 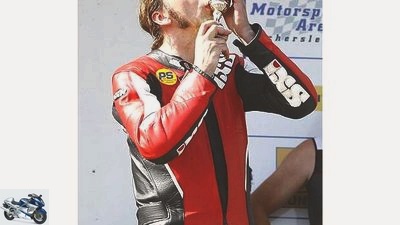 First trophy in a young career.

The last two curves remain; what would Vale do? I brake as late as possible. Too late. Gone, the two cross the finish line just in front of me. I’m annoyed about this 12th place, as if I had just lost the World Cup. Just a few weeks ago, I would have been just happy to have competed in a race at all. Where does this ambition come from now??

This already subsides in the run-out round. The fun factor, the joy of such an exciting race and the camaraderie in the Parc Ferme are too high. Thomas, Dominik and I have an exuberant discussion of the last few laps. And it’s actually true: The rookie gets his first trophy, a glamorous award ceremony in front of sparsely occupied stands and respectful pat on the back from really fast T-Cup racers like Frank Spenner, Hajo Ammermann and the subscription winner Christoph Helmich. The bang comes with the lap times: With my 1: 40.5 I could have landed even further ahead. “You just don’t have the killer instinct,” taunts photographer Dave this time.

The second race is completely different. I don’t want to have the butter removed from my bread right at the start and I don’t brake at all at first. Seventh, I’m seventh! But when braking into the first corner, I realize how optimistic the “killer instinct” has made me: the front wheel is for a moment, I plow straight ahead, have to swerve into the car chicane and line up as
Last far behind the field again. From now on I fight my way forward, I’m back in 12th place at halftime, attack Dennis Kabburg, pass by and be overtaken by him again. Like Dominik and I in race 1, we’re going to play a match. No matter what I try, Dennis cleverly closes the door, barely showing any nakedness and
holds against it. No matter what the Texas Tornado and the Doctor whisper to me, I can’t make it – the 9 crosses the finish line before me. The frustration is limited, somehow I took a huge step this weekend. MotoGP heroes speak to me because all of a sudden I am racing like I never would have thought before. The speed, the action, the fights – wow, Doctor, that’s cool!

What else was there 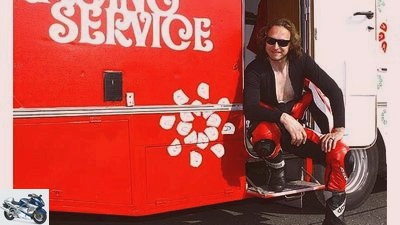 Like in Barry Sheene’s time: Nolan truck and rookie hairstyle.

Rock the Race – actually a cool idea: a couple of well-known music acts, a colorful selection of motorsport, a race track where nobody feels disturbed, and an action-packed weekend is ready. The cross-fertilization did not quite work, because on the first day motorsport only attracted a few visitors to Oschersleben, and the large number of students invited were hardly interested in the sport, apart from the teen bands. It wasn’t the weather, the sun was burning.

On Saturday, however, it looked different. Even before the new one “Superstar” Thomas Godoj presented his rather pale talent to a screaming girlie crowd, found considerably more spectators in the stands to marvel at carts, cars, teams and the Triumph bikes during training and competition. But what it was mostly about became clear when 2Raumwohnung, Fanta 4 and finally Herbert Gronemeyer came on stage in the paddock: more rock than race. With a few exceptions, Sunday belonged to the motorsport drivers again. Nevertheless, the idea of ​​the first Rock the Race alone deserves respect, and after all, once is not once.

A lot of thinking makes you slow 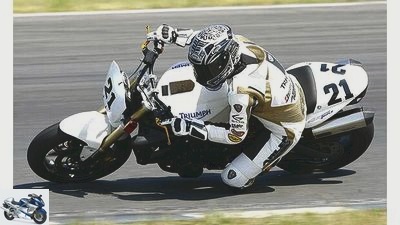 By the way: Inka Jaeschke was the only lady in the field with her Triumph in 9th place.

Oschersleben. Finally Oschersleben again. If Wimbledon is Boris Becker’s living room, Oschersleben is my party room and my kitchen in one: you won’t find me more often on any other racetrack. It was here that I celebrated my greatest successes, and nowhere else did I lie in the gravel so often. This is where I feed myself, this is where I gather energy for the everyday madness of life. Here I am person, here I can be. How did I cry with joy when I was at
Speedweek 2006 rolled over the finish line, but what did I throw up when I sank my first victory that was within reach in the gravel.

For me, Oschersleben is life – only much more compressed than out there in the “normal” world. War and peace, victory and defeat, birth and death, all within a 3.7 kilometer long orbit. Crazy. Two runs for the Street Triple Cup were on the program. In order to win the thing, a win would be almost a must. To be honest, I already knew when I arrived that it would not work; too many thoughts rushed around in me. If you think too much, you are not fast. Two weeks earlier, I had been permanently cleared away in the Bordesprint. In addition to a real exploded K5, I was still safe, once again. I was grateful, but wondered how often the monitor says “Rider ok”? I love life far too much for it to end now.

Far too much I want to see my two daughters grow up, how they challenge me, sometimes annoy me terribly, but sometimes just hug me. That’s the greatest, really. I’m addicted to it, almost as addicted to racing as I am. The latter can change everything very quickly. That happened recently in Most: two people were in the wrong place at the wrong time. Something like that makes you think, and that’s a good thing. Everyone should always be careful to understand life for what it is: the greatest gift we could be given. Enjoy it out there on the PS notebooks, always make it clear to you, even if the day is shitty again. Oh yes, I only finished third twice, but that’s not bad. Actually, I even like to be third. It’s kind of more human, isn’t it?