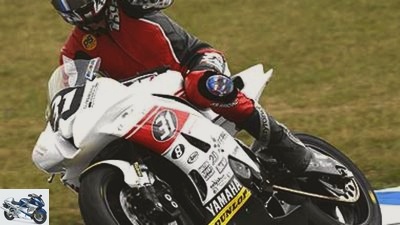 The R6-Cup is considered to be a cadre forge; GP drivers, world champions and IDM greats come from him. The next experiment for the PS rookie took place in this shark tank. He just got away safely.

“Are you crazy??” PS boss Matthias Schroter and cup coordinator Thomas Kohler came up with this beautifully: A guest start at the R6 Cup, that’s something for the rookie. I wasn’t very euphoric. Oh no, I had my pants full, and painted it. To be lapped by half the field in a jiffy, times that are good for the IDM?

In a meditative office phase, I see myself as the black duck Duffy Duck on the R6, while behind me a gigantic, dark cloud of thick smoke, screeching motorbikes, flashing helmets, grim visages and colorful station wagons approaches at a crazy pace. I’m already swallowed up by this crowd, only to spit myself out in a split second as a plucked chicken – all I had left was a tail feather. After all, I said at some point that the daydream phase was probably lost mentally “Yes”. Hardly two weeks later I’m in the Motorsport Arena in Oschersleben. The backdrop is impressive: fat trucks from the Endurance World Championships and IDM, large mobile homes and hospitalities, the paddock full to the last seat. Right in the middle is the Yamaha R6 Cup trailer. Right next to it I park the extremely comfortable motorhome that the Dethleffs company gave me for the weekend. If it’s top league, then with a corresponding appearance! There it is: a perfectly constructed R6. At the sight I feel a pleasant tingling sensation. The engine corresponds exactly to the series, but stubs, fittings, footrests, exhaust and fairing exude uncompromising racing.

There is also an Ohlins chassis, for which Zupin provides an expert who can be accessed by every cup participant. And every motorcycle has extensive 2D data recording that expert Tom Lischitzki evaluates with every rider. In the tightly packed calendar of this year’s Speedweek, the R6 Cup has less driving time. Half an hour of free practice on Friday morning must be enough. It’s enough for me to find out that the Cup-R6 is a damn sharp blade to deal with. Their excellent performance characteristics do not allow any mistakes. Once you hit the wrong gear, the lap is gone. Coupled with the usual rookie inadequacies, the times are not exactly exhilarating. In any case, I’m a long way away from my fabulous 1:39 time, and the next thing is qualifying; it’s about the launch site. 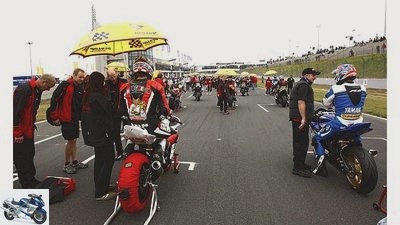 Good mood, despite tough competition. Forty R6s will soon throw themselves into the bend.

In the meantime, the technology crew provides the Yamaha for me one. It’s great to be a factory driver – nice guys with a full perspective! “The gear lever needs to be a little higher. The brake lever on the handlebar should be down a little. Shock absorber? Everything okay. At the end of the start / finish line, I had chattering when I put the brakes on.” Matthias Greif, the landing gear man who was called, suggests a modified fork setup. Then I take a look at my performance with Tom. The good news first: At the apex of the corner I’m doing quite well, in the Hasseroder even in the top 10. But I’m not even close to the level when driving in or accelerating out. The data recording reveals things that I have never thought of before: I lose so much time with every shift that it adds up to a lap. Instead of quickly closing the gas and then opening it again, I close the throttle valves much too slowly and open in lollipop mode. The speeds out of the corners are far too low, almost everywhere I go one gear too high. Not to mention braking. All of this hits me relentlessly, but: A learning process begins.

Suddenly the training degenerates into work. I am constantly watching my movements. Do I turn off the gas fast enough? Do I couple too long? Do I have the right gear? When can I wind up? It’s no longer carefree racing. The chattering is gone for it. During the break, Tom sits with me in my mobile home, where we go over the laps on the computer. Some things have gotten better, but we didn’t have a perfect lap. The 2D program calculates a theoretical best time of almost 1:39 minutes from the individual sections, which makes me confident. A 1: 40.291 was rated – 34th out of 40th. There is still a chance in three hours. But I completely beat up the second timed practice. In addition to the perfect bike treatment, an overview of what is happening on the track and tactics are also part of qualifying – I had none of it: I drive lap after lap behind a slower colleague and try desperately to overtake him at a suitable point instead of simply take the gas out, find a suitably large gap and then put everything into a round or two. Before the end, I am completely exhausted and have to make do with starting position 35. 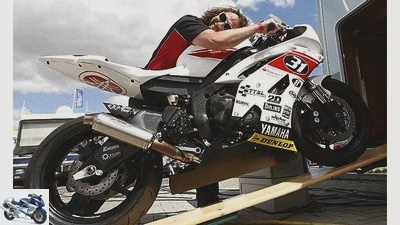 The rookie and the R6 were almost inseparable. There would have been room in the motorhome too, but Yamaha paid attention.

Then it’s Sunday morning, race day. I slept badly, despite the princely housing. Heavy rain woke me up in the middle of the night. I still haven’t competed in a rainy race and I definitely didn’t want to start here. But there is no new rain, and the IDM classes ski the slopes dry in their warm-ups. I get into my station wagon much more nervously than at all previous rookie events. This mixture of tension, a little panic, but also a certain euphoria makes me keep running circles around my motorcycle. “Attention paddock, R6-Cup please at the pre-start.” – No more fun! A little later we are on the starting grid. Then it goes into the warm-up round and onto the starting place. No one left to tell me something reassuring. The traffic lights come on, the four-cylinder howls bloodcurdily. Green. 31 pulls under me like a torpedo. I have enough speed, slip the clutch and fire past some in front of me. I also overtake in the braking zone in front of the first left. I could roar out loud with joy, I had only screwed up here in the other races so far. To the right I sort myself around the 22nd place and hold it up to the triple left. Then the sparks fly. Two people got caught in front of me and fell. But there is no time to think. Drop anchor, evade, take another gear down and open the gas early. At a full incline, as Philipp Hafeneger showed, I circumnavigate the first curb of the McDonalds chicane and crash over the second. Then with a little taste in the right on the back straight and duck deep. Norbert also said that I spread my legs too far on the straight, sitting too far forward. If he could see me now! Rossi doesn’t sit better on his M1.

Nobody grabs me. But the man in front pulls away, and after the penultimate right a blue R6 shoots next to me. The straight torpedoed my targeted line. “Yes,” I yell at myself, “he’ll do it right.” So it goes on. Two still slip through, but I can hang on to it. All doubts are over, I don’t care about the lap times. It’s racing! So far, I’ve hardly made a mistake. Even the corridors were mostly right. Round 5, unchanged picture: I’m still well among the top 30. The Hasseroder fits, the triple links works, the hotel curve can still be improved, but the chicane fits again. When I’m on the right on the back straight, I open the gas. Suddenly I get damn hot. All of a sudden I lose my grip on the rear wheel. The stern breaks out to the left. I’m already looking for a possible impact location, but instinctively turn off the gas and turn the front wheel into the wheel. The stern pulls to the right. It lifts me from the saddle. When I come down and land back in the seat, a group pulls past me. Phew! The Yamaha is rolling straight ahead again, but I’m completely off track mentally. I try to calm myself down briefly. Then I accelerate again to be able to keep up.

But in the S to the left, the back is already smeared again, albeit only slightly. Before that I wouldn’t have worried, but now the oven is off. Without guts, I drive into the corners. My pit crew shows me position 29 and a comfortable lead over the next competitor. But instead of driving concentrated and securing the place, I drive completely inconsistent, especially in the supposed highsider right, I only do crap. Besides, I’m running out of breath. But there are still 5 rounds. When, just before the end, I made a detour into the green on the right before the back straight, the place in the top 30 was gone. I finally don’t have a bite anymore. When the top flew under me, the checkered flag is like a relief. In the run-out lap I look around: there are still some behind me, that calms me down. Immediately the adrenaline shoots me back into positive orbit. With my visor open, I suck the oxygen deep into my lungs. In Parc Ferme, the world is completely fine again. I was allowed to race a great motorcycle, play with really fast guys, had an unforgettable weekend, stayed seated and didn’t finish last. Hurray: Someone out there now owes me a case of beer.