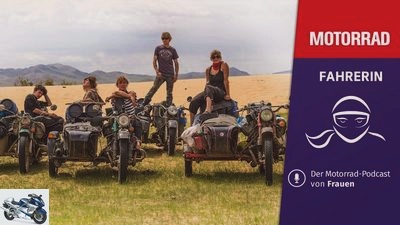 Podcast MOTORCYCLE Rider: With the motorcycle to New York

We spoke to 2 of the 5 adventurers.

Current notice: If you want to see the five circumnavigators in the livestream – on On November 15, 2020 you will be our guests from 5 p.m. “Borderline”. In addition to excerpts from the film, there will also be a moderated talk and you can ask the five questions in the chat.

The five in the podcast:

Five newly minted sculptors, four Ural 650s with sidecars, 2.5 years and 40,000 kilometers – this is not a journey, this is a project. An expedition that began in Halle an der Saale and brought the five artists through Georgia, Kazakhstan, Mongolia, Chukotka, across the Bering Strait, to Alaska and through Canada to New York. All five only got their motorcycle license for this venture. Until then, they had just as little experience with off-road driving as they had with motorcycle screws. Nor had they practiced sewing flesh wounds or replacing dental fillings before the trip. But that changed quickly on the way.

And how do you actually build a huge raft out of five Ural teams, with which you can steer the sixth largest river in Russia down over 1,000 kilometers? Anne, Efy, Elisabeth, Johannes and Kaupo faced the challenge the moment they appeared right in front of them. But then without panic, instead with solidarity and a good dose of pragmatism.

Between autumn 2014 and January 2017 they documented their breakdowns and challenges, encounters and constructions with a single lens reflex and smaller cameras. Back in Germany, together with the director Daniel von Rudiger, they set about making a great film called 972 Breakdowns. 972 breakdowns in other words, with a simple punctured tire quickly not more than “Glitch” was counted.

On the film and cinema tour in August and September 2020, the film inspires many people – regardless of whether they are motorcycle travelers, hotel overnight stays, campers or those who stay at home. The film has been in cinemas nationwide since September 3rd. We were very lucky that two of the five adventurers – Anne and Johannes – stopped by on the film tour in Stuttgart and we were able to record a podcast episode with them. Have fun while listening!

About the podcast series MOTORRAD driver:

The focus is on topics and questions that concern women who ride motorcycles, which motorbikes they ride and what they experience with them. It’s not about demarcation. It’s about getting the riders out there involved. In addition to the usual motorcycle topics, which are just as interesting for women as they are for men, in our experience female pilots talk even more frequently about the maneuverability of mopeds and about seat height and width as well as difficulty or ease of movement of the clutch. And there are countless other motorcycle topics that are worth looking at from the female point of view, reporting and talking about them. Just listen to it and tell us what you think. We look forward to mail podcast@motorradonline.de.