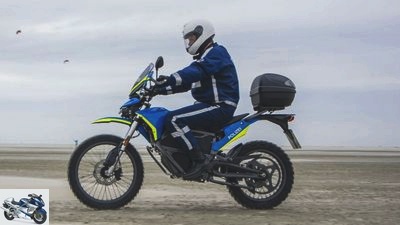 Germany’s first electric police motorcycle has been in use on the East Frisian North Sea island of Borkum since the beginning of May 2017. 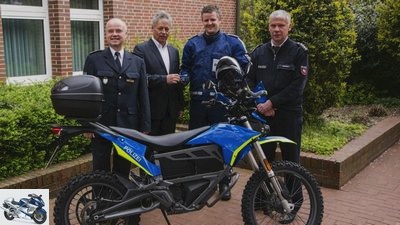 Bernhard Witthaut, police chief of the Osnabruck police department, handed over the electric enduro zero FX 6.5 on the island of Borkum to police director Johannes Lind, the head of the police station Leer / Emden, and commented on this step as follows: “The new emergency vehicle in the police headquarters combines innovation, ecology and practicality and is therefore ideally suited for the island region. Electromobility is an important key to the sustainable transformation of mobility in the police force.”

Both Police President Witthaut and Head of Inspection Lind were delighted to be the first police authority in Germany to implement such an electric vehicle in everyday police operations. In the future, the officials on the island will be able to reach rough terrain better and faster without affecting the special aspects of the island such as nature and environmental protection or tourism.

Witthaut announced that further acquisitions of police e-bikes are quite conceivable. In a two-week test at the beginning of March, the new vehicle made a positive impression on the police on Borkum, added Jorg Heitner, head of the Borkum police station. 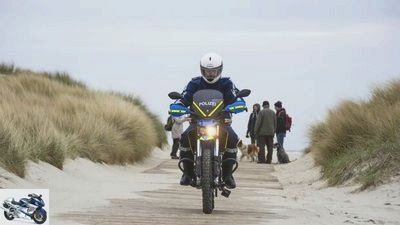 The 31 km² island of Borkum is part of the Lower Saxony Wadden Sea National Park; nature and environmental protection are particularly important.

The purchase of the Police Zero FX 6.5 cost around 13,000 euros; The responsible office estimates the running costs as low, among other things because of the low maintenance and inspection costs.

The motorcycle drives almost silently, weighs 130 kilograms and accelerates from 0 to 100 km / h in 4 seconds. The battery has a capacity for a journey of 70 to 80 kilometers – Borkum is 31 km² in size – and is fully charged again in three hours.

Alwin Otten GmbH in Meppen took over the conversion of the Zero FX 6.5 in cooperation with the Osnabruck Police Department. This includes a special paint, a triple anti-corrosion paint and a compression of the electronics, which is necessary because of the increased salt content in the air on Borkum. Special tires and a topcase also distinguish the police e-bike from standard models.

In Lower Saxony, the police have 38 electric and hybrid vehicles, 19 electric bicycles and 46 charging stations. At the end of November 2016, Lower Saxony’s Minister of the Interior and Sport, Boris Pistorius, gave the project the go-ahead “silent & ready to use”. As part of the three-year research project, the Lower Saxony police, together with the Research Center for Vehicle Technology at the TU Braunschweig, want to develop a guideline for the integrated planning and control of fleet, charging and energy infrastructure. As part of this project, 50 hybrid and battery-electric patrol cars and 30 charging stations are to be procured.