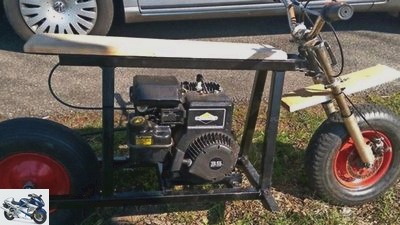 No, a scarifier is not the vehicle from a science fiction series that chugs you through the next wormhole into a parallel universe at hellish lawnmower speed.

He is responsible for the lawn aeration. And for driving this vehicle.

And the tires? Looks a bit like Supermoto, doesn’t it? Yeah, ok, not exactly. The young inventor stole it from a wheelbarrow. The front mudguard – or rather the protective board – could set off a new trend in the custom bike scene, but the wooden bench seat might not. Whether the telescopic fork construction and the brake shoes on the wheelbarrow rim are functional, we can unfortunately only oracle based on the picture.

The heart of the do-it-yourself construction is the motor of a garden scarifier. It sits in a square frame that doesn’t allow too much ground clearance, but comes with integrated footrests. We suspect that the engine plays a supporting role here, but not a supporting one.

Seasoned lawn owners know that a garden scarifier is a device that is used to scratch the sward to provide better ventilation. A search engine query tells us: Petrol scarifiers with a four-stroke engine easily have a capacity of around 160 cm³ and three, four, five hp and more. The 14-year-old pilot in Fintel, Lower Saxony, could also have been motorized in this way – until a police patrol stopped him.

Vehicle papers? Of course not. Driver’s license? Is possible from 15 years at the earliest. So: shut down the scarifying custom moped and let the parents know. The Rotenburg police station reports: “Due to the lack of insurance coverage in connection with other vehicle defects, the young man was of course prohibited from continuing with the vehicle and his parents were informed personally.”

It is not known whether the young driver is also the designer and builder of the vehicle himself.