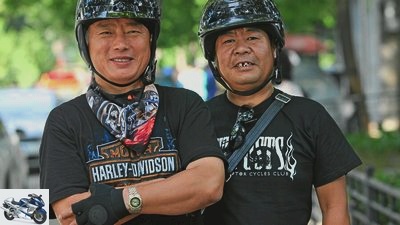 In a quiet corner, hidden in the alleys of the old town, there is the “Outpost”, a motorcycle bar and the perfect place for a conspiratorial meeting with the outlaws of Beijing.

The only sound is the lonely whirring of the ceiling fan, nothing going on in this deserted corner. The door of the “Outpost” is decorated with ornaments with crossed guns and skull bones, in front of which hangs a gallows rope. The hand of the clock drags itself tiredly through the scorching midday, it is still a little early. Sst, sst, sst does the fan. Then thunder breaks the silence. There are riders. According to the noise, around 150 horses are approaching with steel hoofs. Quiet again shortly afterwards. Four riders get out of their saddles. Three Harley-Davidson motorcycles are parked in front of the saloon.

The “Outpost” is not located on a dusty street in South Texas, but in one of Beijing’s old town districts that have become rare.
The rough wooden planks of the veranda offer a colorful contrast to the gray bricks from which all of China was once built. Many of these neighborhoods, known as hutongs, with their narrow streets have been flattened for business districts in recent decades. Modernity is galloping faster in China than in any other country in the world. 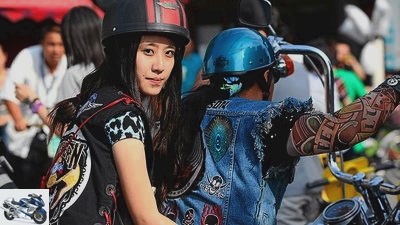 Zhou Jing Ya doesn’t have a motorcycle license, but likes to ride in the back. She likes the vibrations.

The motorcycle world in China, on the other hand, is similar to the German world in the 80s. Young people love speed and swear by Superbike offshoots from Honda, Yamaha and Suzuki. But a BMW is also considered a fire chair in China, and so Wang Chang Yong first bought a Bavarian motorcycle. “I’ve already driven 230,” he says proudly and lights a Yuexi cigarette. In all these years he had only one accident: “I didn’t unfold the stand properly and just fell over.”

Zhou Jing Ya is 20 and actually rides a mountain bike. Your skin wears the elegant pallor, the ideal of beauty for 1000 years. Long, slender legs grow out of short hot pants. She poses in front of Da Mei’s motorcycle, on whose back seat she likes to ride through the weekend. She does not have a motorcycle driver’s license, life as a passenger is also happy, although she does not find it particularly comfortable: “I like the vibrations.” Miss Zhou is studying law – and wears a cowl. As a reference to the American bourbon brand, “Southern Uncomfort” is embroidered on the back. 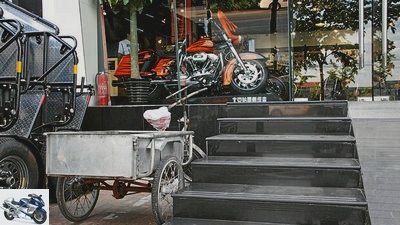 Harley-Davidson has only had a presence in China for a decade. The oldest store in Beijing is just eight years old.

The tanned face and long hair of the rider could also belong to an Apache. He wears a leather bag on his hip, and instead of a colt, it contains tobacco and a pipe. He would like the comparison with Geronimo, but the face with the laugh lines around the happy eyes lacks grim seriousness. The colorful tattoo on the arm is a fake, printed on a skin-colored shirt. “That way I can switch when I feel like it,” says Da Mei pragmatically.

His upper arms are almost the size of Zhou’s waist, and he is a fitness trainer. They are not a couple, “just friends,” as she emphasizes. He’s single too. In modern China, after decades of one-child policy, there is a surplus of men. If you don’t have an apartment or at least a car, you can go straight to speed dating again. Da Mei doesn’t care about such things. “Most people have normal jobs and families. I’m a rebel, I’ve always swum against the tide. ”He’s not poor, he just puts all his money into his Fat Boy. “A Harley like this has a lot more personality than a Japanese motorcycle,” he enthuses. He pimped his Harley with plenty of chrome and saddlebags. Where does he get the parts from? “It’s easy on Ebay.” The Chinese fluctuate between the sense of community carried on by the great Chairman Mao to excess, in which the collective is everything, the individual is nothing, and the search for individuality – for oneself. 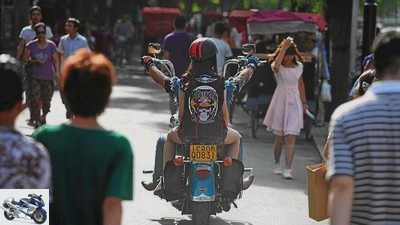 Where usually only rickshaws drive, a Fat Boy thunders through a hutong. The Harley community in Beijing has around 2000 bikes.

The Harley men decorate their motorcycles with skulls so that they don’t look off the shelf, but in the end all of them have polished bones somewhere on the bikes. They wear Harley T-shirts, Harley belt buckles or Harley scarves. In their quest to be different, they are looking for like-minded people and uniformity, and that’s why Wang has to change clothes first. The white Adidas shirt doesn’t work at all, think the others. He chooses a black T-shirt with the inscription “Outpost Outlaw” from the display case. Wang grins into the lens as a freshly disguised bandit with a wide gap between his teeth.

When Da Mei’s gang rides out with 60 men on the weekend, they like to wear helmets with horns. Your group is called Niucun, which means cattle village. You drive into the mountains, there are more bends, you invade country inns, where there is simple, traditional food. They are individualists, but if possible, then in a group. This is also felt by the state authority. Many bikers are on the road without authorization. The police usually turn a blind eye. If the cops try to stop the horde anyway, it won’t be easy for them. The outlaws drive in a crowd in the middle, they often pass the officials, clap their hands raised as they drive past and ride on – high five in Chinese.

The outlaws of Beijing 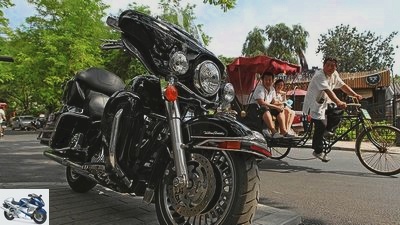 The central government doesn’t like motorcycles, too many serious accidents. In China’s anarchic traffic, it is true that motorists are mostly to blame, but in the Far East, as in the Wild West, the law of the fittest applies. Sedans stand out from the compact class, SUVs stand out from sedans, motorcyclists are at the lowest level, and cyclists, like pedestrians, are not considered serious road users anyway. The state even temporarily banned motorcycling. In the capital Beijing, bikes are taboo on the first ring road, and the registration office is reluctant to release license plates. Whoever has one keeps it like treasure.

“Something is wrong in their heads,” says Zhou Yue of the party leadership. He too recently turned the license plate back on. Zhou is an event manager, has worked in Europe and is proud of his daughter who has just moved to America. He doesn’t like beer and pork knuckle, but he likes German autobahns and German technology. He had a BMW K 1600 until last April, when he switched to an Electra Glide. “The BMW was too perfect for me, and all my friends drive Harley.” 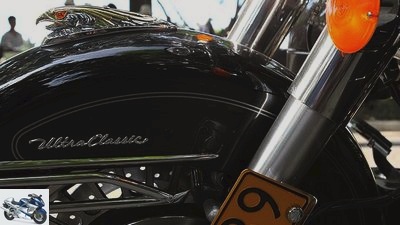 You don’t actually see yourself as a revolutionary. Some have seen “Easy Rider”, but the image of the bad rocker is not hers. They’re not political either. The fact that they live out their passion for one of the greatest symbols of capitalism in one of the last reserves of communism should not be a statement. And yet they love the touch of anarchy when the iron pots of the two-cylinder stumble and gallop wildly and one of them drowns out all the electric rickshaws in the neighborhood. They like the attention when their shiny chrome steeds turn their heads, enjoy the envious faces of the rickshaw rompers and the looks of young women.

In addition to the driving experience, Zhou especially loves the fact that there are plenty of clothes from the American cult brand. In China, too, the successful men of Beijing value a Harley as a status symbol. The state levies high import taxes. Zhou’s Electra Glide costs the equivalent of $ 60,000. The US cult brand has been present in Beijing since 2005. Business is going well and would be even better if the state didn’t keep putting obstacles in the way for bikers. “Otherwise China would be the largest motorcycle market in the world,” they are certain. But because life is so difficult here, the importer organizes trips to California or Europe. 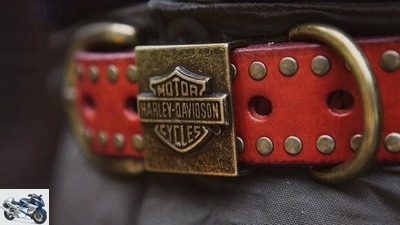 Harley clothes are of course mandatory.

Zi Shu is just back from a tour of Korea. He has already been to all of Southeast Asia with his 883 Custom, and of course he also made a long tour of China. “I’m not one of those people who just drive from cafe to cafe,” he notes. He shows photos of his 883 Custom digging through deep mud in Sichuan.

It is not a jewel, but a riding and pack horse that has lasted 48,000 kilometers in two years. It was the cheapest Harley in the catalog, and it still cost the equivalent of $ 20,000. “We Chinese earn less, we have to work harder for it. For the money you can get a Fat Boy in the States, “says Zi. Of course, the defects annoy him,” but with a Harley you can go anywhere if you want, “he says. He fell in Tibet, but his horse held out. For him, the Himalayan area is the most beautiful country in the world; he worships the Dalai Lama, whom the Chinese state considers a devil. “I have my own opinion on that. What we think and what the government says are two different things. “

The 40-year-old wants more freedom, “and the way to put it is to ride a Harley.” He was the first Chinese to get a license plate for foreign countries because he is on a mission. It is a pilgrimage – from the Middle Kingdom to the center of the world: to Milwaukee. Harley-Davidson is celebrating its 111th birthday this year, and Zi Shu wants to be there.

“Renting a Harley in the States is not an art, I want to be the first to arrive with a Chinese license plate.” It’s not just about riding a motorcycle. “It’s all about making friends,” he says with solemn seriousness. “Maybe then we will no longer be strangers and locals over there, but all brothers.”