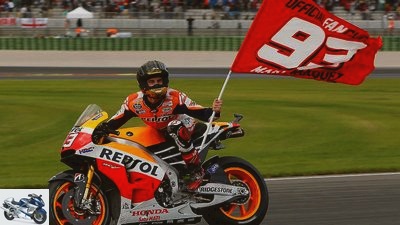 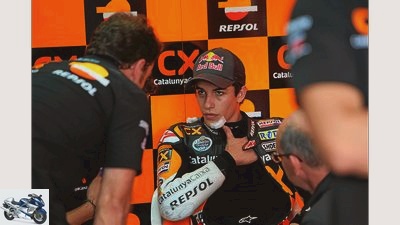 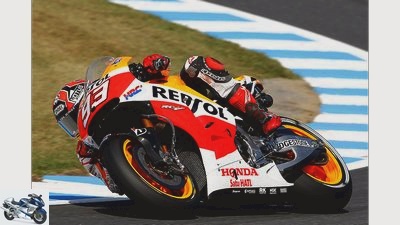 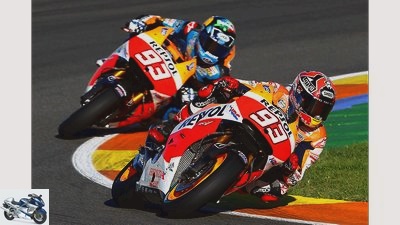 3/19
In any case, the two brothers already had the opportunity to ride side by side during the pre-season tests. 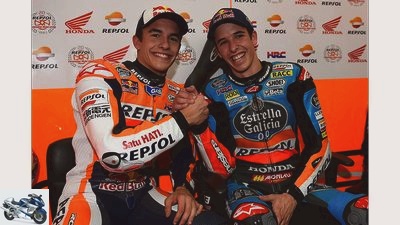 It is quite possible that at some point the two brothers will race side by side for Repsol-Honda. 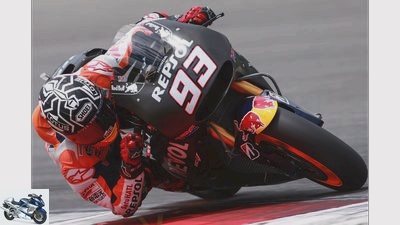 5/19
Marc Márquez during the pre-season tests for the 2015 MotoGP season. 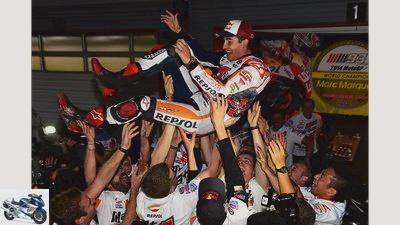 6/19
The young Spaniard’s recipe for success? A mixture of fun, hard work, a dash of natural talent and a great team. 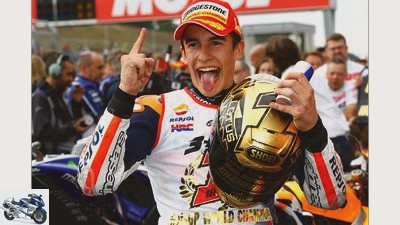 7/19
The golden helmet was given as an additional trophy after defending the world championship title. 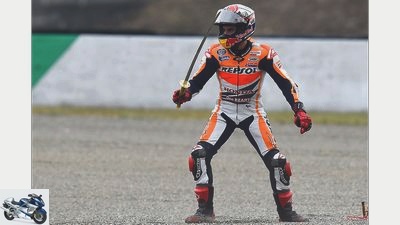 8/19
… at which Marc Márquez was presented with a samurai sword. 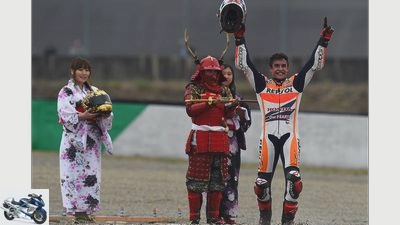 9/19
As a reward, there was a special ceremony on the run-out lap at the Japanese Grand Prix, … 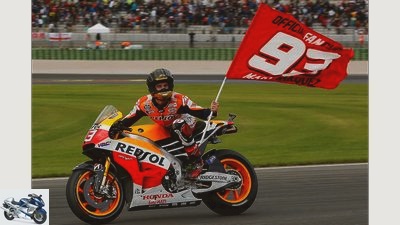 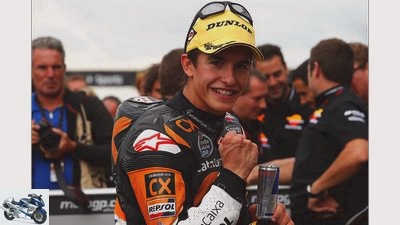 11/19
This was followed by the change to MotoGP. 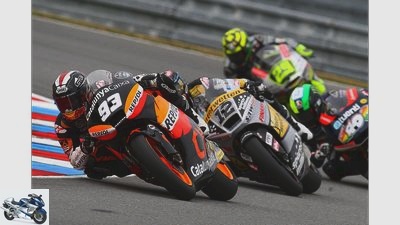 12/19
What he was denied in the previous year, Márquez caught up in 2012: With 324 points, the Spaniard became Moto2 world champion. 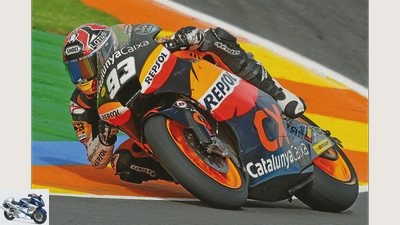 13/19
After winning the 125cc title, Marc Márquez switched to Moto2 in 2011 and immediately finished 2nd in the overall standings. 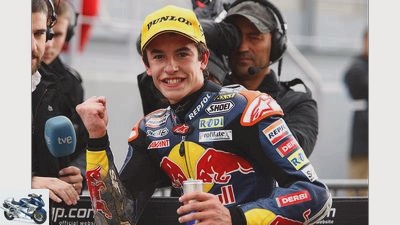 14/19
In 2008 Marc Marquez switched to the Repsol-KTM team and ended up in 13th place in the overall classification of the 125cc class. In the following season, the Catalan improved to eighth place. 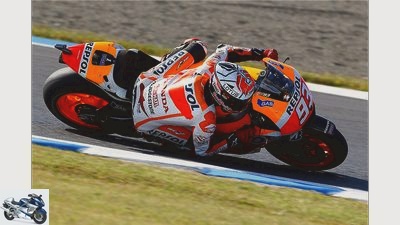 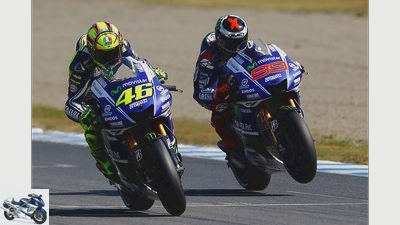 16/19
The two Yamaha riders Valentino Rossi and Jorge Lorenzo are probably the toughest competitors in the fight for the world championship in 2015. 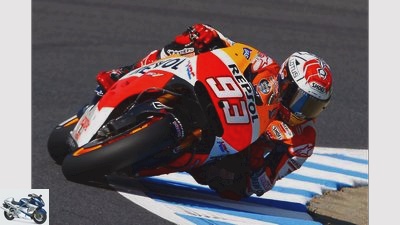 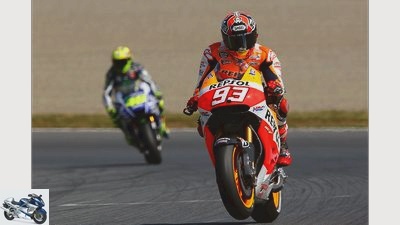 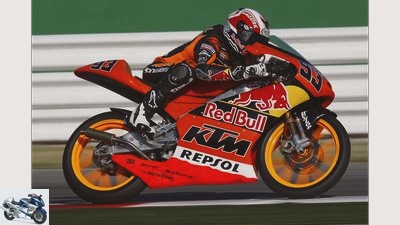 19/19
Marc Márquez was injured two races before the end of the season.

Second MotoGP season, second world title and several broken records. Marc Márquez is the star of MotoGP and is once again the top favorite for the title in the coming season. A look behind the Catalan’s impressive career.

The term “Bushido” from Japanese mythology means something like the “way of the warrior”. Centuries ago the samurai followed this code of conduct, which is composed of the seven virtues of honesty and justice, courage, goodness, courtesy, truth and truthfulness, honor and loyalty. If one had to choose one of these virtues to describe the Spanish MotoGP rider Marc Márquez, most would probably choose a mixture of courage and honor.

The young Spaniard from Cervera won his second world championship title in his second season in the premier class of motorcycle racing, broke numerous records and impressed with his aggressive and spectacular driving style. At the same time, Marc Márquez was impressive with risky overtaking maneuvers in which he showed his opponents their limits.

In the 2014 season, Márquez, known by the nickname “Rookie # 93”, secured the world title early on at the race in Motegi / J. As a thank you, those responsible for the Japanese GP rewarded him on the run-out lap with a very special ceremony: Marc Márquez received a sword from a samurai in honor of his world championship title.

In the times of the samurai, the so-called “katana” were not just tools of battle, but were called the “soul of the samurai”. A special honor for Marc Márquez.

Racing career started at the age of six

But where does the Spaniard’s irrepressible will to win come from? What distinguishes this young man from the other drivers in the field? It is undisputed that Honda will provide him with one of the best, if not the best motorcycles in MotoGP. However, it is also undisputed that no other MotoGP rider goes into overtaking maneuvers with as much risk as Marc Márquez: “Fear is something for the fearful,” he once said.

The young Spaniard makes no secret of the fact that fun is the focus for him. His recipe for success consists of a mixture of fun, hard work, a dash of natural talent, the right environment and a great team. Marc Márquez began riding motorcycles at the tender age of five. He started his career with motocross and minibike and only later switched to road racing. At the age of 8, Márquez won the Moto-X in the 50cc category for the first time.

Two years later, after moving to road racing, Márquez became the Catalonian Open Champion. After further titles in the 125 cc category in Catalonia, larger racing teams became aware of the Spaniard, who is known as a joker. In 2008 Marc Márquez, at the age of 15, competed for the Repsol KTM team in the then 125 cc motorcycle world championship.

Marc Márquez’s first season in the 125s was not a march through, however. Due to an injury, Márquez started the season a little later and had to abandon it because of a serious accident in Malaysia. At the end of the season there was a podium, several top 10 placings and 13th place in the overall standings on the credit side of the driver with starting number 93. In his second season with the Repsol KTM team, Márquez improved and reached eighth place in the Overall rating.

Together with Sandro Cortese at Ajo Motorsport

After the Repsol KTM team withdrew from the 125cc World Championship after the 2009 season, Márquez switched to Ajo Motorsport. His teammate at the time: Sandro Cortese. The new season started with a place on the podium in the race in Qatar and a retirement in the home race in Spain. At the end of the season, after many ups and downs, the 125cc world championship jumped out. At the time of winning the world championship, Marc Márquez was 17 years and 263 days old (behind Loris Capirossi), the second youngest 125 cc world champion ever. In 2011 he was promoted to Moto2.

The Catalunya Caixa Repsol team signed the newly crowned Moto3 world champion. Main opponent in the 2011 season: Stefan Bradl from Germany. At the beginning of the season, the Swabian was able to build up a solid lead, which he ultimately no longer gave up. To make matters worse, Marc Márquez was injured two races before the end of the season, and Stefan Bradl won the Moto2 title. What he was denied in 2011, Márquez made up for in the 2012 season: after a dominant season, Márquez confidently secured the Moto2 world title and then signed a two-year contract with the Repsol Honda works team for the MotoGP class.

Record after record in MotoGP

In his opening race in MotoGP, Marc Márquez only had to admit defeat to reigning world champion Jorge Lorenzo and MotoGP legend Valentino Rossi. At the second race in Austin, Márquez took victory from pole position, making him the youngest MotoGP winner of all time. At the end of the season, Márquez secured the world title in his first MotoGP season: at 20 years and 266 days, he is still the youngest world champion in the largest Grand Prix class, i.e. the 500cc GP and (since 2002) MotoGP combined.

In addition, Márquez was the first rookie since 1978 to win the world title in the premier class. The success story continued in the following season: Marc Márquez won the first ten races of the season and also grabbed pole position in the first six races. After just 15 of 18 races, the Spaniard was crowned the best MotoGP driver for the second time in his second season.

At 21 years and 237 days, Marc Márquez is the youngest driver to have secured the title in the premier class twice. At the race in Malaysia, Márquez took the 13th pole position of the season and broke another record. With the 13th win at the end of the season in Valencia, Márquez cracked the record set by Mick Doohan in 1997. Records for the ages? Perhaps. In any case, one thing is certain: the path to fame, honor, truthfulness and the MotoGP world championship title will not be trodden in the 2015 season without the man with the starting number 93. 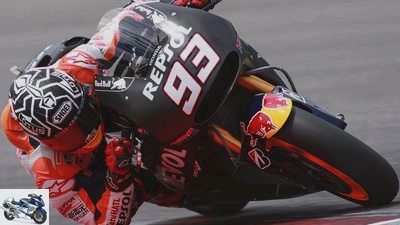 Marc Márquez during the pre-season tests for the 2015 MotoGP season.

Rossi and Lorenzo on Marc Márquez 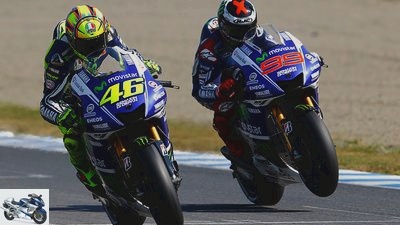 Probably the main competitors in the fight for the title in 2015: Jorge Lorenzo and Valentino Rossi.

In the coming season, Marc Márquez will again be the number 1 title contender. The main competitors are again likely to be the two Yamaha works drivers Valentino Rossi and Jorge Lorenzo. What do the two Yamaha riders say about the two-time MotoGP world champion?

Valentino Rossi is the living MotoGP legend par excellence. The Italian is now in his 20th season and is one of the favorites for the title after his strong performances last season. Already in Marc Márquez’s first season in MotoGP, the Italian said of the two-time world champion: “I think we have something in common: We love the fights and are both strong in the immediate duel. We both started when we were around 20 years old. But he’s better than I was then. I think he will hit me. “

Two-time MotoGP world champion Jorge Lorenzo had a rather sobering season last year. This year it should get better. His opinion on last year’s world champion and compatriot Marc Márquez: “” Marc Márquez is very fast and very talented, just like his predecessor at Repsol-Honda Casey Stoner, who even drove to the top with Ducati. Marquez is cut from the same cloth. He’s in top shape and can explode on a fast lap. Of course the Honda works very well too, but Marquez is already very fast. “ 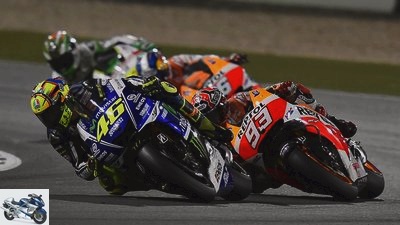 In the opening race of the 2014 season (also in Qatar) Marc Márquez won ahead of Valentino Rossi and Dani Pedrosa.