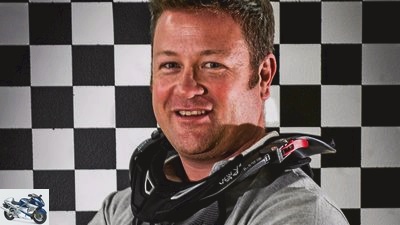 Chris Leatt is a passionate motorcyclist. When his friend dies in an accident, the neurosurgeon decides to develop a protector for his neck. Meanwhile, the “neck brace” has become indispensable for many rally and cross pilots. 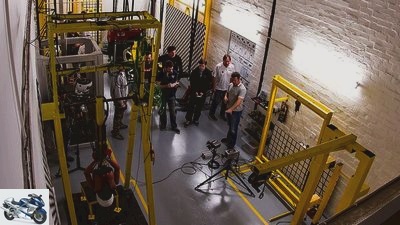 Around two million euros are in Chris Leatt’s laboratory, which is crammed with hybrid 3 dummies and computer-controlled drop test stands.

Cape Town, South Africa. A compact, ocher-colored functional building the size of an apartment building stands in a fenced industrial park on the green edge of the pulsating metropolis. The owner’s name is emblazoned in yellow letters on the front: Leatt, next to it the logo of his company, a notched triangle. Symbol for the product that is being developed here: the Neckbrace, a kind of high-tech ruff for motorcyclists. Chris Leatt, born in 1968, does not correspond to the image of a fanatical Security Apostle with a raised index finger. Motorcycling has been a passion for him since he was a child.

First on minibikes in the extensive area around Cape Town, then increasingly on racetracks. And that to this day, when he competes in national cup races with a BMW F 800 R. The blue eyes under the blond hair are shining: “I love to race. But I’m even more into the smell of two-stroke engines. Back then, I tuned them for as long as they could. ”Yamaha RZ 50, Suzuki RGV 250 Gamma, his collection includes 16 bikes, which he distributed in his house. And what is his favorite bike? A movement of his head points to a small room in the industrial hall, and he hurries ahead: “The old motorcycles are nice to look at, but this one is nice to drive.” The joke flashes out of his eyes when he clicks the start button of the Aprilia Dorsoduro 1200 presses, and Vau zwo barks out of open Leovince bags: “Hey, man, this is South Africa!”

In 2001 something happened that turned Chris Leatt’s life upside down. A good friend falls off-road, the accident looks unspectacular. Slow speed, exit over the handlebars, not dramatic and yet: The neck injuries are so severe that any help comes too late. That, Leatt decides, shouldn’t happen again. Especially not his three children – his four-year-old son Matthew had passed the baptism of fire on a minibike the previous weekend. The neurosurgeon with a doctorate in neurosurgery packs up his knowledge and begins to develop neck protection after work that can minimize the dangerous compression and overstretching of the cervical spine. His goal: “At least 20 percent of the forces that occur when falling on the head must be diverted!” He puts the first prototype around his wife Jacqueline’s neck like a diamond necklace, in 2004 the first neck brace is finished, and Chris Leatt is hanging hooked up his job as a doctor after more than 250 brain tumor operations in order to devote himself to developing and selling his “Leatt Brace” with his own company. In the years that followed, he was able to get BMW and KTM enthusiastic about his project, which from the end of 2006 will also be selling the neck protection under their own label.

With off-road drivers, but especially with the Dakar rally drivers, the Neckbrace was very well received within a very short time. Because falls over the handlebars due to a front wheel folding away on the dune ridge are not uncommon in desert rallies. And the ruff is tailored to the risk of injury. Almost all Dakar drivers now wear a neck brace, be it from Leatt or competitors such as Alpinestars, Ortema or EVS.

Half a million neckbraces sold

The most prominent test driver to this day is Dakar winner Cyril Despres – in conjunction with his mother: “It happens that Cyril is on the road with prototypes from us and his mother has his ideas for improvement incorporated with a needle and thread,” says Chris Leatt during the tour through the company building, which, by the way, is only used for research and development. The first neck braces were still produced in South Africa, but production has now been outsourced to China. At the headquarters in Cape Town, 28 people work for the Leatt Corporation; worldwide there are almost 50. A good half a million Neckbraces have now been sold.

The heart of the company is the extensively equipped laboratory in which a team of biomechanics can test new protector systems for the neck and other parts of the body on various drop test rigs and using computer simulations. According to statistics, says Leatt, the neck is only affected in five percent of cases in accidents: “But the consequences are serious or even permanent.” At the end of the tour we are back in front of the Dorsoduro, with a GS parked next to it. Chris’s eyes flash again: “Do you fancy a tour to the Cape? Best over the Garden Route: These are the best curves in South Africa! “