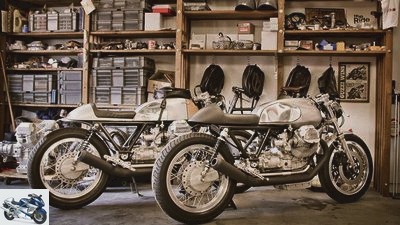 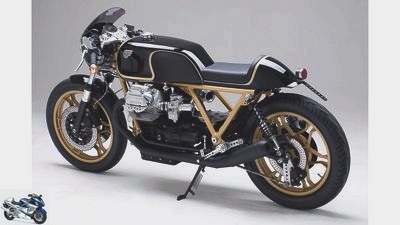 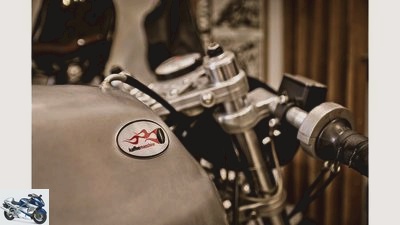 2/17
Finished conversions are provided with the emblem of the coffee machine label. 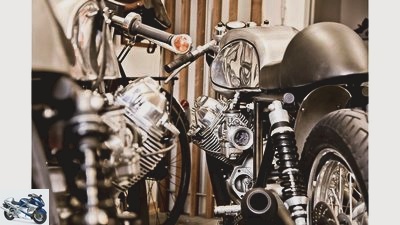 3/17
Budde buys his first Guzzi, a Le Mans 4 on spoke wheels, with his best friend in Aalen. 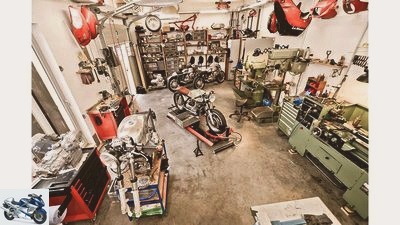 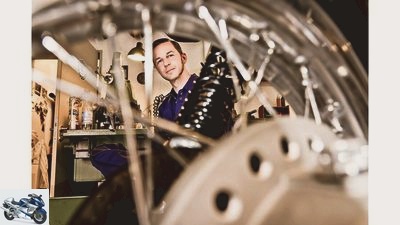 5/17
Just looks like doing nothing. “Mr. Guzzi” while tinkering. 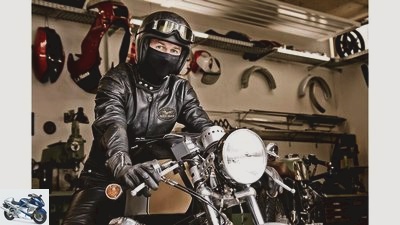 6/17
You have to drive yourself. “Sometimes,” says Budde, “I just hear and feel the engine and I feel better. 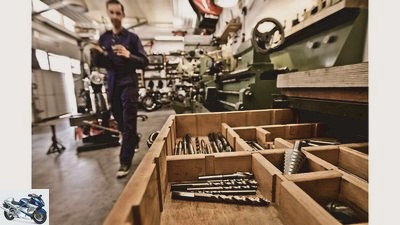 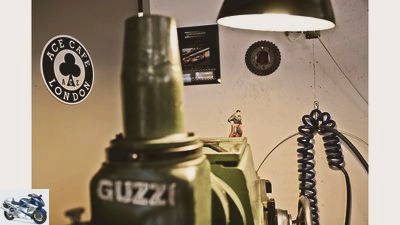 8/17
The Superman figure stands with legs apart on the universal milling machine and stretches his right fist towards a ring spanner and an open-end wrench, as if the tool had to be conjured up, provided with special powers in order to be able to carry out its special task. 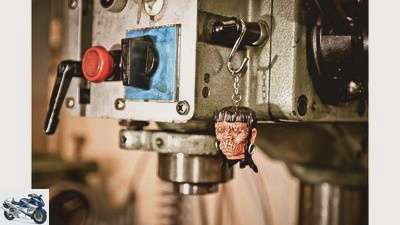 9/17
The shrunken head has the best place. He’s hanging on the drill press. 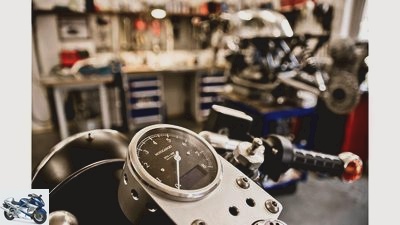 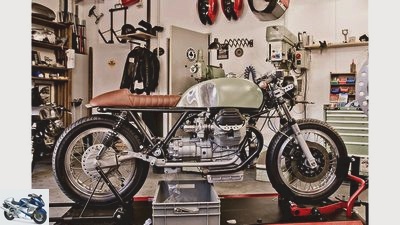 11/17
The Guzzi conversions are made by Axel Budde in Hamburg-Wilhelmsburg. 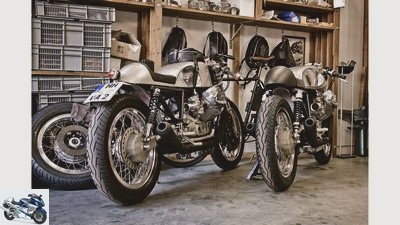 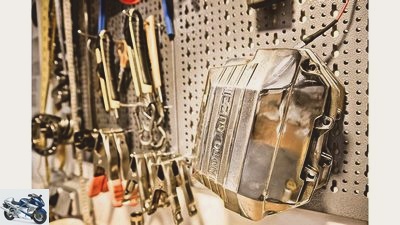 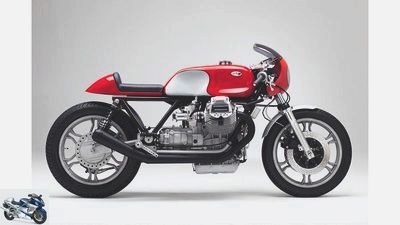 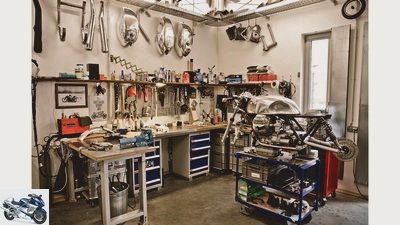 15/17
The picture of Rolli Free hangs on his Vincent above the welding machine. Axel Budde recently also built a coffee machine for its current owner. 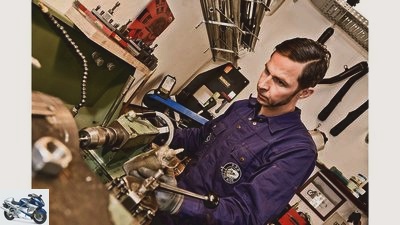 16/17
Axel Budde takes apart what Moto Guzzi once built and then puts it back together again. 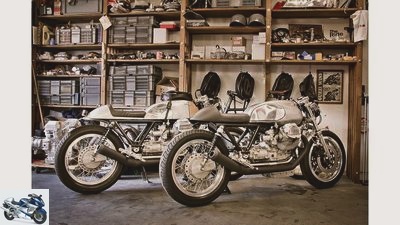 17/17
Axel’s own machines, in the back the Guzzi for the road, in the front those for the racetrack.

Axel Budde builds Custom Cafe Racers based on Moto Guzzi under the label coffee machine. MOTORCYCLE has “Mr. Guzzi” visited in his workshop in Hamburg-Wilhelmsburg.

The shrunken head has the best place. He’s hanging on the drill press. From there he would get everything. But he doesn’t see anything. His eyes are sewn shut. He couldn’t divulge secrets anyway. Eight stitches hold his plastic lips together. Superman is doing better there. The figure stands with legs apart on the universal milling machine and stretches his right fist towards a ring spanner and an open-end wrench, as if the tool had to be conjured up, given special powers in order to be able to fulfill its special task.

Photo of Rollie Free above the welder

But that is only half the story. The cursory glance only grazes it, then wanders off, walks across the smooth floor past a trolley on which a new coffee machine is being built around the mighty motor. On the front wall, he works his way over the workbench to a red welding machine, where he can hang on to a photo. The American Rollie Free chases long on his black Vincent over the salt of Bonneville with the utmost concentration and otherwise only in a pair of swimming trunks.

This picture contains the other half of the truth of what Axel Budde does when he builds a motorcycle. Just as one could say that Rollie Free simply accelerated to break a speed record, one could say that Axel Budde simply screwed around to rebuild a machine. But that’s just not it. So what? Rollie could easily answer the question. “Just look at him,” he would say, “when he’s at the lathe, how he takes things in hand, how he looks at them and how he devotes himself to them. What do you think “, he would ask,” why he’s been busy making coffee for so long? “ 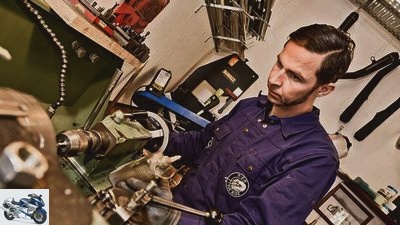 Axel Budde takes apart what Moto Guzzi once built and then puts it back together again.

That’s how it started. “Shall I make a coffee first?” Axel asked and then pushed, it took a moment for the machine to warm up. Meanwhile he grinds the beans, the grinder between his knees, uniformly, patiently, not too quickly. And on the matter. So he does it before he disappears through the door with the Ace Cafe sticker in front of the poster and postcard spectators Steve McQueen and Burt Munro at the Pavoni. It takes as long as it has to take for someone to do what they do as well as they can. Axel reappears with the question “Sugar?”.

He stands there in his blue overalls with the brass buttons and looks somehow like the motorcycles he builds. Long, slim, reserved, accurate. Without frills, but with an almost elegant style. Perhaps this similarity stems from the fact that the machines are always Axel Budde’s personal expression, that they reflect his views and embody his relationship to motorcycling, a relationship that has a lot of necessity and conviction and never lost the fascination of the immediate.

“Machine pushes you to your limits”

He calls it “elementary”. He means: “You can control the machine. But just like that. Not easy, not without effort, not without always looking forward to surprises. You push the machine to its limits, the machine pushes you to your limits. This equilibrium creates a connection, this equilibrium carries a feeling: You fill the motorcycle with life, the motorcycle fills you with life. ”He sits on a turntable with a chocolate biscuit in his hand while he describes this, but he does it again and again As if he were sitting on a Guzzi, leads his hands to the handlebars, leans forward, upper body to the side, left bend, straighten up, accelerate …

“There was little in life,” says Axel as he walks over to the lathe, “that got me on my knees like mopeds”. The first thing he buys from the sour self-earned is not what he wants. Even at school he wears a Triumph belt buckle – it hangs on one of the workshop shelves today – and dreams of a Bonneville. He lands on a BMW R 50/5. After graduating from high school, it not only carries him through East Westphalia, but Axel doesn’t make it to the top five. When the humming of the lathe mingles with the music of Duke Ellington and Johnny Hodges and Axel puts on dark work gloves, he turns around again before he grabs his workpiece and says: “Back then I often thought I’d have this one damn Bonneville should go. But who knows how it would have happened then. “

Probably not the way it turned out. One morning he reads an advertisement in the “Neue Westfalische” newspaper. It outlines what hits Axel like a hammer a little later: “I never looked at anything else, I never wanted anything else.” The simple, straight line of the converted Guzzi T3 follows him. And he’s chasing them. With the best buddy in his mother’s panda to Aalen. Axel Budde bought his first Moto Guzzi there, a Le Mans 4 on spoked wheels. Over the years he continues to rebuild it, toss it away, and to rebuild it. And feels that he would “do it again and again, according to a picture that I already had in my head.” The picture is clear and quickly outlined: “A filigree frame with this chunk of engine in it,” says Axel.

“It’s the combination of everything I expect from a motorcycle. The way the engine communicates, you notice in every speed range what you’re sitting on, plus that long, tree-stiff thing that got me. I drive a piece of metal, that was the feeling, and I remember very well that I thought I would like to be able to drive this thing one day, drive fast. ”He talks about how relaxing it is to drive a motorcycle, precisely because it is Demanding you, describes it as “precious”, to earn a distance by making an effort, also renouncing, describes a reduction that frees you for the essentials.

Axel builds the first coffee machine to order for Purser

When he finally sets out to cut threads in the ends of the shaft, he no longer speaks. It wouldn’t work, because he disappears into what he is doing, he sinks into every little hole he drills, and he bores into every detail that will later make up this special charm of his machines. A stimulus that makes you almost in awe, nods your head quietly and only gradually discovers why. The shortened Tonti frame with the open triangle hides the electrics, rounded head covers, the tanks sometimes in the Magni, mostly in the British style, the juxtaposition of matt and less shiny surfaces, the open intake funnels, but mainly these lines, which never running against each other or crossing each other, symmetry, proportions, a balance of heavy and light.

Axel’s first Guzzi already shows this. It stands next to his racetrack machine on one side of the workshop. The Englishman John Purser sees a picture of her on the net and knows immediately: That, that is exactly what the California T3 should become, which has been in my mind for so long and which is partially dismantled in my barn. Axel builds the first coffee machine to order for Purser. The twelfth – red tank, 182 kilos, 90 hp – went to California in a box in early May. “When the customer came to visit me and we were talking about the motorcycle, at some point he pointed to the picture above the welding machine, Rollie Free, and he said, I have that one. And I say, oh what, a Black Lightning? No, he says, exactly this Black Lightning, with which Rollie set the speed record in 1948. “Crazy: The original Vincent from Rollie Free. And a coffee machine from Axel Budde. 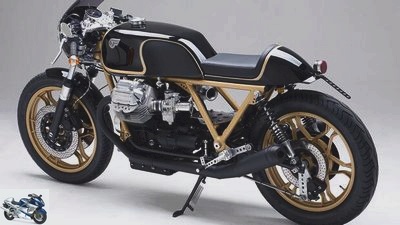 Axel Budde built the first coffee machine in early 2011. Since then, a good dozen cafe racers have emerged in his workshop. All by arrangement, and all actually far too cheap for hundreds of hours of manual labor to lie between the Guzzi base and the unique pieces that Budde builds from it. Contact: Rotenhauser Strabe 75a, 21107 Hamburg, Telephone 0 40/23 55 40 39. Pictures of the machines at www.kaffee-maschine.net. More impressions from Budde’s workshop in Wilhelmsburg at www.motorradonline.de/budde