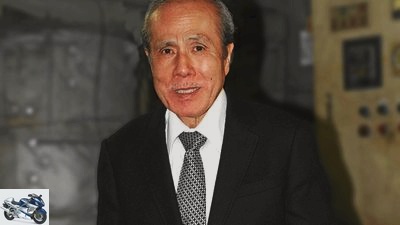 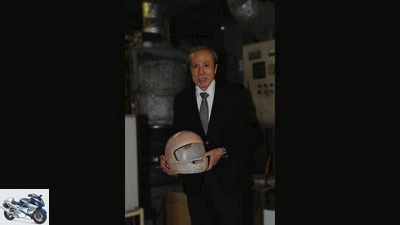 1/14
It takes 75 days for a new Arai helmet to end up in the box from the gluing of the first glass fibers to the insertion of the visor. And Mitch Arai, son of the hatter Hirotake, is 75 years old. 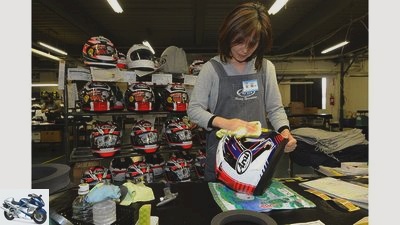 2/14
After 75 working days, the finished helmet goes into the cloth bag. 300 people are employed at Arai in Japan, 300,000 helmets are produced annually. 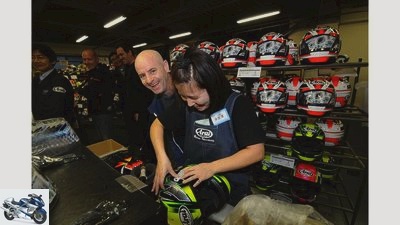 3/14
Top testers Schwers and service guru Lohse are even allowed to actively intervene in production. 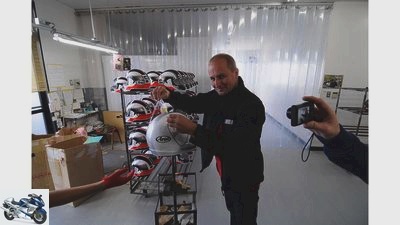 4/14
A visit to the factory is not only interesting, but also informative. 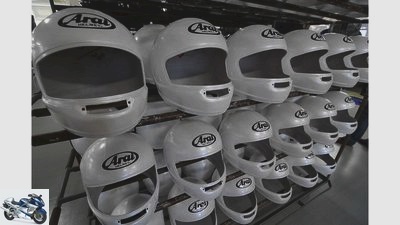 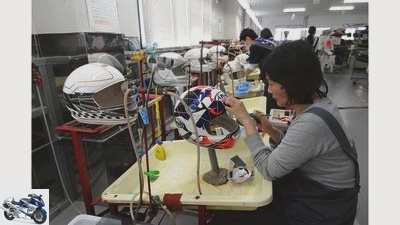 6/14
Before the clear lacquer is applied, the decor is applied in filigree manual work. 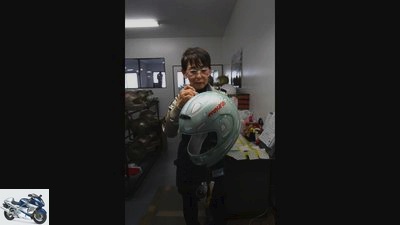 7/14
The helmet shells are then prepared for sawing out air inlets and accommodating add-on parts. 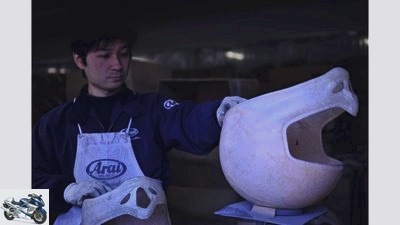 8/14
This is what an unpainted and unpolished helmet looks like. 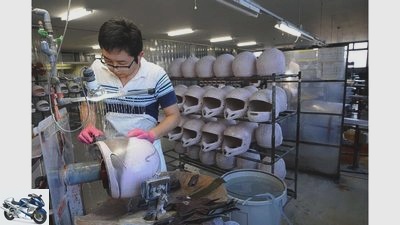 9/14
The combination of painting and polishing should ensure a perfect surface finish and not drive the weight up unnecessarily. 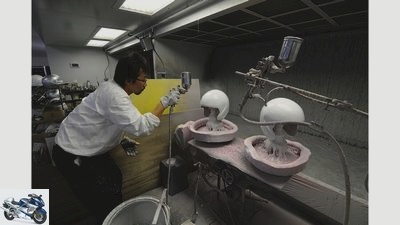 10/14
With the shell, it goes on in umpteen individual steps. Here the helmets are being painted. 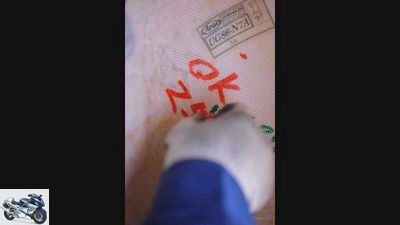 11/14
Letter and seal: every work step is documented in the helmet shell. 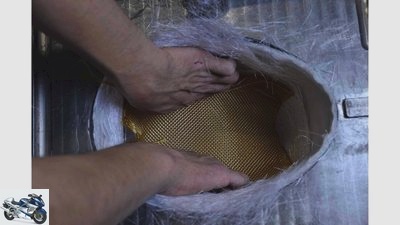 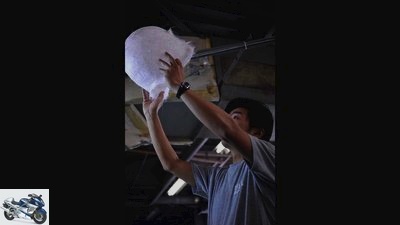 13/14
Tradition: Arai helmets have been made from fiberglass for decades. 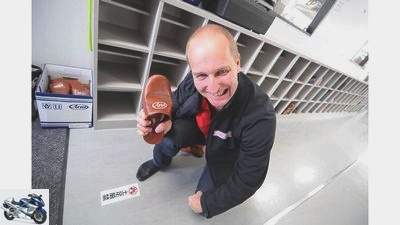 14/14
In the factory, too, the motto is: Take your shoes off and put them in the panties.

Mitch Arai, son of the hatter Hirotake, is 75 years old. Since 1986 he has been running the family business in Ohmiya, Japan, in the second generation. A portrait of the head of the Japanese motorcycle helmet manufacturer.

Does that sound familiar to you? One of your beloved US thrillers is just starting on television, and the leading actor, who is already a little gray, enters the scene. The first words fall, he speaks with this well-known dubbing voice: sonorous, bassy, ​​smoky. A thoroughly sympathetic voice that not only sounds absolutely familiar, but at the same time gives you absolute trust. When the calm comes in, but there is also plenty of tension. Are you attuned enough?

Then sit with us in diffuse light in an unadorned room, on a cheap plastic chair, at a worn table in Ohmiya / Japan and listen to Mitch Arai talk about how he tells the story of his life. Actually, so begins Mitch, whose real name is Michio and was born on July 22nd, 1938, the story of Arai is more than 100 years old.

From hats to hardhat and motorcycle helmets

It begins in the aforementioned Ohmiya, an industrial city near Tokyo that is now part of the metropolis of Saitama. At the turn of the century, his grandfather Yuichiroh’s hats were particularly popular there in diplomatic circles and with local political figures. Anyone who had seen it on the social floor put an Arai-san hat on their head. One year before Mitch was born, his father Hirotake was supposed to set the course for the future of Grandpa’s family business.

At the age of 31 he founded a hat factory which, after the Second World War, specialized in the manufacture of protective helmets for construction workers and miners. But Mitch’s father wasn’t just an entrepreneur. He was also a passionate motorcyclist. Real, i.e. effective, head protection did not yet exist in the post-war years, which is why Hirotake adapted one of its construction helmets for its own use. Word of this quickly got around in the scene, and Hirotake began building motorcycle helmets for Japanese racing drivers in the early 1950s. 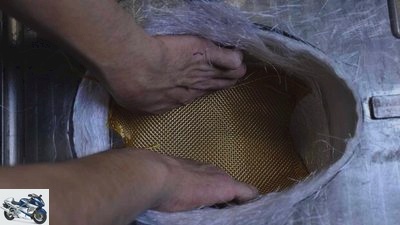 Time and again, his son tells us today, the question naturally arises of who actually developed this modern version of a motorcycle helmet first. Because at the same time, the first Bell helmets were made in California. To find the right answer, Mitch laughs, you have to hire a few more historians. In any case, his father’s business was picking up speed in the direction of two-wheelers – which was also due to his contact with Soichiro Honda, who was looking for suitable suppliers for the development of his legendary Super Cub. It was the exciting founding years of the Japanese motorcycle industry in which the business networks first had to be established.

Even though six decades have passed since that time and, of course, a lot of technical developments, modern materials and, of course, medical knowledge have flowed into the construction of motorcycle helmets – two essential building blocks from the late 1950s have not changed at Arai to this day: the basic construction of the helmet shell made of fiberglass, including a shock-absorbing core made of EPS, better known under the brand name Styrofoam. In order to check the effectiveness of his ideas and prototypes, Hirotake had to develop its own test methods at the time – the really relevant helmet standards around the world would not develop until years later.

Like his father, young Mitch was an avid motorcyclist who was particularly drawn to the racetrack. But at some point he began to recognize himself: “There are too many who drive faster than me. But I can build better helmets for that. ”After a few years in the USA (where his Japanese first name was eventually“ transferred ”to English), Mitch entered the family business in 1962 and concentrated on expanding the lucrative USA -Business. In the meantime, the first helmet standards had been established, and as early as 1963 Arai was the first Japanese manufacturer to pass the American “Snell” test, in which special attention was paid to the maximum penetration resistance of protective helmets. This philosophy also shapes the design of the Arai helmets to this day.

But that alone should not lead to decisive success in the land of unlimited possibilities. The manageable model range, which until then consisted of a few jet and full-face helmets (since 1967), only bore the initials of their builder Hirotake Arai on their foreheads. But the discreetly attached HA was not really suitable to make the Japanese goods palatable to the American consumer. Together with the then USA importer George S. Nicholson, Mitch pored over a solution during a visit to New York in 1970.


8 full-face helmets with sun visors in the test

Motorcycle helmets from 150 to over 600 euros

Both agreed that in the history of the brand it could really only be the family name that should adorn all helmets in the future. Together they sketched, assessed and then discarded. Coincidentally, a young design student was employed as a temporary worker in the New York office that day. The two men gave the 19-year-old their designs and asked them to use them to create a logo for the helmet brand. The next morning, the simple logo, known to this day, was on the desk – the name Arai in cursive, framed by an oval. Mitch was delighted and asked the boy what he wanted for his work. “Just buy me dinner and we’ll be even,” said the still unknown boy. “But then a really big one,” Mitch replied, handing him $ 90 – all the bills he found in his pockets.

But how do you sell motorcycle helmets when you don’t have to wear them? Mitch Arai, like Bell founder Roy Richter, relies on the argument that racing provides: maximum protection in the event of an accident! In the 1970s, the US competitor was still in power on the slopes, but increasingly top drivers also donned Arai helmets. Hirotake experienced Arai’s first world title with Freddy Spencer in 1983, before he died in 1986 and Mitch continued to run Arai Helmet Limited. And just like his father once did, the 75-year-old company patriarch, still an enthusiastic motorcyclist (BMW R 1200 GS), is not thinking of quitting today, although his son Akihito is already actively involved in the company management. This also seems to have a tradition at Arai.

Out and about in Japan: Always smile nicely 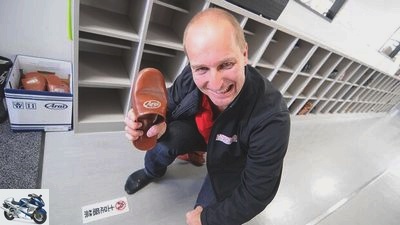 In the factory, too, the motto is: Take your shoes off and put them in the panties.

Imagine the opposite case: your own workplace, your usual colleagues – and suddenly a group of exotic-looking people is standing in front of you. Look closely at your fingers, suddenly pull out the camera and talk to each other in an absolutely incomprehensible language. It doesn’t have to be any different for the Japanese when a group from distant Europe suddenly turns up for a factory visit and looks eagerly behind the scenes.

But if you take a few things into account, the ice is broken quickly on both sides. First and foremost, of course, this includes respect and the natural acceptance of cultural peculiarities, such as the greeting ritual without handshakes, but always with a smiling bow.