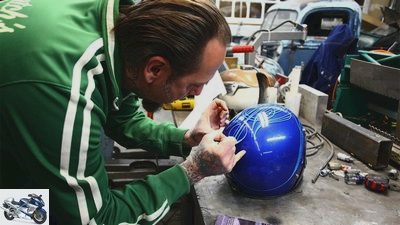 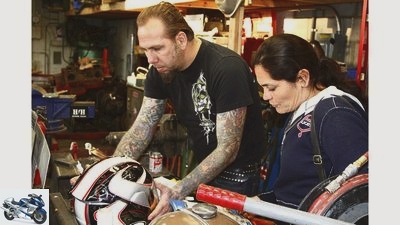 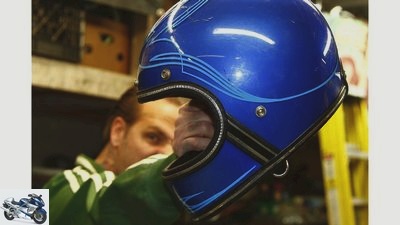 2/11
Skratch is always on the road to trade fairs in Germany. 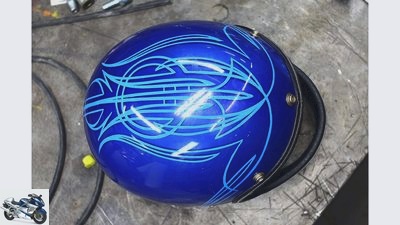 3/11
The model helmet was decorated in 15 minutes. 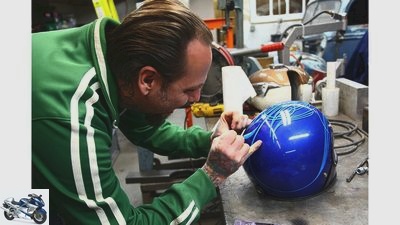 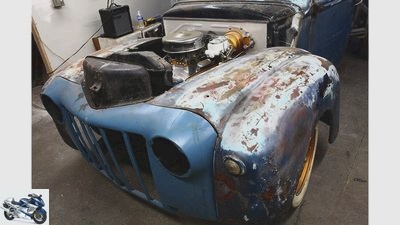 5/11
… It thus ties in with the origin of pinstripping. 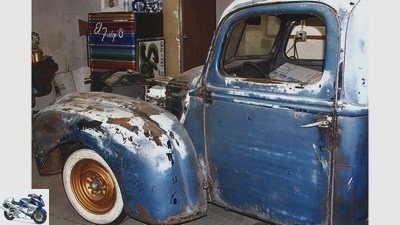 6/11
The other side of Skratch: The trained auto mechanic tunes, restores and maintains “Hot Rods”… 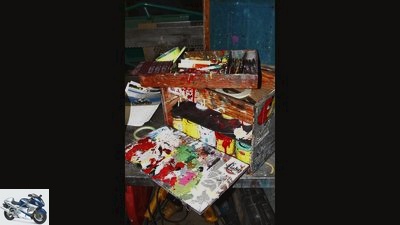 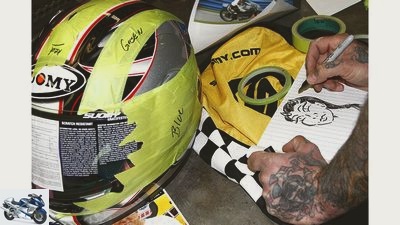 8/11
Broad stripes from front to back in red, green and blue are supposed to adorn the helmet. 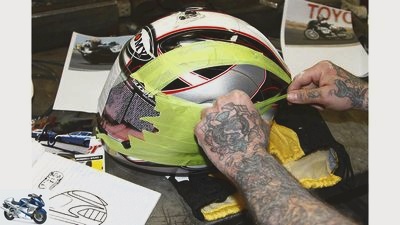 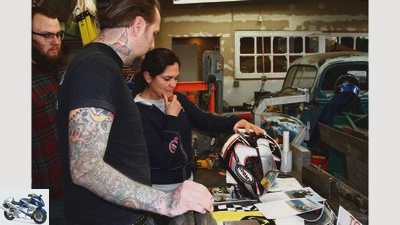 10/11
She is looking for a design that fits her current and historic racing motorcycles. 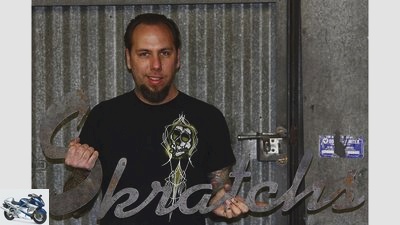 11/11
Skratch was born in Texas in 1972, founded his own company in 1993 and relocated to California at the turn of the millennium. You can find his contact details in the article.

He only has this stage name: Skratch lives for colors, shapes and vehicles. The trained mechanic is a pinstriper, a liner par excellence. How accurately he decorates fenders, helmets and tanks is impressive.

This is not how you imagined it: You drive to perhaps the most famous helmet decorator in the world (he designed various decorations for Bell), and then you don’t stumble over helmet shells, but over car chassis. “I’ve been working on cars since I was 16,” admits Skratch, the owner of the garage. They’re not just any kind of cars. But hot rods, US cars from the 1920s to 1940s with V8 engines. Skratch builds them from scratch, restores them, tunes them and maintains them. But we’re here today to experience Skratch as a pinstriper.

His name is a play on words: “to scratch” means “scratch” or “scratch”. The 43-year-old works very gently on the surfaces (“no matter what: tanks, fenders, helmets”) with an airbrush gun or brush. He should now swing it for Wendy Newton. The Californian doesn’t like the decor of her perfectly fitting Italian Suomy helmet. “I’m looking for a design that fits my current and historic racing motorcycles.” Skratch looks at photos, listens, ponders, makes the first sketches of the stylized racing amazon. And then begins to tape the helmet shell.

“Yeah, I have a couple of tattoos there”

It would have to be sanded down before painting. Anyway, the master suggests wide stripes from front to back, in red, green, and blue. Separated by freehand lines. Would you be able to see a “work sample” before placing the order? It was just a joke. Maybe you shouldn’t be joking with someone whose entire body, every spot of bare skin is tattooed over and over? “Yes, I have a couple of tattoos,” says Skratch of himself. A few? In and behind the ears, on the neck, on all fingers, the upper arms and forearms.

But Texans don’t need a lot of words. Not even if you’ve lived in California for 17 years. And so Skratch simply grabs a royal blue full-face helmet from the seventies lying around, with snaps to attach the visor. Then wordlessly opens his treasure chest, the paint box, and takes out his most important tool: the line brush, also known as the sword tug. This is an extremely long-haired, laterally flattened, one-sided beveled brush with a very short handle. It is used to draw long, even lines. Oh yes, and how!

After only 15 minutes, the work of art is ready

The concentration is enormous, the Californian air shimmers, while Skratch freehand draws light blue lines, supported by the little finger of the right and the entire left hand. Pinstriping (from English “pinstripe” = pinstripe) describes the decorative application of decorative lines, mostly on vehicles. Traditional brands such as BMW, Harley-Davidson and Triumph were and still are proud of their experienced employees who put decorative lines on tanks with steady hands. The challenge is to emphasize the spatial contours: Skratch has to take into account the curvature of the room, in this case the helmet shell, in his freestyle lines. And always dunking in color – plus turning the helmet to be symmetrical to the left and right, without any templates. Such an exact brushwork is just amazing. Skratch can’t make a mistake, only has one try. But he’s sitting.

A real work of art was created after just 15 minutes. Wow! It is reminiscent of a tribal tattoo. Sure, Skratch already got tattoos. He has a good spatial sense and a feeling for shapes. Known how – according to his own statements, he learned to paint and line in the renowned company that was once founded by the Godfather of Pinstriping “Von Dutch” (Kenneth Howard, 1929–1992). The price for the work? About $ 100 an hour, 750 for a full day. “Some people think I’m a bit expensive,” says Skratch, “but I just work sensibly.”.

Skratch was born in Fort Worth, Texas in 1972. At 15 he got his knees as a skater and had his first tattoo. At 16 he learned to be a car mechanic. In 1993 he founded his own company and moved to California at the turn of the millennium.

When he sells a metal flake open face helmet that has been completely decorated by him on Facebook, he calls up a manageable $ 500. The American also sends to Europe.

You can not only experience Skratch in many YouTube videos, the liner is also frequently on the road at many trade fairs in Germany. He has already been to the Euro Bike in Friedrichshafen (because he also designs designs for bicycle helmets) and the Kustom Kulture Forever in Bottrop. Line in front of a large audience? Even then, the freak’s hand never shakes.