The French brand is finally changing its modular star

Concerning them, there is no doubt: it is immediately recognizable by its two red dewclaws raised on the skull and very often and not it is not a cliche, its users are generally recruited from the siblings of the owners of Tmax or roadsters a bit sporty like Z and company…. It must be said that this helmet had, in addition to a rather terrible look, an almost unique posture in the PCF (French helmet landscape) with its 180 ° pivoting chin bar and its double jet and full-face homologation.. True, the system was later copied by others, but Roof was the first; Bravo to this brand created by Claude Morin. 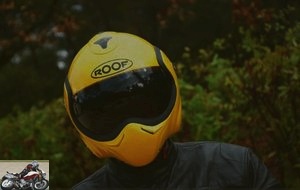 We laugh (not even, in fact), because Roof has managed to build a concrete identity and a great commercial success for the first generation of its helmets, the Boxer. In 1996, Roof obtains the trophy for the best commercial growth.

A lasting success: since 1995 (the first studies even date back to 1993), the Boxer has been content to evolve in detail, emphasizing colors and limited series rather than deep technical developments. So it was time to enter a new era. 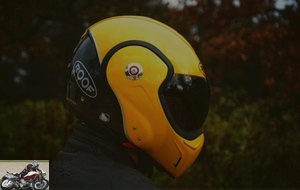 Carbon, but not only

Despite its indisputable family resemblance, this helmet is new with in particular changed dimensions, shorter, more slender: Roof has recently renewed its offer with the Boxxer (with two "x", please) and its shell. partially carbon; the shell is in fact made of an alloy of carbon and fiberglass and not just fiberglass as on the Boxer. 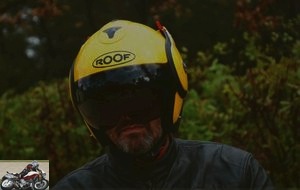 The BoXXer keeps its small ‘antennas’ in the open position

The main goal is to gain weight. At 1550 grams, the Boxxer Carbon is rather in the low range for a modular and it is even 100 grams lighter than the Boxer. It feels from the first grip, with a feeling of lightness considering the fact that it is a modular. We also appreciate the quality of construction and the beauty of the visible carbon fiber.

However, weight was not the only goal: Roof has done a good job of responding to some of the criticisms that had been leveled on its previous generations of helmets. On the other hand and unlike some modular helmets, you have to raise the chin bar to put it on. We then discover one of the advantages of carbon: its rigidity and it is true that the base of the helmet offers little flexibility. We got used to it … But it is true, then, that this rigid shell allows to enclose the skull and that the adaptable comfort cap makes it possible to adjust its cranial morphology to the helmet. 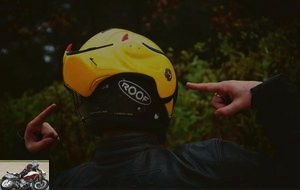 The chin bar is positioned behind

The click is life when you do press on the internet. But the click is also the sound you hear when the chin bar locks onto the helmet: a sharp noise, a frank movement, doubt is not allowed. Then, we adjust the notched chinstrap, fixed to the shell by four points.. 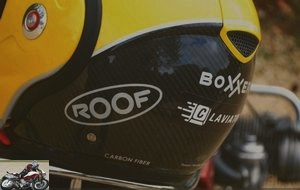 It doesn’t take long to ride to realize the immensity of the progress made by the Boxxer Carbon, if one keeps in mind the dynamic performance of previous Boxers. There, we can say that we are all the same in another world. Already, the screen is glued to the shell via a large silicone rubber seal, significantly thicker than the foam seal of previous models. Whether in terms of sound, on the side of wind protection (especially since a small bib effectively protects from the air at the chin guard) or even waterproofing in the rain, the Boxxer has done considerable progress and no longer face criticism today. There is, however, an identity trait of the family: a mini-space in front of the nose allows a very small stream of air to pass through, which did not bother me, but which may however disturb some.. 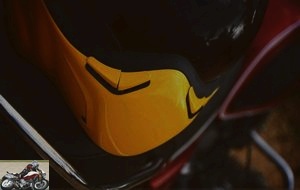 The chin bar also has its own openings

Suddenly, on the road, we are quickly seduced by its new qualities. Although curved, the screen offers a good field of vision without distortion on the base or on the sides. The Boxxer Carbon also seduces by its absence of turbulence and its good stability even at high speed and even at significantly more than the (next) 80 km / h regulations..

The ventilation is good (the 4 small buttons on the front face are however not easy to understand with gloves), the small air stream helps prevent fog on the road. But once in town, the air stream circulates less and mist may eventually appear.. 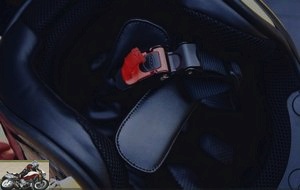 The closure is done by micrometric buckle

In fact, in town, we are tempted to take advantage of the double homologation and to raise the chin bar. To do this, simply activate, one by one, the two red triggers (so characteristic!) And located at the base of the helmet. The handling of the chin bar and screen, together or separately, is smoother than in the past. You can keep the screen without the chin guard and enjoy good wind protection at low speed, ideal in town, for example.. 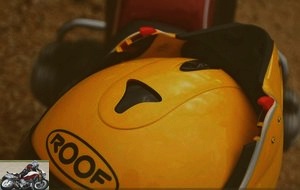 The ventilation of the Roof Boxxer Carbon

Finally, on the practical side, different screen tints are available (including a Daylight, where the tint varies according to the brightness); finally, we note the ease of disassembly of the chin bar (a small hexacave screw on each side), which requires an ad-hoc key and a few seconds of handling. 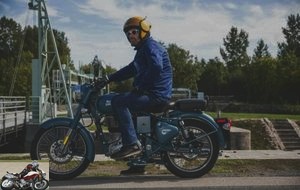 The X that changes everything

It is undeniable: in terms of build quality, comfort, soundproofing, waterproofing, the Boxxer is a considerable advance over the Boxer and all previous models. Its look as sharp as ever will appeal to fans of the genre, it’s obvious.

On the other hand, this qualitative increase is accompanied by a rising price: at 529 euros, we are in competition with premium brands which offer even more comfort. It is therefore on his look and his identity that he will make the difference, but it must be admitted that side bad-ass attitude, he does not fear anyone. ! 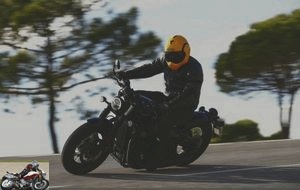