Born in Great Britain in the 1890s (and the offshoot of a weapons factory, hence the name of its models, Bullet), but Indian since the end of the 1940s, the firm Royal Enfield is today in full expansion. The Bullet Standard that we are presenting to you constitutes the entry model for a range also made up of the Classic (recognizable either by their two-tone livery where chrome is sometimes generously present, or in a “military” version in khaki or desert variation) as well as the Continental GT, more "sporty". Bullet Standard and Classic use an air-cooled long-stroke single-cylinder 4T developing 28 hp, while the Continental GT uses a 535 cc (and 29 hp) version from the same block..

Expansion, let’s say: the plant in Chennai (India) has grown from a capacity of 30,000 motorcycles per year to 30,000 per month, a factory and an R&D center in Great Britain are seriously under consideration, a new trail version (baptized Himalayan, with a mono of 410 cm3) as well as a vertical twin of 750 cm3 are in the boxes, the designer Pierre Terreblanche (author of the Ducati 999 and the first Multistrada) has been hired: in short, things are moving. In the meantime, the Bullet Standard is the cheapest way to access the myth: € 4,985, in black or English green. 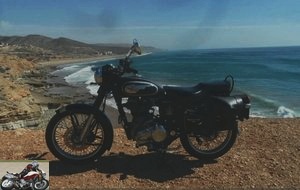 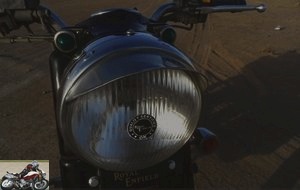 Depending on your appetite for the Great Motorcycle Encyclopedia, you will find the Bullet Standard irresistibly nice or terribly old-fashioned. Question of taste then. What is certain, however, is that Royal Enfield is having a nice turn of events. Doomed into oblivion by a reduced production of obsolete machines bought by nostalgic obsessives and DIY fanatics, Royal Enfield has rebounded by modernizing its machines in 2008 with the EFI generation equipped with an aluminum engine block and the electronic injection while knowing how to capitalize on the return to grace of vintage. Result and irony of fate: the Bullet Standard has become furiously trendy and has a real capital of sympathy. Yet it is extremely classic, but has succeeded thanks to a few details such as the enamelled plates on the tank decorated with hand-painted threads or the round rear light installed on a horizontal plate. However, the overall finish is just average and an Enfield still requires a bit of elbow grease to stay beautiful for a long time.. 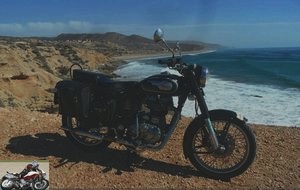 To speak of "personalization" would be a bit of an exaggeration, but few Royal Enfields remain fully original. The one we are showing you here differs from the original in its turn signals, sidelights, shorter exhaust silencer, side panniers and tires. Note, however, that the shape of the frame, the tank, the streaks of paint and the enameled plates are identical to those of the 1949 vintage. The injected aluminum engine, the front disc brake and the electric starter constitute the only visible modern touches.. 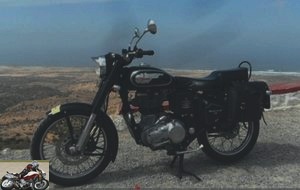 The Bullet Standard is a slim and compact motorcycle. And dense: with 187 kilograms dry, it is heavier than one might imagine at first glance. The good news is, his weight doesn’t really feel. The driving position is quite natural. Some "riders" will find the footrests set a bit too far forward, but you get used to it pretty quickly. The ergonomics of the current Bullet dating from the 40s, large riders may consider that the driving position is a little "picked up" over the hours of driving. 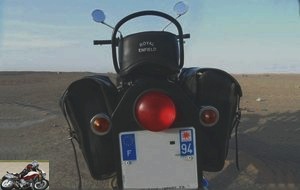 No coded key here: a simple lock is located on the steering column. The dashboard is rudimentary: a counter with three indicator lights, a secondary dial with a reserve indicator, an injection and engine malfunction indicator light. 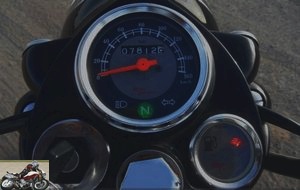 The injection warning light goes out after a few seconds, you can press the starter button and the Enfield instantly snorts. Finally, only if the operation is carried out on the central stand: the side acts as a circuit breaker.

When idling, the front wheel is seized with jerky tremors that foreshadow the engine character of the machine: there is life in there ! 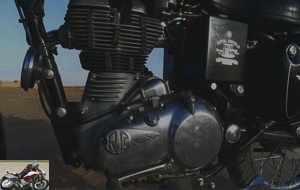 Compared to previous generations of Bullet with a frankly rustic cast-iron engine (front drum brake and right-hand gearbox) as well as Leanburns (a transitional series with low cast iron and high aluminum motor, electric starter and disc brake) , it must be recognized that EFIs have made immense progress in terms of handling. From now on, the gearbox is smooth and locks the gears properly; the controls respond precisely, the bike starts right off and keeps idling! We are not yet on the feeling of a Honda, but almost. The stems meet Japanese standards and despite electronic fuel injection, a choke control on the left stalk is useful for a few seconds during cold starts. If necessary, a kick has reappeared after having disappeared for a few vintages. Starting the Enfield with a hock, however, takes a little getting used to; once the experience has been acquired, it is not complicated. 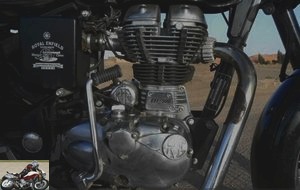 This is one of the Bullet’s areas of expression. Placed on tires narrower than those of number of 125 cm3, the Bullet reveals a demonic agility. Compared to the Classic models fitted on 18-inch wheels, the Bullet Standard is mounted in 19 ”: if we compare the two models directly, we see that the Standard model shows a very slight stiffness at the time of fall on the angle, but this is more of a character trait than a fault that hinders driving.

Narrow, the Bullet Standard weaves its way between cars with ease. The character of its long-stroke single-cylinder does not encourage you to pull the gears with each acceleration, but on the contrary to take advantage of its great flexibility which, in the original gear ratio, allows it to resume from 30 km / h in third or 50 km / h in fourth, to then wind on the torque. On your handlebars, you naturally adopt a peaceful and smooth ride, knowing that if necessary, the 4 m / kg of torque will be enough to get out of a bad patch.

Small bonus: the Bullet has a real capital of sympathy and is a device conducive to making a lot of conversations. Alas, more with bearded fifties than with girondes young girls. 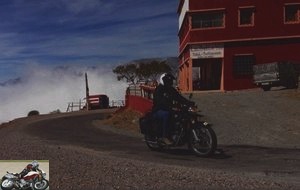 From a strictly legal point of view, the Royal Enfield Bullet Standard is authorized to use these traffic lanes. In fact, it will scrupulously respect the maximum authorized speed. 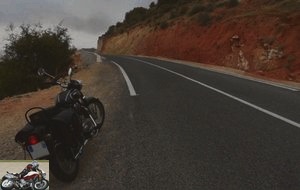 This is without a doubt the best place to enjoy a Bullet Standard. We thus find the essence of the sensations of the motorcycle as it was practiced in the 50s, the nose in the wind: a simple and torquey engine which backfires happily, a basic chassis but which gets the job done at a leisurely pace. The Bullet Standard is an ode to simplicity, the most beautiful incarnation of a practice of motorcycling without artifice. Authentic ? Yes…. and terribly attractive if you have the right mindset.

The Bullet are originally rigged with fairly short gear ratios: normal, in India, to hold 70 or 80 km / h on the motorway is a fine performance, rare! With us, on the other hand, we can have the feeling that they are "spinning" a bit. Difficult to be extremely precise for lack of tachometer, but let’s say that a Standard Bullet in stock reduction (with 17 teeth gearbox output pinion) has a cruising speed of 90 km / h; above, the machine begins to vibrate copiously and long-stroke monos do not like prolonged high revs, even if the machine can officially reach 130 km / h in full fury. We can therefore install a gearbox output pinion of 18 or even 19 teeth (but as the transmission is located on the right, the crankcase must be removed and drained), to gain a comfort zone of around ten km / h at each time, the engine torque being sufficient to digest this additional extension. Thus, the Bullet does not become a thunderbolt of war, but is more comfortable to overtake.

The chassis offers correct road behavior, in line with the performance of the machine. When you attack a little, the frame’s lack of rigidity quickly becomes apparent and the center stand scrapes off the corners, but at no point is the Bullet Standard unhealthy if you drive it according to its philosophy.. 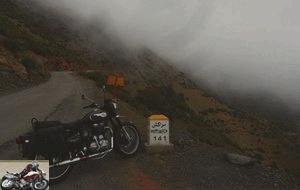 No overdoing here: the Bullet Standard (like the Classic, the Continental GT having a disc at the rear) uses a small disc brake 280 mm in diameter at the front, clamped by a small caliper with two pistons, as well as a 152mm rear drum brake. It may seem a bit puny.

But take a look at the owners forums (royalenfieldlesite.com/forum): While the grumpy are as numerous as the fanatics, no one is complaining about braking. It’s all a question of philosophy and the device is sufficient in view of the weight and performance. Not to mention the little extra of the single cylinder: its engine brake. 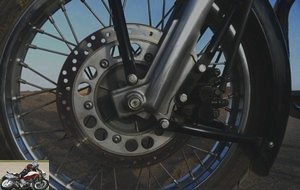 The Bullet isn’t exactly comfortable, but it isn’t uncomfortable either: the modest cruising speed won’t make you feel the need for a fairing or wind protection. The saddle has been better padded since the 2014 vintages. The rear dual shock absorber is pretty basic: however, as you anticipate a lot on the handlebars of an Enfield, you have time to avoid holes and bumps. The Standard is even the most comfortable of the three models (the Classic has an adaptable footstool for the passenger, which transmits more vibrations, while the Continental GT is more spartan): in short, we can consider trips of several hundred kilometers by small roads in duo without feeling any particular pain. 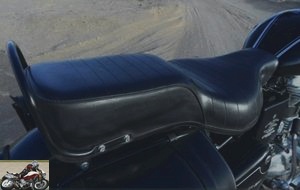 This is undoubtedly THE strong point of the machine: its sobriety is exemplary and it is probably the most fuel-efficient machine in all motorcycle production. The specimen that we are offering you for testing has a complete logbook covering more than 8,000 kilometers, where all the drinks have been recorded: the amplitude goes from 4.44 l / 100 (only Paris intra muros ) at 2.99 l / 100 (a little quiet ride on the coastal road in duo, between Essaouira and Agadir), with an average of 3.7 l / 100. As a duo, on departmental roads traveled at legal speed, you will consume between 3.2 and 3.5 l / 100. The 14.5 liters of the tank thus allow a range of approaching 400 kilometers..

Since we are talking about budget, know that the Bullet is also extremely frugal with consumables, tires, brakes and chain…. Even though it has to come to the shop for an overhaul every 6,000 kilometers and change its 2.75 liters of oil, the Bullet can boast of lower running costs. Valves, for example, are automatically adjusted using hydraulic valve lifters. 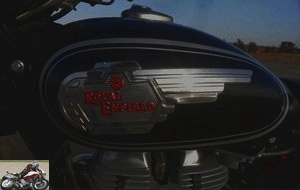 Originally, the Bullet Standard has few practicalities. The oil level is checked through a window on the crankcase, with the motorcycle placed on the power unit. A small side box, under the saddle, contains the tool kit and the center stand is original. It’s not much, but the Bullet can be easily accessed with side panniers, a luggage rack and a tank bag. In India, the Bullet transforms into a workhorse with side frames that allow it to carry jerry cans of gasoline and tens of kilos of luggage. 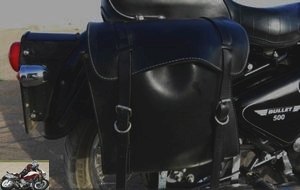 Obviously, the Royal Enfield Bullet Standard is a nice different way to ride. Faced with a Yamaha SR 400 at the ridiculous price and a somewhat artificial Mash 400 “Five Hundred”, the Royal Enfield Bullet Standard, modernized at a minimum, has kept its character traits by forgetting now to be temperamental and is sold at a price finally quite acceptable. Its style will appeal to nostalgic as well as ailments, its performance makes it ever more relevant in the era of "all repressive", its agility and its frugality make it a good switch while the progress made in terms of reliability makes it possible to consider a long-term relationship without too many gray areas. Admittedly, on its handlebars, you also have to know how to take the time to live. But isn’t time the most affordable of luxuries ?