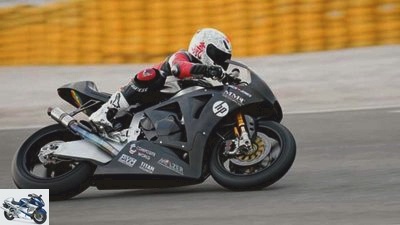 Just four months before the premiere of the new Moto2 World Championship class with 600 cm³ Honda standard engines, MOTORRAD was able to drive the only German machine in the field so far, the Kalex. The high-tech machine from Swabia showed that it has the very best equipment to turn the World Cup into a horror show for the opponents.

Only a good quarter of a year until the first Grand Prix and far and wide nothing to see of the engine for the new season. Catastrophe? No, only that, one might almost say “Normal state” for the 25 teams on the currently valid list of participants in the newly created Moto2 World Championship, the successor class to the previous 250cc.

The 600 cc in-line four-cylinder unit engine from Honda will only see the light of day during the official test drives on the Spanish GP circuit in Valencia on March 1, 2010, exactly six weeks before the start of the season in Qatar.

So the group of suspension providers in the new class, which has now grown to a dozen, had to make do with more or less standard Honda CBR 600 engines, which at least from the outside, but above all in the engine suspension points, are identical to the later racing unit.

The young German high-tech laboratory Kalex from the Swabian town of Bobingen decided in the development and test phase to use a Ten Kate Honda kit engine, as is also used in the Supersport World Championship. “We assume that the final racing engine will come relatively close to this unit”, Kalex co-owner Alex Baumgartel explains this choice.

There should be a bigger difference than the engine compared to the near-series Supersport machines in terms of driving behavior. On the one hand, because the Moto2 devices can weigh 135 kilograms, which the Kalex comes close to at 139 kilograms at an early stage of development, while a supersport racer has to carry at least 158 ​​kilograms. In addition, Moto2 machines like the Kalex are thoroughbred racing suspensions.

The first laps with the Swabian high-tech racer in Almeria, Spain, confirm the high expectations. For a completely new motorcycle with so few development kilometers – before the presentation and the first tests following the MotoGP final in Valencia at the beginning of November, the Kalex did not roll a meter – the black beauty can be turned with incredible, razor-sharp precision. This is all the more remarkable as various test riders from other new Moto2 projects often found turning-in behavior that was rather unwilling to turn and even chattering.

The praiseworthy driving behavior is achieved through what at first glance appears to be a rather unconventional overall conception of the chassis. The Kalex fathers Baumgartel and Milletkorn do not like to be looked at in the maps, but the comparatively massive front structure of the aluminum bridge frame is still recognizable, especially in the area between the steering head and the upper engine mounting point. With this, the designer Baumgartel obviously achieved an excellent balance between braking stability, steering behavior and feedback to the driver, in line with an equally idiosyncratic design of the front chassis geometry, which he doesn’t like to go into too much detail.

The Ohlins SGR 900 fork in connection with the TTX36 shock absorber from the same manufacturer is also part of the standard in the new WM class, as is the Brembo monobloc front brake. With the special Kalex chassis philosophy, they grow together to form an excellent symbiosis, so that brute braking maneuvers are easy to pull off your fingers.

The anti-hooping clutch, piquantly from the production of the Swiss Eskil Suter, who will compete with Kalex in the world championship with its own Moto2 chassis, was available for the first time under serious test conditions in Almeria and immediately fitted in perfectly with the Kalex – Complete package. Above all, it ensures a pleasant calm before the bend on the hitherto rather restless hindquarters.

According to the Kalex basic idea, the rear swing arm, which can be adjusted in the pivot point, is rather massive, which of course is beneficial to the stability of the vehicle.

A special feature in the area of ​​the swing arm arose from the Kalex striving to minimize any tolerances. Crucial parts of the strut deflection are made of titanium, which expands very little at high temperatures. This enables the Kalex developers to ensure that the driving behavior remains largely constant in hot racing conditions.

All of this also helps the ambitious hobby racer driver to reproduce lap times at their personal limit in regular succession with otherwise not taken for granted precision. Within a very short time, the pilot feels at home on the completely new device and the work goes off with extraordinary ease. Although the Kalex is designed as an uncompromising sprint racer, the test driver with noteworthy experience in endurance racing finds himself wishing to tackle opponents in the endurance world with such a device.

The fact that the Kalex Moto2 leaves a fairly well thought-out impression overall is rather astonishing given the fact that the two engineers Baumgartel and Hirsekorn had only put one single motorcycle on its wheels before: 2007 the Kalex AV1, powered by a 1000 cm3 Rotax -Twin from the Aprilia RSV mille works. However, they acquired their basic knowledge through years of work in automobile sport, for example in the Opel Calibra DTM project and or with the VW desert rally troop.

“In my private life, Klaus and I as a motocrosser were always motorcycle freaks in national series racing”, explains Alex Baumgartel. Obviously, the two Kalex founders’ affinity for motorcycles was enough to avoid mistakes that were not infrequently revealed in the recent past when highly decorated and experienced automotive technicians tried their hand at the driving dynamics of a motorized two-wheeler and were unsuccessful.

However, the experience of the Kalex duo in matters of carbon fiber processing, which comes from the four-wheeler sector, has a very positive effect. All of the carbon parts on the motorcycle, from the self-supporting rear frame to the tank cover and wheel covers to the airbox duct, weigh just 3.5 kilograms.

The second serve from Bobingen really has what it takes to give even the more established competitors in the new Moto2 world one or two moments of horror.