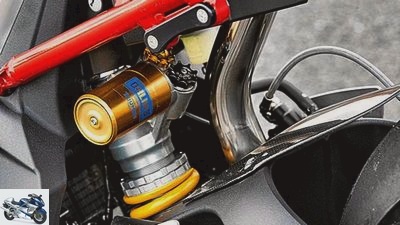 The suspension fits perfectly, the fork works great thanks to great setups. High time to take care of the shock absorber.

Curtain up for part 3 of the chassis special. 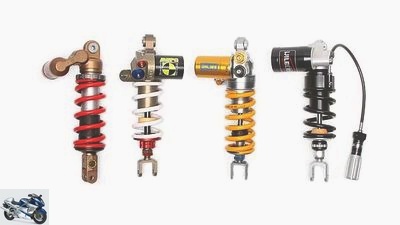 Damn it, the box wobbles like a lamb’s tail! When you accelerate out of the corners, the rear pumps like crazy and the bike almost throws you off. And on top of that, the thing almost breaks your back when boarding over bumps, comfort is zero. What’s wrong? Clear case: lousy shock absorber setup. The problem sounds like too much compression and too little rebound. Pressure level? Rebound? There was something…

Right, like the fork (PS 1/2012), the shock absorber also has damping that regulates the compression and rebound movements. In almost all suspension struts – also called monoshock – it works hydraulically with oil. Without cushioning, the bike would jump like a rodeo horse on ecstasy. As a reminder: The compression stage dampens the compression movement, the rebound stage the rebound. Optimally coordinated, the shock absorber delivers a lot of grip and a high level of comfort at the same time.

But one after anonther. Step one: -Setup the rebound. Even non-professionals quickly develop a feeling at what speed the shock absorber should ideally rebound. To do this, put the bike on both wheels, a helper keeps it balanced from the front. Standing behind the machine, you now push hard on the stern. Be careful with racing bikes: the combination of a short rear frame and wafer-thin accessory humps can easily break. Tip: remove the racing hump and press it directly onto the rear frame.

The rebound works perfectly when the tail returns to its starting position after just under a second. The best way to do this is to count: “Twenty-one” – before the last syllable (“zig”) the shock absorber should be in its original position again. Pure racing bikes require less time, as the shock absorber usually does not compress as much as on road bikes.

If the bike rebounds too quickly, the rebound damping is too weak. As a result, the rear sways strongly when driving over bumps and in extreme cases leads a lot of unrest into the chassis. If, on the other hand, the shock absorber takes too long to rebound, it may remain in a highly compressed position and no longer adequately absorb several successive bumps. Depending on the quality of the road, the nasty chassis unrest can also be generated. In addition, the machine travels wide lines in curves because the geometry changes direction, which is unwieldy.

Before making changes to the setup, you should always note the current values. If in doubt, simply return to the original vote. To determine the values, carefully close the corresponding adjuster and count the clicks or revolutions. With common dampers, the adjustment device for the rebound stage is located below the spring near the screw connection with the rocker arm / deflection. Exceptions: see box on page 74. As for the first two parts of this chassis special, a video on www.ps-online.de supports the tuning of the machine.

Usually only upper middle class bikes have a pressure level adjustment. Suspension struts where the high- and low-speed compression levels can be adjusted are even rarer. This is the compression speed of the shock absorber, more precisely: the damper rod and piston. The bike slowly compresses on gentle, flat bumps, only the low-speed damping is used. This is different with hard edges and deep, steeply sloping and rising furrows. There are very high forces that force the oil through a kind of pressure relief valve – the high-speed damping. 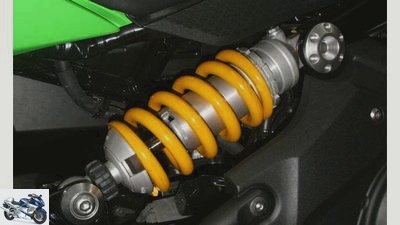 If the shock absorber only has a single compression adjuster, it is a combination of low and high-speed ranges. It takes a little experience to fine-tune the pressure level. Because unlike the rebound stage, there is no benchmark that you can use as a guide. However, if the tail sinks relatively easily and far in spite of the correct spring and strong, fast pushing, the pressure level is too slack. It is important to press quickly, as the damping increases with increasing compression and rebound speed and can only be assessed in this way. If the shock absorber hardly yields despite the high expenditure of force and the oil at operating temperature, this indicates that the damping is too tight. Tip: attach a small cable tie to the damper rod, slide it up and test drive it on an uneven road. The closer the cable tie comes to the lower stop buffer, the weaker the attenuation. Even with comfortable coordination, there should be at least a few millimeters between the cable tie and the buffer. The general rule is: when burning on the country road, select a little less damping for greater comfort, tighten the pressure level when spinning on the slopes. That brings grip and stability. A relatively wide closed high-speed pressure stage also contributes to this. On the other hand, experience has shown that it should be quite wide – often completely – open on the country road. The adjustment device for the pressure level is always located on the expansion tank.

A good way to find the perfect setup is to test extreme settings. Means: First close the damping completely and drive (carefully). Then open it completely and test again. In this way, you feel your way step by step to find the optimal setting. Important: Always adjust only one type of damping (compression or rebound). Only when one type of cushioning fits does the other come into play. With this method, an unstable lamb’s tail can be transformed into a powerful burner in no time at all. Guaranteed! 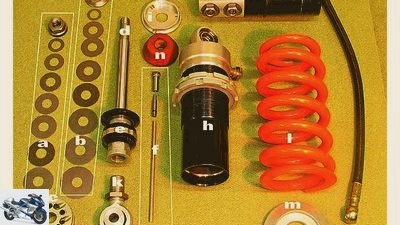 Structure of an adjustable shock absorber.

The shims (also: plate valves or damper plates) of the rebound stage a and pressure level b are at the top or bottom of the damper piston c screwed. This sits on the damper rod d, the rebound adjustment on the lower part e is housed. The mechanics of the rebound stage f runs in the hollow bored damper rod. Below the damper piston there is also a piston-like structure G housed, which for guidance and sealing in the damper cylinder H serves. The cap i forms the lower end of the damper cylinder. High-quality struts have a height adjustment k. Its fastening eye is screwed to the rocker arm or the deflection. The spring works outside the damper cylinder l. The spring plate m serves as the lower seat. A rubber stop n prevents the damper cylinder from hitting the spring plate hard in the event of strong compression movements. Outside on the expansion tank O is the setting for the pressure level. During compression, the container absorbs the oil displaced by the damper rod, and during rebound it releases it again. Pressurized gas (usually nitrogen) ensures that there is enough oil around the damper piston even during rebound. In addition, the gas pressure prevents the oil from foaming and mixing with air – this would have a massive impact on the damping force. A separating piston runs between the oil and gas. 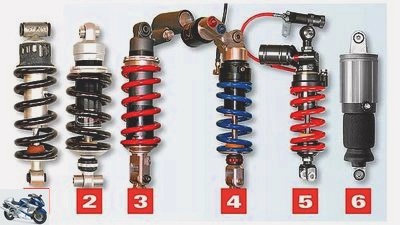 From very simple designs to luxury parts: the shock absorber market offers the right type for every budget and requirement. Shock absorbers  1  is a very simple example without adjustment for the damping. As a large-scale product, these types of parts are mainly used in lower-middle-class bikes.  2  The next monoshock comes from the aftermarket and at least has a rebound adjustment. In all common suspension struts, it is located at the bottom near the screw connection to the swing arm or deflection.  3  The next damper is again a mass-produced part, this time of the upper class with adjustment options for rebound and compression. Good to see: the expansion tank usually forms a unit with the damper housing. The adjustment mechanism for the pressure level is generally located on or near this expansion tank.  4th  This photo shows an accessory damper with all the pipapo: hydraulic spring preload, rebound stage and separate adjusters for the low and high-speed compression stage.  5  This shock absorber represents the most modern technology: The monoshock is constructed according to the so-called two-tube system. How it works and what advantages the system offers can be found in the box on the next page.  6th  This shock absorber is a real exotic. No feather, no oil, nothing. The suspension as well as the complete damping works pneumatically. BMW built the part into the HP2 sports enduro in 2005, but the air suspension strut could not prevail. In general, the following applies to adjustable spring elements: For setup tips, first close the adjusters completely and then open them by the specified value. 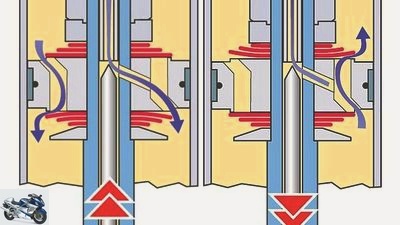 How it works during compression and rebound.

With conventional struts, the rebound and compression stages are located on the damper piston. During compression (left drawing), the oil (yellow) in the damper cylinder flows almost unhindered past the rebound stage (above). With slow compression movements, the fluid only flows through various bores in the damper piston. Faster compression means higher hydraulic pressure, as a result of which the oil bends the shims (red) to a greater or lesser extent depending on the load and flows past them. When rebounding (right drawing) it is exactly the opposite: there the oil passes the pressure stage with almost no resistance.

Depending on the rebound speed, it either only flows through the bores in the piston or also past the rebound shims. A needle valve (gray) runs exactly in the center of the piston as a rebound adjustment, which varies the opening of the bore and thereby controls the flow rate. Adjusting the rebound stage always affects the compression stage a little, as the oil also flows through the central piston bore during compression. Since the rebound stage has to counteract the enormous force of a compressed spring, it is designed to be much tighter than the compression stage, the function of which is supported by the spring. Because the viscosity (flowability) of the oil is temperature-dependent, oil with a very low viscosity is usually used in suspension struts: SAE 2.5 to a maximum of SAE 5.0. This ensures that the flow properties of the oil remain fairly stable even at high temperatures. 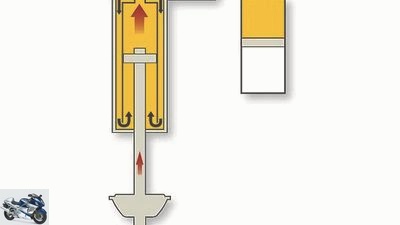 It has been around on the aftermarket for a long time, as the only production bike used
the brand new Honda Fireblade is a twin-tube shock absorber. In contrast to conventional copies, the damper piston houses neither rebound nor compression. Rather, the completely impermeable part pumps the oil either through the inner pipe (compression) or between the inner and outer pipe (rebound) towards the rebound and compression stage valve. Advantages: completely separate rebound and compression circuits. In addition, a twin-tube damper requires less gas pressure because, in contrast to conventional designs, there is no turbulence on the damper piston. A lower gas pressure (around six to eight instead of ten to twelve bar) improves the response behavior. Chassis technicians are also pleased that they don’t have to completely dismantle the shock absorber to access the rebound and compression valves – both are located on the outside near the expansion tank and are easy to dismantle. Possible disadvantages of twin-tube dampers: mostly very small rebound and compression valves. This makes it harder to control the flow rate of the oil, which makes tuning difficult. In addition, they do not have an extra adjuster for the high-speed pressure level.