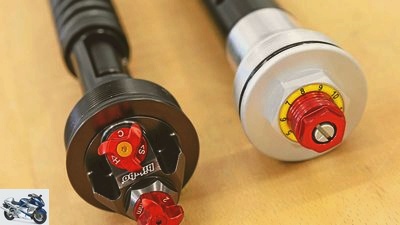 Suspension special: fork tuning
What are the real benefits of chassis tuning for a motorcycle??

who binds himself forever! Is it worth investing in different or revised spring elements? Or you can save yourself the hard earned bills?

Using the example of a BMW S 1000 RR, we show what chassis tuning really brings. 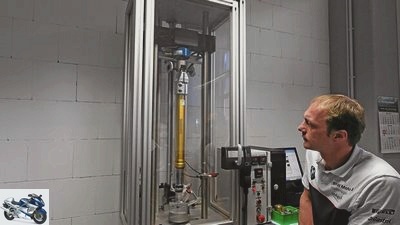 The test bench is running at full speed. First, the high-tech system, which costs 50,000 euros, heats the oil in the clamped fork leg to working temperature by means of rapid lifting movements. If a sensor detects the desired 25 degrees, phase two of the sophisticated program follows. In a fixed sequence, the handlebar springs in and out at different speeds over several minutes. At the end, the connected computer draws a curve that provides information about the quality of the damping work: How much damping does the fork build up at which compression and rebound speed? How even is it? It remains stable?

We are visiting Alpha Racing. The company in Stephanskirchen, Bavaria, is responsible for BMW’s works outings in the Superbike World Championship and the International German Motorcycle Championship (IDM). Chassis specialist Sergio Sickau repeats the process on the test bench until the diagram shows many colored lines. Each one stands for a different setup. Then he clamps another fork leg in the device and the procedure begins all over again. The point of the exercise is the comparison between a completely standard fork and a revised fork with different innards. Well worth a renovation? 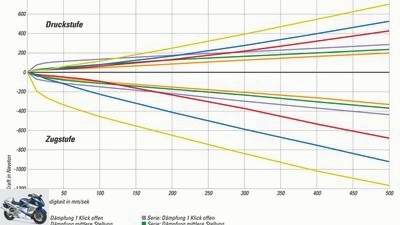 The diagram shows the force curve of the damping of a standard fork compared to a converted part. Each color stands for a damping that is open to a different extent. Clear to see: The adjustment range of the Bitubo fork is much wider, the damping is tighter overall. You don’t need that much rebound reserve even on the racetrack.

A question to which there is no general answer. That depends on the requirements of the pilot and the machine. Most athletes from the upper middle class work very decent spring elements, the adjustment range of which is fully sufficient, especially for filing on the country road. It looks a little different with the racetrack bolts – this is where many forks and struts reach their limits. In addition, insensitive responsiveness and high breakout forces often leave something to be desired here and there. Topics that call the aftermarket into action. With modifications to the standard parts or completely new hardware, numerous providers promise significant improvements for most popular bikes. A broad field that cannot be completely plowed here due to its sheer size. As an example, we are therefore taking a closer look at Bitubo spring elements for this test. A 2011 BMW S 1000 RR serves as the test vehicle. At this point it should be mentioned that such tests basically represent a snapshot and do not necessarily allow conclusions to be drawn about the quality of other products from a manufacturer.

In the meantime, Sergio has freed the second fork leg from its anchoring in the test bench and presents both test subjects disassembled into their individual parts. Interesting: Bitubo works with a completely closed, gas pressure-assisted cartridge system (type: ECH29, around 1500 euros). According to the manufacturer, the main advantages are the even and reliable build-up of damping from the first millimeter of travel. Bitubo also promises a further setting range. In addition, unlike the original, the cartridge has two separate oil reservoirs: One determines the size of the air cushion, the other takes on the damping work. Advantage: No abrasion, for example from the spring, collects in the damper oil. This means that the oil stays fresh longer.

With so much high-tech, the original fork can’t keep up. A cartridge system is also at work here. However, as with all mass-produced forks, it is neither closed nor gas pressure-assisted, nor does it have separate oil circuits. In theory, the accessory has advantages. This is also supported by the damping diagram. What the test bench does not reveal in our tests, however, is the response behavior. To optimize it, Sergio digs deep into his bag of tricks and modifies sealing rings (Simmerrings), dust caps and sliding bushings. In addition, the technician applies expensive special grease to the inner tubes of the fork. A driving test will show whether and what the conversion actually brings compared to a standard fork. But first, let’s check the BMW series spring strut compared to an accessory part: What are the differences in terms of structure, equipment, and damping? The answers can be found in the next part.