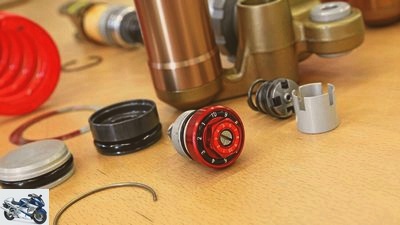 Suspension special: strut tuning
What good is the conversion of the shock absorber?

If you want to give the undercarriage a boost, you can use spring elements from the accessories trade. What is the point of retrofitting?

In the test, the series strut of a BMW S 1000 RR and a retrofit product. 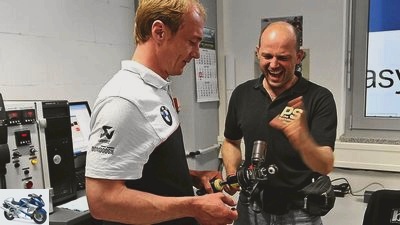 Ouch hot! In order to measure the evenness of the damping process, the suspension struts were subjected to tests with oil at different temperatures.

Ouch, paws burned! The reservoir of the shock absorber is really hot. Fresh from the damping test bench, the oil in it seems to be boiling. “The damper oil is 70 degrees,” explains Sergio Sickau, suspension expert at the Bavarian racing team Alpha Racing. “Normally, however, a road damper on the racetrack does not get up to these high temperatures.”

Then why the measurement? It is part of various test bench tests that are intended to illustrate the differences between a standard shock absorber and a counterpart from the after-market using the example of a BMW S 1000 RR. The first attempt shows how resilient the candidates are. To do this, each monoshock has to endure two runs with different oil temperatures (20 and 70 degrees). With each of these runs, the computer draws a colored line, the damping characteristic. Logically, these lines do not coincide with hot and lukewarm oil, since the hot juice naturally has better flow properties, which means that it flows more easily through the steaming valves and builds up less steaming than lukewarm sauce. In the ideal case, the lines rise slowly but steadily and run absolutely parallel – that stands for an even build-up of attenuation. 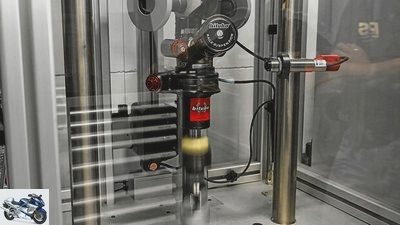 The test bench usually determines the damping values ​​for the spring elements without springs.

Unfortunately, they don’t quite do that with the original monoshock. This means that the damping of the standard shock absorber increases somewhat unevenly with changing oil temperatures, which can affect the driving behavior. It looks much better with the accessory damper. Its lines run almost parallel, so the damping builds up very homogeneously. The diagrams at the end of the article illustrate the differences.

Another diagram illustrates the damping curve of the two suspension struts when the compression and rebound stages are completely open and closed. This time the technician measures the oil temperature at a constant 45 degrees. An empirical value that, according to Sickau, applies equally to country roads and racetracks and differs from that of the fork (25 degrees, see previous PS edition). The reason is the poorer heat dissipation in the shock absorber, as it is not in the airstream and is also closer to the exhaust.

These measurements also show a similar picture: somewhat uneven damping in the original, homogeneous structure in the accessory counterpart. It is also noticeable that the rebound stage damping on the series shock absorber is much tighter than that of its counterpart. Usually it’s the other way around. A detailed test drive at a later date will show what all this means in practice. But that much is already clear: even for hard plowing on country roads, the standard spring elements are fully sufficient. Even occasional trips to the racetrack (hobby area) easily put away the original parts. A change is particularly interesting for people who want to polish the last tenths of a second on the race. However, a modification of the original damper can also contribute to this. Although it was not designed for opening and reclosing, specialists adapt it to the intended use and the requirements of the driver. Advantage: Modifications to the standard monoshock are much cheaper than a new part from the accessories. 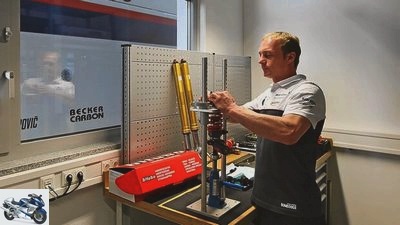 A special device helps to dismantle the suspension spring.

In our example – (Bitubo, type XXF 31 V2), this has resealable end caps for the damper cylinder and expansion tank as well as damping valves for the compression and rebound stages that can be dismantled in no time at all. There is also a height adjustment and the damper rod is exchangeable. This also makes it clear that high-quality accessory products are much more elaborately manufactured than most original monoshocks. This of course has its price. The after-market damper costs 1287 euros. For comparison: the BMW original is already available for around 900 euros. 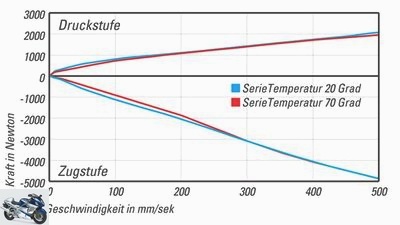 The diagrams show the damping behavior at different oil temperatures (20 and 70 degrees):

In the ideal case, the characteristics run parallel. They don’t quite do that with the standard strut. Good to see in the rebound. This means a slightly uneven build-up of damping, which can affect the driving behavior. 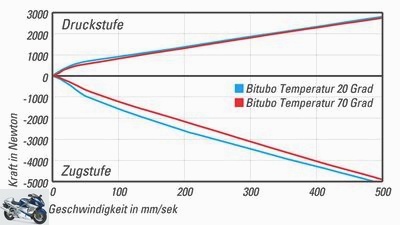 With the accessory shock absorber, the damping is more harmonious. 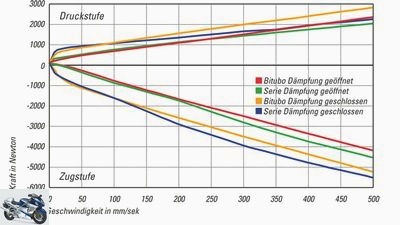 Attenuation curve with open and closed cushioning of the two test subjects.

This graphic illustrates the attenuation curve for the two test subjects when the cushions are open and closed. Also easy to see here: The lines in the after-market part are almost parallel, which means that the damping is uniform.