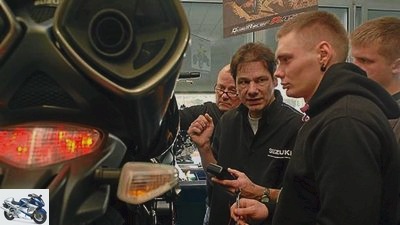 Suzuki Dealer Training – The Customer? who is this?

Suzuki dealer training
The customer? who is this?

After a mixed result in the MOTORRAD workshop test, Suzuki has changed its dealer training. Mechanics are now also scrutinizing how to deal with the king of the customer.

The separation of contact persons at the front and mechanics in the workshop no longer works today”, Norbert Koch is certain of that. This was shown, among other things, by the workshop test carried out jointly by MOTORRAD and ADAC in 2010, says Koch, who, as a trained two-wheel mechanic, has been organizing and directing the internal dealer training at Suzuki in Bensheim, Hesse, for ten years. Because customer needs and service standards in the motorcycle industry are different today than they were 20 years ago, workshop staff must also learn how to deal with customers, and conversely, the employees at the front of the customer counter must have more than just an idea of ​​modern motorcycle technology.

“To be served as required in the MOTORRAD test (including acceptance of a dialogue on the motorcycle and a written order confirmation, editor) is today’s zeitgeist”, says Koch. The test results, Suzuki General Service Manager Uwe Kroschel announced in a statement after the publication, “will have a major impact on our upcoming winter training season 2010/2011”. And Suzuki actually responded. “Based on the test results, we have combined the previously separate courses on the topic of dialog acceptance and service to form the new customer service course”, explains trainer Koch. The two-day course with around 15 participants each took place five times this winter. Participation is free for all Suzuki dealers and their employees.

The audience on a sunny February morning in the “Motorcycle training room” at Suzuki: from the 18-year-old mechanic trainee from Saxony, whom his boss sent to school on the first day of work, to a dealer from Budenheim near Mainz, to the trained mechanic from Berlin, who looks back on several years of professional experience . From the one-man business to the employee from the motorcycle adventure world with 30 employees, everything is included. Accordingly, Koch stretches out far, trying to make it clear with gestures and pictures why each of the following six points is so incredibly important: 1. Direct acceptance, 2. Enter order and pass it on to the customer in writing, 3. Carry out customer service according to the maintenance plan, 4. Test drive of at least five kilometers, 5. Explain and hand over the maintenance plan, 6. Explain the invoice. Suzuki believes these steps are so important that every dealer has been urged to follow them. “We don’t want to boggle you as a retailer, we want to help you”, says Koch and immediately tries to refute the classic counter-arguments or excuses. “No time for all of that? Doesn’t count as this time is extremely well invested.” Only satisfied customers come back. So that it is so, “the customer should know what he is getting and what he is paying for.” For example, that the test drive is not fun, but rather “an essential service” is. Cook: “If, as a mechanic, I get off the car after the test drive and say the motorcycle is okay, then that’s the way it is. And that’s a good feeling for the customer that needs to be conveyed to him. Rattling is part of the craft.”

On the second day there is no more rattling, but screwing, it is about technical details and special features of individual Suzuki models. Here are the mechanics in their world, but the service staff has the chance to learn new things. Because both, as Koch’s course concept boils down to, should be able to do everything. “The dealer-customer relationship for motorcycles is different from that in the automotive sector”, he admits. “But the performance has to be the same, actually even better.” Can that work? The next workshop test will show.