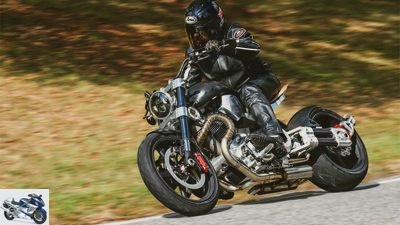 Designer Pierre Terblanche’s guest appearance at the American custom bike manufacturer Confederate was short-lived, but during this time he put his own stamp on the Hellcat X132 Speedster.

The man is legendary when it comes to motorcycle design. And a real globetrotter. Pierre Terblanche has not only styled icons like the Ducati Supermono. He also designed the first Ducati Multistrada, Hypermotard and MH900e. Likewise the controversially discussed 999 or the Sport Classic Ducatis, which are coveted today, but which did not really hit the market in 2003. After holding positions at Piaggio, Moto Guzzi and Norton, he joined the USA in 2013 Confederate Motor on. And only three months after his debut Hellcat was presented in August 2014, he is already on his way again to lead product development at Royal Enfield. The revised Hellcat X132 is a legacy and farewell gift to the American motorcycle manufacturer from the southern states.

Founded a good 20 years ago by lawyer Matt Chambers in 1994, Confederate weathered the economic crisis thanks to far-sighted planning. Even more: Confederate plans to grow. The Hellcat is just the beginning. The 132 cubic inches (2163 cm³) so-called X-wedge motor from S&S is supposed to fuel the entire model range. The engine, equipped with a square bore-to-stroke ratio and forged Mahle pistons, owes its name to the wedge-shaped combustion chambers. The air / oil-cooled bumper motor with three camshafts, which it confidently displays behind a plexiglass cover, and the atypical cylinder angle of 56.25 degrees does a little less than in the original Hellcat introduced two years ago. 121 HP and 190 Nm instead of 135 HP and 206 Nm are really no reason to be sad. The current emission regulations are taking their toll, and even so, the fat twin should make the driver’s arms long with a brutal punch at the exit of a curve. That has to be experienced. So swing your leg over the leather saddle and get on.

One step further than its predecessor

Terblanche has positioned its feet a full 460 mm further forward with its own radicalism, and the pilot now sits a lot lower in the astonishingly comfortable saddle than on the previous model (724 by 762 mm). The whole motorcycle looks stocky and deep. That may be okay on endless highways, but in order to move the Speedster on winding terrain in such a way that it lives up to its name, there is no contact with the bike because the knees don’t put any pressure on the flanks when the legs are stretched far forward of the carbon tank. Perhaps Matt Chambers should consider offering both seating positions to choose from.

Igniting the twin takes a little patience. But no later than the second or third attempt, the V2 bursts into life with a full, pumping rhythm. With a calming 900 revolutions, it pulsates to itself while standing, almost free of the clacking and shaking of other American air-cooled V-Twins. And his voice is surprisingly muffled too. The whole machine looks a step further than its predecessor, more coherent and better processed. It seems as if Terblanche was successful in raising the whole thing to a higher quality level, because the Hellcat no longer looks like a mere collection of parts, but more homogeneous, refined, as if from a single source.

Despite the fact that S&S closed by a vibration-reducing balance shaft and the engine is rigidly bolted to the frame, it works incredibly smoothly by American V-twin ratios. In any case, one looks in vain for excessive vibrations over the entire speed range.

Despite all its strengths, Confederate looks mixed

Already just above idle you are torn away by the tremendous surge of torque, which already reaches its peak at 2000 rpm and hardly subsides up to the limiter at 5800 rpm. The motor’s comfort range is between 1500 and 3500 revolutions. Exploiting the speed of up to 5800 rpm would therefore be nonsensical; Shifting at 4000 rpm is perfect.
This is a great way to surf the torrent, and you have to watch your speed as hell, because 3000 rpm means 160 things in fifth and last gear – and they are darned fast. Among the US V-Twins, the Hellcat is extremely sociable, civilized and reserved – but only until you exhaust its enormous power reserves.

The hydraulic clutch, which is surprisingly smooth-running in view of the juicy torque, only rarely has to be tried, even when it is a matter of powering up from little more than walking pace out of the tightest turns. The speed should not fall below 1800 rpm and the curve should be circled under tension.
Sure, all of this can be expected from such a massive twin, and the Hellcat fully lives up to those expectations. But the fact that this is done with so much fine-tuning and such low vibrations deserves special mention. The engine package is simply impressive, even slightly lower performance values ​​do not change that. But the Hellcat does not convey the same close contact with the bike as its predecessor did and which it takes to chase it through the corners with confidence. The big 240/40 rear tire, which spans the now 18-inch BST carbon wheel and replaces the previous 190-17-inch model, or the 25 mm stretched wheelbase, is less important. You feel a bit decoupled from the new seating position. Even if the lean angle is more than sufficient and the Beringer brakes, which are equipped with monoblock calipers, grip relentlessly. In the end, the Confederate appears mixed – despite all its strengths.

It has increased significantly in terms of workmanship and finish and is now a few levels higher in quality. The S&S-Twin runs quieter and more cultivated than ever before, although not quite as muscular and massive. But it has always been the attraction of the Confederates that they were brushed against the mainstream and different from what is commonly expected of US cruisers. And that included the original seating position of the Speedster, which made them an extravagant reinterpretation of the term cafe racer. Together with all the existing improvements, it would make the perfect cafe cruiser. And an exclusive one too. Because, according to Matt Chambers, only 65 pieces are to be built by hand to order.