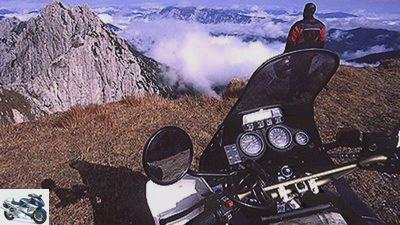 The Alps in focus: around the Triglav

The Alps in focus: around the Triglav
Triglav tour

Slovenia marks the southeasternmost outpost of the Alpine arc. Josef Seitz took a close look at the centerpiece, the Triglav National Park. And discovered great motorcycle routes and a remarkable piece of alpine culture.

The Alps in focus: around the Triglav
Triglav tour

Info – All around the Triglav mountain in the Alps

The Triglav National Park
spans almost the entire part of the Alps in Slovenia and offers landscapes and
High-end passes.

D stay overnight
There is a wide range of beds throughout the national park. Especially the proportion of
private rooms and apartments for self-catering has increased significantly in recent years. In the Socatal, in the small villages by Lake Bohinjsko, and in Kranjska Gora on the north side of the Vr ?? ic pass, there are many places to stay. Nevertheless, it can get tight in the high season from the beginning of July to the end of August. The prices for private rooms with breakfast are converted around 20 euros per person, apartments cost a little more depending on the equipment and occupancy. in the
Socatal, on the driveway to the Vr ?? ic pass and on Bohinjsko lake, a number of campsites are also open in the summer months. At the Vr ?? ic pass, you can spend the night in the large Ticjarev Dom mountain hut on the pass crossing.
D catering
Places to eat are called Gostílna or Gostí ?? ce. Their prices have increased with the increase in the
Tourism has increased in recent years-
moved, but are still on low
Level. The best beer in the country is called Lasko. Wine lovers should inquire about the white wines from the Jeruzalem area.
D worth seeing
First of all, the landscape in the national park
in all facets. Among them especially those
Vintgar Gorge near Spodnie Gorje and the Tolminka Gorge near Tolmin. The War Museum in Kobarid provides information about the war events in the First World War on the mountains around the Socatal. The Trenta house in Trenta in the upper Socatal brings you closer to nature in the national park through a multi-vision show in an interesting way ?? for example
the creation of the spectacular gorges through the millennia of grinding the water. It also provides information about the settlement and the way of life
in the area.
D activities
White water enthusiasts will get their money’s worth on the breathtakingly green Soca and its tributaries. Rafting tours can be booked in and around Bovec,
Kayak fans should turn to German canoe schools,