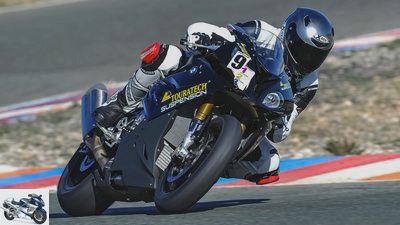 Touratech is researching a technical solution to eliminate the dreaded fork chattering on racing and street motorcycles. PS was allowed to test a prototype of the FSAD technology on a BMW S 1000 RR in Almería.

We met Stefan Nebel and Lars Wurdemann on the race track in Almeria. The two took care of the PS-TunerGP 2016 with the Touratech-BMW S 1000 RR for the fastest superbike. But this time the ex-IDM superbike champion Nebel climbed a Panigale while Lars Wurdemann reported on the test work. The Touratech suspension team is developing a completely new fork, “with an integrated FSAD”, says Wurdemann. FSAD? “Frequency Sensitive Active Damper,” he explains. The aim is to remove the compromise solution for the unsprung and sprung masses from the fork, so that it only has to take care of the chassis movement together with the shock absorber. A second system, the FSAD, takes over the wheel movement and works actively against unsprung mass movements. To put it more simply: the contact area of ​​the tire should always remain the same in all driving situations.

Background: Until now, the tire’s own damping properties were largely at the mercy of it. For example, if you storm over a short bump, the tire itself works in addition to the chassis. The carcass is compressed on the bump, but then quickly rebounds. This phenomenon repeats itself in decreasing strength until the carcass has “kicked out”. The same thing happens on the brakes and with other load changes in the motorcycle. Unfortunately, this effect has the disadvantage that the motorcycle doesn’t feel particularly good, especially at the limit, or that the dreaded chattering occurs, a high-frequency rattle in the fork.

So far, so good, but how can this be dealt with? To do this, the team gave us a BMW, to which the FSAD – two black metal tubes – was attached separately to both fork legs (looks like a gas pressure damped fork), and let us do a few laps. Not only the Touratech chassis made a very good impression. Somehow the fork just felt “crisp”, especially compared to our production BMW. After a short pit stop, Wurdemann removed the FSAD parts and we made more laps.

A weight works against the spring movement

Now it became obvious that the front felt less precise, at least in nuances, and cost trust. Especially in a left turn, around the apex of which the otherwise impeccable route had an asphalt patch, the front tipped away to the side. And also at the end of the long straight with the violent uphill brakes and the immediately following narrow right, this fine feeling of before whistled.

Eric Lindemann, who has the FSAD as mastermind with his company Tractive Suspension Touratech then briefly explains how it works. He doesn’t want to reveal any details, as the whole patent process is still ongoing, but in principle a moving weight in the metal housing always works against the spring movement of the tire. This creates huge forces (Newton’s law), which apparently works.

Since modern forks now accommodate the damping in a spar, the FSAD is to be placed in the free spar in the future, and this is exactly what Lindemann, Nebel and Wurdemann are working on with the Panigale. The system would be even better that way, since the damping axis is then exactly the same in both systems. Can we drive the Ducati? “Not yet,” laughs the troop. But it should be ready for use by TunerGP in May. “And you’ll be amazed on the bumpy surface in Lusatia,” says Nebel happily. We are of course really excited about that.