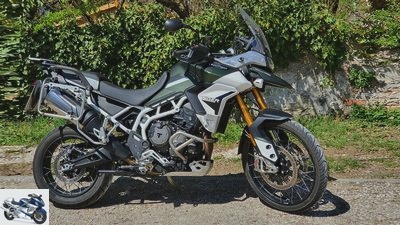 Before the three-cylinder is finally released into everyday editorial work, it has to be measured on the test bench. This is followed by the input measurement as well as the sealing of the motor and a compression measurement. At around 25,000 km, MOTORRAD then publishes an interim endurance test; Final measurements follow after 50,000 kilometers, before the Triumph engine is dismantled and examined. 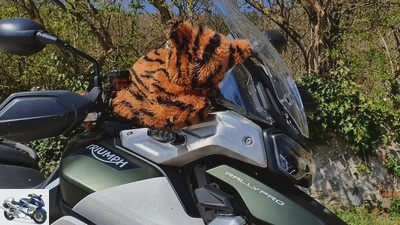 The cat already caused a lot of thrill in the editorial office.

More than annoying, almost dangerous: The triple went out suddenly on the autobahn twice. Rainer Froberg from the MOTORRAD action team had this unpleasant experience once. After a construction site, the engine suddenly stopped when the gas was opened again: “with a loud mechanical thump and clacking noise, suddenly nothing went on in the middle of the left lane.” At least the on-board electrical system was still working, and Rainer could flash his way onto the hard shoulder. After there is no “Incidence of light in the motor housing”, So there was no externally visible engine damage, Rainer switched the ignition off and on again, whereupon the triple started immediately. Editor-in-chief Uwe Seitz also had a similar experience.

But nothing was stored in the error memory. All sensors also work as they should. So we’re looking closely at how it goes from here. And look forward to great tours with the tiger. Because this is where he / she can best exploit the strengths of comfort, equipment and long range.

The first kilometers, the first journey

The travel enduro with its 888 cubic triple features the highest level of equipment. What is on board as standard? A lot, a hell of a lot: heated seats and heated grips, 7-inch TFT display, shift assistant, illuminated switches, electrically adjustable chassis, six different driving modes, engine protection bars, aluminum oil sump protection, main stand, tire pressure monitoring system, additional headlights, cornering ABS and, and and. With this, and with its chic aura (green paint contrasting with the white painted main frame), the Tiger 900 was already able to score on a tour to Sardinia. Claudia Werel and Markus Biebricher were looking for good reports for our travel magazine “Ride”.

What did they find on the Triumph? Comfortable seats and a comfortable chassis: “stable, but not very handy.” In addition “a smooth gearbox and nicely controllable clutch and brakes.” But there are also points of criticism, such as the passive seating position: “The handlebars are too far away for dynamic, front-wheel-oriented cornering.” In addition, the tubular frame is rather wide and spreads the legs quite a bit. And on the clutch bell, the hip plastic protector is in the way of the right lower leg. Most of all, the tiger feels heavier than it actually is. That is a real 234 kilograms, plus eleven kilograms for the two aluminum cases. None of this is excessive. Nevertheless, the Triumph Tiger 900 Rally Pro always seems a bit slow to drive.

Be sure to try other tires

Just for comparison: Our long-term test Yamaha 700 Tenere weighs 221 kilograms with engine protection, main stand, but drives worlds more light-footed than the Tiger 900. To what extent the tires play their part in the sluggish handling, we still have to go with other tire brands. The 900 series is currently still rolling on the standard Bridgestone Battlax A41 road enduro tires. We are curious whether Contis or Metzeler, Michelins or Pirellis will make the Triumph more manageable. After all, the Tiger with the Bridgestones remains absolutely stable on the autobahn, up to a top speed of 195 km / h, slowed down very gently by the ride-by-wire that at top speed simply does not release a full 90 degree opening angle of the throttle valve.

The triple takes off bravely at lower speeds. But “it vibrates noticeably from 5,000 tours, but does not kick or rock” is in the logbook. Nanu? In general, the three-cylinder from Triumph and Yamaha plus those from MV Agusta are considered highly emotional drives. Well, Triumph has designed the grumpy-sounding 900 triplet differently than all triple sisters: The crank pin offset on the Tiger is 90-90-180 degrees instead of the usual three times 120 degrees. That explains coarser vibrations and tougher, not quite as turbine-like, loose turning.

The installation position of the engine is also new compared to the 800 predecessor. He slid forward a little. This enables a new cooler design: Instead of a large one-piece radiator, the Tiger 900 uses two smaller coolers offset to the sides. This “Radiator splitting” à la BMW R 1250 GS is supposed to save weight and reduce heat radiation for the driver. But, with all due respect, the latter doesn’t really work: “The windbreak is great,” MOTORRAD editor-in-chief Uwe Seitz wrote the Triumph Tiger 900 Rally Pro in the driver’s log. “However, almost no hot exhaust air from the engine is discharged, even at higher speeds”. Uwe felt in the subtropical summer “like on a grill.”