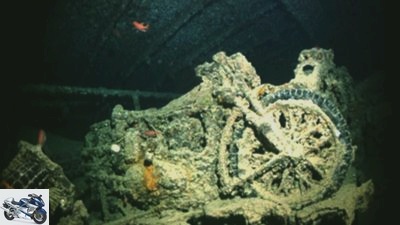 An English freighter has been lying on the seabed on the Sinai since the Second World War, and it had also loaded desert motorcycles. Paul Munzinger went underground for us.

The mood is quite good on board the SS Thistlegorm, because you are almost there. It’s after midnight
from October 5th to 6th, 1941, and
most sailors are already asleep. The English ship has been lying at the entrance to the Gulf of Suez with about 20 others for ten days. One waits for unloading in the port of Tawfiq, whose entrance is blocked by a British tanker. It got him: hit a German mine.
Ten days in this subtropical
Heat ?? Pastimes with games and swimming in the Red Sea, even the most attentive crew becomes a bit careless despite the World War. What reassures Captain Ellis: Here in the Strait of Gubal to the west
des Sinai, the location is considered relatively safe. At Anchorage F has never been like
the berth is named internally by the English, serious problems. To protect against attackers, the cruiser HMS Carlisle is also on the side, on top of that, the side walls are against enemy
Machine-gun salvos reinforced with concrete slabs and rear guns installed.
For the “Blue Thistle”, as the ship is translated, this is only the fourth voyage. Full of explosive war material, it left Glasgow in August and sailed around Africa via Aden into the Red Sea. The 12,000 nautical miles long journey across the Atlantic seemed safer than the eight times shorter route through the Mediterranean. On board: 49 seamen, armored personnel carriers, bombs, torpedoes, ground mines, aircraft parts, fuel tanks, even locomotives and trucks,
whose flatbeds are loaded with over 150 desert-ready motorcycles.
A huge floating armory that was used as part of Operation Crusader for supplies to the 8th Army
to deliver to stop the desert fox Rommel. For this merciless human and material battle, civilian freighters like the Thistlegorm of the Scottish shipping company Albyn-Line have to be used, because the English simply have too few warships.
The Thistlegorm is only waiting for its cargo to be unloaded when the Germans receive a very hot message: The Queen Mary, with Australian troops on board, is on course precisely in this area. Orders for two Heinkel 111 bombers to fly to Sinai on the night of October 5th and the troop transport
to sink. Each machine is equipped with two 2,000 kilo bombs.
But the Germans have somehow made a mistake over time, they cannot track down the Queen Mary at all. Once they have reached their limit of range, the Heinkel have to turn back without having achieved anything. One flies back along mainland Egypt, the other on the west coast of Sinai. This is where the sad story of the Thistlegorm takes its course. Of course, the long convoy of ships is spotted by the bomber, and as the largest freighter of all, the “Blue Thistle” is immediately in its sights. The attack comes as a complete surprise to the sleeping seafarers.
Some are lying in hammocks on the upper deck ?? the day was particularly hot. It is around 1:30 a.m. when the plane thunders low over the ship. One or the other hears a hum, then the two two-ton bombs hit. A huge explosion, chaos on board, death, fire, countless detonations, the dangerous cargo goes up in the air. A terrible inferno by the nine seas-
people die. The others survive like
by a miracle. Eventually the ship collapses like a pocket knife and sinks.
In 1956 Jaques Cousteau appeared as a
First off to the Thistlegorm. The discovery of the wreck was, however, no accident, as Egyptian fishermen knew about a “large ship” from which they also caught large fish. In the film “Silent World”, Cousteau shows a fascinating documentation of the practically “almost intact” wreck, yet it is forgotten again. Not until 1991, when the Red Sea became a dream destination
advanced for Europe’s aquanauts, it is being rediscovered.
Today the Thistlegorm is »the spot«
in the Red Sea. No longer than right that the Egyptian government has placed the ship cemetery under a preservation order. Nevertheless, in the beginning everything was unscrewed, sawed and stolen. For a few years now, however, divers have been paying closer attention to their fingers. And that’s good. Because the “Blue Thistle” has lost absolutely nothing in terms of tension, despite the high traffic.
The rusting giant rests imposingly upright in the sand at a depth of around 28 meters. The thick anchor chain is a reminder that
you actually had to wait back then. Especially in the morning light, the backdrop looks a bit spooky. On the upper deck, two tank cars and dented railroad cars. A loading mast is folded over over the first hold, the main mast in front of the second ?? where the show for motorcycle enthusiasts undoubtedly begins: clean on truck beds
Lined up, the Matchless G3L, Norton 16 H and BSA M 20 defy the rigors of the
Depth. Some are so well preserved that they could be perfectly restored, while others can only be identified by absolute professionals, especially since the 16 H and M 20 are strikingly similar.
Presumably the machines were brand new. All three types were specially built for use in the desert, with a total of almost 300,000 pieces. Obviously, with such quantities there are more selected specimens? but does not guarantee a selected exhibition location.