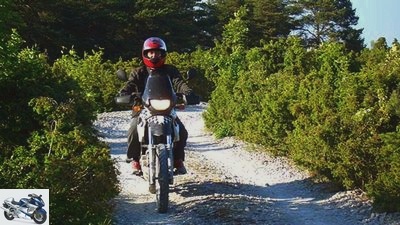 Strange tour: sabbatical year on the bike
Sabbath on the Baltic Sea

After six years in the mobile communications industry, most of which I spent at my desk, in the car and in meeting rooms that were too small, I was mature? quit my job and started my sabbatical year.

Inspired by an earlier trip to Lithuania, Latvia and Estonia, the idea of ​​a tour along the Baltic Sea was born to see the Baltic EU states one more time before they turn too western. A plan that is already threatening to fail in Poland. In the middle of Danzig a policeman is talking to me that he wants my BMW. I beg your pardon? Seizures? Just because I’m parking on the sidewalk? I had been warned that this could cause trouble, but … ?? No ??, the young Pole reassured me in German that he wanted to buy the machine. More precisely his colleague, whose attempts to purchase an F 650 over the Internet always failed because of the question of its origin. There still seems to be some need to build trust in our neighbors. I leave my address behind, curious to see if he’ll get in touch after my trip and glad to be able to continue the same.

Kaliningrad. What had I read on the net about the Russian exclave for horror stories. Harassment from customs officers, endless bureaucracy and missing manhole covers everywhere. I got a foretaste when I applied for my visa. The tourist visa only allows one entry and exit to Russia. Since my tour was supposed to go through St. Petersburg, I was told that this could be arranged with a visa for business travelers. Only cost more with a mere 200 euros. Because of security policy? rather, it seems to be a nice source of income for the state.

A little tense, I now fill out the immigration forms. Drugs, weapons, pornography included? No. But a vehicle, and that has to be cleared. Russian liability insurance is also necessary, although mine is valid as far as the Urals. But nobody cares about that here. ?? Not good ??, says a customs officer with an oversized flat cap, because I mixed up the lines of date and place of birth. I shrug my shoulders helplessly. He smiles, stamps and waves me through. All just people under their big caps. 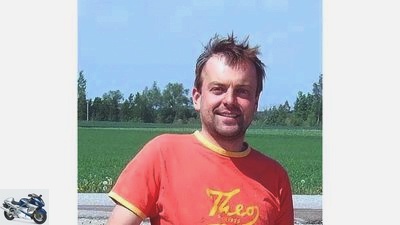 Theo Schmitz, lawyer from Hamburg, started a tour of the Baltic Sea in April 2007 on his BMW F 650 GS Dakar.

The area is simple, but very idyllic, and Kaliningrad itself has everything you would expect from home, from ATMs to full-range supermarkets. Also manhole covers! And everywhere, I don’t want to hear anything more about it! Somehow it’s a different world anyway. Lenin looks down from numerous pedestals at the flourishing capitalism, which is characterized by a tremendous density of Porsche Cayenne and other luxury sledges between rickety trams and old Moskvich cars. The Russians inhaled capitalism with tremendous breaths. Outside of the city there is little of this, as I become aware of on trips to the former Tilsit and Trakehnen. The Trakehner stud surrounded by simple farmhouses ?? until 1944 the pride of East Prussia ?? is still easy to recognize, by the way.

I leave Russian territory via the Curonian Spit, which is not easy considering the Cyrillic signs. Hardly anyone speaks German or English here, but at some point the Lithuanian border will be reached. “Anyone who does not know the Spit is missing a piece in their soul”, Thomas Mann is said to have once said and speaks to me from it. What an enchanting landscape. Years ago I fell in love with the huge dunes between the lagoon and the Baltic Sea. A love that has to be paid dearly in the meantime. The price level corresponds to that on the German Baltic Sea.

As in Poland, signs on many construction sites in Lithuania indicate EU projects. The devil is going on in the campsites at night. Drunkards and illegal car races because the access roads are so nicely freshly tarred. The Lithuanians are basically sporty and supposedly lead the world accident statistics. 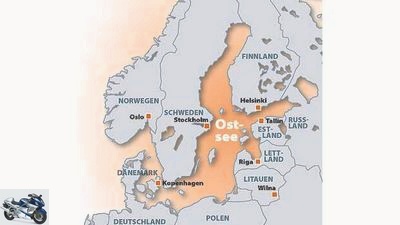 In four months and over 16,000 kilometers, Theo Schmitz experienced nine countries and at least two worlds.

Latvia digs into my memory through the flotsam artist Biruta Kerve with her considerable collection of messages in a bottle. Also due to the second failure of the BMW petrol pump. Estonia’s charms are untouched nature, gravel roads lined with poppies and the excellently preserved old town of Tallinn. I am asked several times why Schroder and Merkel are so friendly with Putin. A trust that is not shared here, especially since Russia has still not officially recognized the Estonian border and recently paralyzed Estonia’s entire IT infrastructure with attacks and viruses. I am advised not to go to St. Petersburg at all, but to ferry straight to Helsinki, but what would I have missed? A metropolis of art and culture with so many bridges and canals that the travel guides of the Venice of the North announce. I let myself drift through the city of five million for days. See museums and market halls bursting with abundance. I encounter the other Russia in the side streets, in the form of armed members of the notorious OMON special unit.

It is well known that plans are there to be changed. Mine changes a lot after Helsinki. After the wide, white sandy beaches of the Baltic States, the Finnish Baltic coast is so soporific that, following the advice of a local motorcycle mechanic, I headed for Lapland and the North Cape. Where other travelers warn me about the boring Swedish coast. So I’m traveling back through spectacular Norway. First thought when I’m back in my apartment: Who do all these clothes belong to? I got by with two pairs of pants and four T-shirts for the last 17 weeks.

Incidentally, the policeman from Gdansk has not called in to this day.