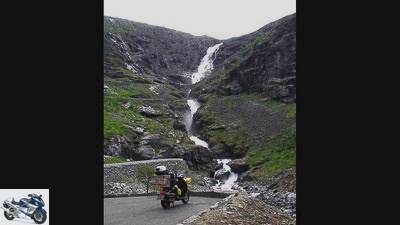 Unusual tour: with the Vespa to the north

Unusual tour: with the Vespa to the north
There can only be one

To rush to the North Cape with enduros or tourers. is nothing special these days, thought. Peter John and hummed north on a Vespa. An adventurous trip with pitfalls.

The Vespa stutters, then it runs normally again. Until suddenly the engine stops without warning. Can not be started anymore. I want to go to the North Cape and have just 50 kilometers in the direction of Braunschweig behind me when I roll out of the road. Call ADAC, have it towed, what else should I do? In the workshop, of course, the demonstration effect: the bee runs perfectly. As soon as I’m in Hamburg, the stubborn part stutters again. I turn the ignition on and off four times. The scooter has been purring ever since. My dealer diagnoses an electronic crack in the immobilizer over the phone. He advises me to continue with the master key. That works great.

I had long dreamed of the North Cape and the vastness of Lapland. I really wanted to go there, back in 1981 with my BMW R 100 RS. It didn’t work at the time, but the seeds were sown and ripened for 26 years. In 2007 I finally started my travel preparations. I wanted to experience every kilometer, camp on the way, travel cheaply. And I like to do things that others don’t. Riding the route on a large motorcycle therefore only briefly occurred to me. Then I got on the scooter trip. Asked friends if they would come with me. Nobody wanted, everyone had excuses.

So I had to go alone. It is not at all easy to store equipment and luggage on a scooter for two months. I have mounted an aluminum box on the luggage rack, and between my legs I transport a canister of fuel. The roll with the camping equipment is lashed to the pillion seat, with a bag with clothes on it. The front rack carries a waterproof box with odds and ends, and the storage space under the seat holds tools, extra gloves and a neck warmer. Just stupid that the Vespa equipped in this way shook like crazy between 40 and 60 km / h. So I poured lead weights and screwed them to the handlebar ends. The shaking was gone and I could finally start.

After the mishaps at the beginning, I enjoy Denmark. Drive via Ribe, Varde, Holstebro, Thisted, Abybro to Blokhus, see Skage and Frederikshavn and take the fast ferry to Kristiansand. We have finally reached Norway. I roll to Bergen via Stavanger. A city that really impresses me. Slovag, Flekke, Førde are the names of the following stages, then comes Alesund. From there I take the ferry through the Hjorundfjord to Leknes. We continue with the Vespa to Hellesylt and by ship into the famous Geirangerfjord, with its vertical landscape.

On the ?? Eagle Road ?? after Valldal it happens. A completely screwed up motorhome driver pushes me away, I rattle four meters down a gravel embankment. It takes me twenty minutes to get the Vespa back on the road. The damage is minor, the motorhome driver has run away. To compensate, I drive over the Trollstigen, Norway’s most famous serpentines. It’s freezing cold and the rain doesn’t spare me. The Vespa carries me endless stages.

Behind Alta comes Norway’s most oppressive tunnel. Fog in the tube, pitch black, water from above and below. At the North Cape, however, bright sunshine. A great feeling to finally be there after 4200 kilometers. From now on it goes south again. At Lakself on the Arctic Ocean, mosquitos almost eat me up. What follows is the vast expanse of Lapland ?? and ice-cold rainy stages in Finland and Sweden. I change the rear tire in Hornefors. At some point I’ll be home and I realize how much the tour has bonded me with the Vespa. There can only be one.

To person:
Peter John was born in 1952 and is responsible for overhauling engines at Lufthansa-Technik in Frankfurt. With his 250cc Vespa, he covered around 40,000 kilometers in two years. The next trip by scooter will be from Alaska to L.A.