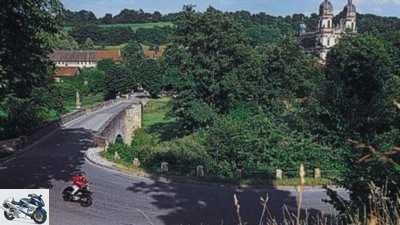 Via NSU Lux to Jagst and Kocher

Via NSU Lux to Jagst and Kocher
The discovery of slowness

When are you ready for an oldie? How does a small river trip turn into a self-discovery trip? And where is Langenburg actually?

Via NSU Lux to Jagst and Kocher
The discovery of slowness

Burgenstrasse, Limesstrasse, Dichterstrasse, Weinstrasse: a lot converges on Jagst and Kocher. Last but not least, a dense network of ingenious motorcycle routes.

THE ROUTE With a little more than 8.6 HP under your bum, the route on the left turns into a leisurely weekend tour. Unless you get lost on the sometimes unbelievably steep off-roads that lure you through the undergrowth, along extremely idyllic streams or up into the vineyards and plateaus everywhere in the Heilbronn / Hohenlohe area. A few of them are of course already incorporated into the route. Here is a mini road book of the relevant places, course west-east, Jagst: Billigheim, Waldmuhlbach, Reichertshausen, Mockmuhl, Sennfeld, Leibenstadt, Korb, Dippach, Ruchsen. Schontal Monastery, Neuhof, Schleierhof, Sindeldorf, Krautheim, Assamstadt, Laibach, Rengershausen, Dorzbach. Langeburg, Hurdles, Leofels, Dorrmenz, Diembot, Eichenau, Kirchberg. Course east-west, Kocher: Ohrnberg, Unterohrn, Schwollbronn, Langenbeutingen, Cleversulzbach, Eberstadt, Buchhorn, Gellmersbach, Weinsberg. History freaks are guaranteed to get their money’s worth at Jagst und Kocher. One of the highlights is the renaissance castle Langenburg with a docked car museum. Completely different in nature: the 500-year-old pilgrimage chapel St. Wendel zum Stein built into a shell limestone wall and the caves around it. Jagsthausen advertises the Gotzenburg, birth towns of Gotz von Berlichingen, who is resurrected every summer at the Castle Festival in Goethe’s play of the same name. The knight with the iron hand was buried in the Schontal monastery, a former Cistercian abbey with a magnificent baroque church. In Neckarsulm, the German Two-Wheeler and NSU Museum invites you to travel back in time from 1817 to the present day. ACCOMMODATION There are plenty of pensions, hotels and holiday apartments even in the farthest corners. A particularly beautiful location: the Gasthof zur Post at the Schontal Monastery, phone 07943/2226, double room 110 marks and the Jagstmuhle in Heimhausen near Mulfingen, phone 07938/90300, double room 138 marks. Campsites are rare and mostly contaminated with garden gnomes. Our tip: Braunsbach am Kocher. Here you can camp close to nature right by the river.MARTS / ADDRESSESMairs general map sheet 16 describes almost all worthwhile roads in the region on a scale of 1: 200000. If you want to know more, you can use the cycling map, sheet 57 “Tauber-Hohenlohe” in 1: 100000 from the Baden-Wurttemberg state survey office. Further information: Touristikgemeinschaft Hohenlohe, phone 07940/18206, Internet www.hohenlohe-tourismus.de.