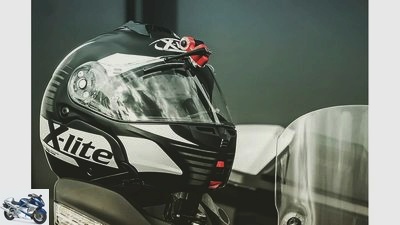 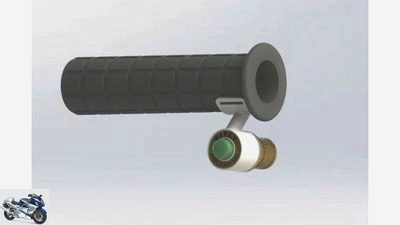 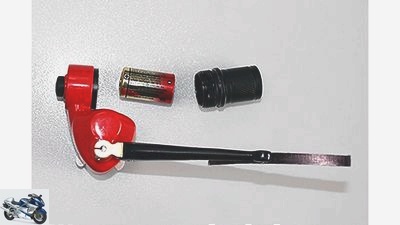 1/6
A Slovenian startup has developed a windshield wiper for motorcycle helmets.

2/6
The windshield wiper comes as a small module and is simply attached to the visor.

4/6
It is operated with a conventional battery.

5/6
A handlebar remote control is also available as an option.

Wipey motorcycle helmet windshield wipers: safer on the road in the rain

Slovenian inventors have developed a clip-on wiper for motorcycle helmets. Now money is to be collected for series production via crowdfunding.

Who does not know them, the rides in the rain with increasingly poor visibility. Wiping off the drops on the visor with the glove is only possible to a limited extent. The drops run off by themselves only at a higher speed and only insufficiently. The solution for a drip-free view could now come from Slovenia.

Universally suitable and only 55 grams in weight

The startup Wipey has developed a small module that weighs only 55 grams and contains a windscreen wiper and motor that can be simply attached to the top of the visor edge on almost any helmet. The assembly time is given as just under a second. A strong spring in the clamping system is supposed to fix the windshield wiper securely to the visor even at high speeds (it was tested up to 130 km / h). The windshield wiper should be barely noticeable in the driver’s field of vision. The windshield wiper is started by simply pressing the flank of the housing in front of the forehead. A total of three different wiping intervals can be set. There is also an optional Bluetooth remote control button that can be mounted on the handlebar.

The small windscreen wiper motor draws its energy from a conventional battery, which is supposed to guarantee an operating time of 3 to 12 hours.

The developers are not yet able to name a price for the Wipey wiper. It is clear, however, that from May over one Kickstarter campaign Money is to be collected for series production.

What do you think of a helmet wiper?

Simply brilliant, I want it.