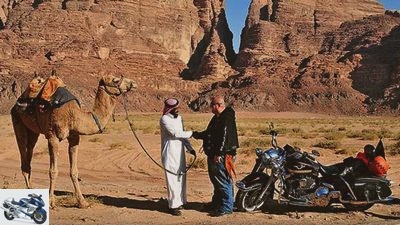 With Harleys in Syria, Jordan and Lebanon

Shortly before the Arab Spring began, German Harley riders drove to the Lands of the Arabian Nights to tour with locals. They experienced great hospitality and are now hoping for a speedy liberation of Syria.

It all started at a biker party. A few Harley fans talked about the fact that a Harley dealer had just opened in Amman, the capital of Jordan. “You’d have to go there,” one of them threw around. With Harleys in the desert?

Sam Stirl (42) from Dresden enthusiastically took up the idea, turned it into a project and started in November 2010 with a MAN semitrailer truck full of US iron to the Middle East. From Venice, the truck crossed over to Tartus in Syria with the Italian ferry company Visemar Line. There the Syrian Riders, a national motorcycle club, helped the Germans with a paper war that bordered on madness. No one had ever entered Syria with a truck full of heavy motorcycles. In addition, motorcycling was forbidden in Syria, so the inventive, courageous Syrian Riders officially do not even exist.

“Without these guys we wouldn’t have made it,” Sam Stirl is sure. The journey from Tartus to Damascus took place in a convoy of 400 trucks because the Syrians wanted to prevent smuggling and customs offenses. After unloading the bikes in Damascus, the surprise: a police escort led the pack of fat Harleys through the chaotic traffic. A motorcycle squad that otherwise heads state guests and is one of the many contradictions that prevail across the country. With Arab ingenuity, a lot is apparently possible despite the inhuman hand of President Assad. The Syrian Riders all ride big, illegal Harleys and fought for their official recognition, just as the whole country is now fighting for better living conditions and for an end to the power-obsessed, conservative regime. With over 30 motorcycles, the German and Syrian bikers in Damascus set a beacon for (motorcyclist) freedom.

Damascus turned out to be a pulsating, fascinating metropolis bursting with creativity, with people who simply want individual opportunities for development instead of daily state reprisals. Then we went to Aqaba, where the first Jordanian Harley rally was to take place.

The formalities at the Syrian-Jordanian border were complicated, but everyone remained friendly. Then the entourage thundered to Amman, the Jordanian capital. The local HOG chapter under the direction of Prince Abbas Bin Ali, a great cousin of King Abdullah II, was waiting in the Harley-Davidson branch. He proudly said that motorcycling has only been officially allowed in Jordan for a year. Before that, motorcycles were illegal for 28 years. Only the royal family was entitled to the privilege, which Abdullah made ample use of. When the ban was lifted and the Harley Chapter was established, King Abdullah appointed his two-wheeled cousin Prince Abbas as director. 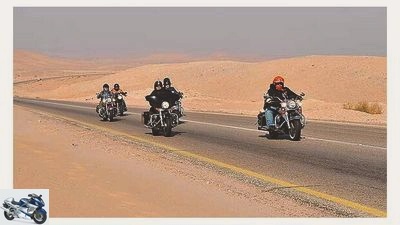 Desert heat between Amman and Aqaba.

The Harleys drove along the Dead Sea with police escort. Here you were up to 410 meters below sea level and found yourself at the deepest point on earth. As far as the Red Sea, the route ran through a sandy desert near the Israeli border, with mountain ranges on the horizon. The participants of the “First Jordan Harley-Davidson Rally” were waiting in Aqaba. Bikers from Bahrain, Egypt, Lebanon, Qatar, Saudi Arabia and Jordan celebrated and rode together in harmony.

Various tours led to the ancient rock city of Petra and to Wadi Rum, where Lawrence of Arabia wrote history. Columns of dromedaries transported the bikers into the worlds of a thousand and one nights. Then the Harleys crashed to the Lebanese border in a forceful kick. Difficult border formalities again, this time the Lebanon Riders helped. Hassan, the boss, led the German friends to Beirut, where there is a merciless fight on the streets and no one wants to be second in traffic. After further tours with the Lebanese Harley Chapter over daring slopes, the Orient adventure for the Germans ended in Damascus. They want to go back, but now they have to wait until Syria has freed itself. Hopefully that will work out. Not just in the interests of motorcyclists. 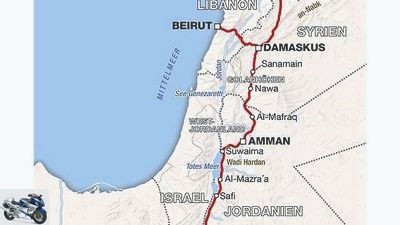 Syria, Jordan and Lebanon are countries in the Stone Age of motorcycling, but exotic attractions beckon. Not a goal at the moment, but suitable for dreaming and hoping.

General:
Syria is currently looking for a new identity. If the political situation has hopefully stabilized with a new form of government, the country, which as the “cradle of mankind” has magnificent sights, is an attractive travel destination. The capital, fairytale Damascus, is one of the oldest cities in the world. Around 20 million people live in Syria on 185 180 km². In Lebanon, on the other hand, with its capital Beirut, around four million people share an area of ​​10,452 km². Trips to Jordan or Lebanon depend on the political development in Syria, safety information is available at www.auswaertiges-amt.de. Further information: www.syriatou-rism.org, www.visitjordan.com. Tourism can help rebuild. Guided tours are offered by: Sam Stirl, East Ride Tours Dresden, www.east-ride.com. Rental machines through Harley dealers in Amman (Al Salam Street) and Beirut (Michel Chiha Street). There is a certain tourist infrastructure in Jordan and Syria, Lebanon lags a little behind.

Getting there:
You should avoid Israel if you want to enter Arab countries. There are cheap flights to Damascus from Prague (Czech Airlines), Frankfurt am Main or Hamburg (Lufthansa). You can get to Beirut from Berlin and Dusseldorf. Ferry: Venice -Tartus / Syria: www.visemarline.com