The FJR 1300 underwent profound changes in 2013. This “phase 3” displays a generous dynamism and frankly pleasant to detail. Her gaze like a fat cat gives way to that of a smirking cat; its flanks have created a new identity while providing additional protection; his turn signal warts disappear in favor of rows of leds.

Yamaha elegantly succeeded in this restyling. While retaining this identity of a vessel, both powerful and imposing.
An ounce of mechanical retouching must accompany this silhouette. The already generous 4-cylinder FJR has received some mechanical upgrades and a large electronic series. The engine block now features jacketed cylinders coated with a ceramic plating. The new system consists of applying the treatment directly to the alloy of the block. Main benefit: better heat dissipation.
Redesigned injection bodies, an improved exhaust system with half the catalyst needed, a ride-by-wire YCC-T (Yamaha Chip Controlled Throttle) type throttle – these few components contribute to more gradual acceleration. As a bonus, a ladle of additional power (2 horses and half a mkg).

The FJR AS differs from the standard version by two major characteristics. Its suspensions (next chapter) and its robotic transmission. It is similar to the sequential boxes of sports cars. Two possibilities for controlling the reports: traditionally with the foot selector or via two commands on the comodo … except that the clutch lever has disappeared. It’s a combination of sensors and an electronic control unit that takes care of everything. Once the order has been received to change the gear, the assembly takes care of the engine management, the engagement of the dogs, the ignition, all with comfort and flexibility. this system weighs down the mechanical part by about 4 kg. The driver retains all the management of his driving, because the YCC-S is not a completely but semi-automatic mode: it is you who give the impetus to change gears and the gearbox does the rest of the job ( disengage, internal fork and pinion movements, throttle management, engage).

The AS model goes further, much further in damping solutions than the standard FJR. An inverted model takes place to accommodate the elements allowing the GT with 3 tuning forks to recover to the level of requirement of the category.
As on the R1, the damping systems are separate: the compression mechanism is in the left sheath, the rebound in the right. But that is not the most important. The major innovation brought to this FJR is the electronically controlled damping. After BMW and its ESA then Ducati and its Riding Mode, Yamaha has adopted this type of technology..
Four modes are available: pilot only, pilot with luggage, pilot and passenger, pilot and passenger with luggage. To complete, it is possible to select 3 damping forces: Soft, Medium or Hard. This gives us a total of twelve available configurations. Choose a profile, the bike then adjusts its suspensions to your liking.
Even if it means tampering with the processor, you might as well look at the electronic-automatic clutch, the YCC-S. The contribution of ride-by-wire makes it possible to refine the flexibility and speed of the system. Other modifications: you can now shift gears by foot or on the handlebars without having to make a pre-selection, and a STOP MODE function appears. By reacting to certain parameters and after having driven a certain time at low speed, the gearbox automatically returns to 1st. A pleasure solution for city driving, where you stop and go again and again.

Let’s go back to the essence of the FJR, and these little attentions that it knows how to bring. The electric bubble adopts a shape to limit air swirls, its support is simplified, and its speed of adjustment increased (2 times faster). Various elements are updated: the stand, the commodos, the taillights, the upholstery of the saddle sides, the passenger footrests, and above all a completely redesigned dashboard. An analog tachometer on the left, two digital screens on the right. Enough to elegantly bring together a wealth of information.
The side cases are still standard, being able to hold 30 liters each and 10 kilos max. To complete the capacities, go through the options box: Akrapovic exhaust, 50-liter top-box, high screen, foot guards, hand guards, etc…. 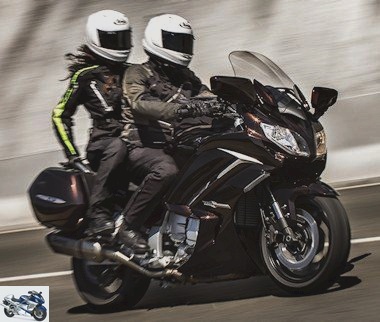 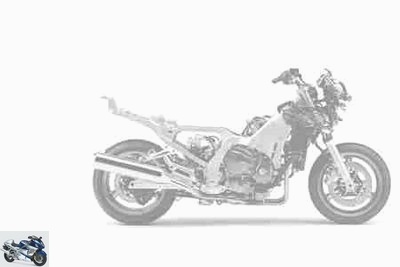 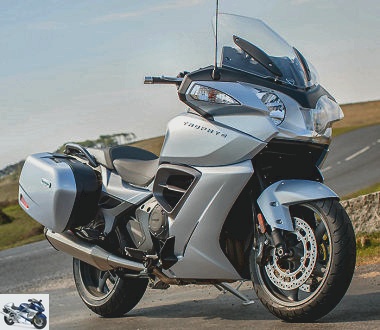 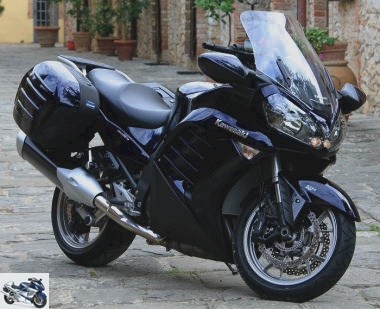 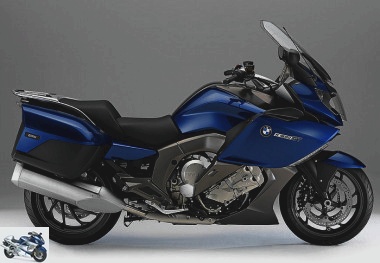 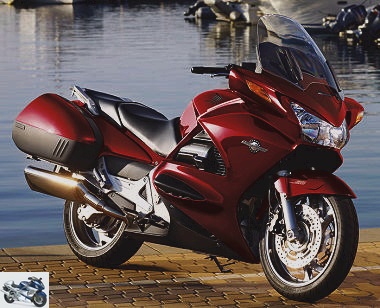 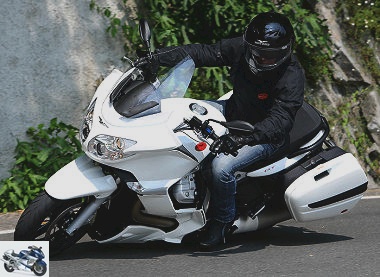 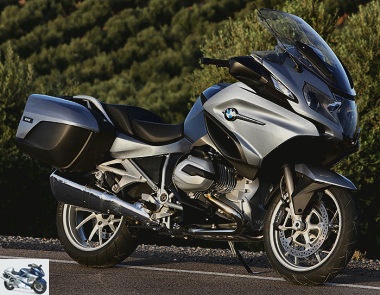 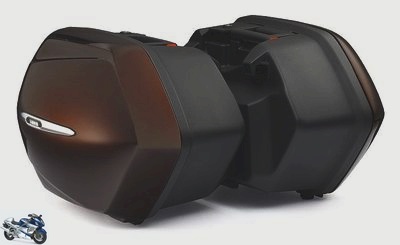 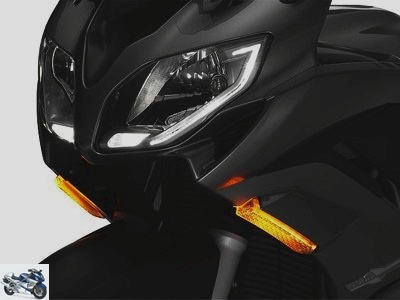 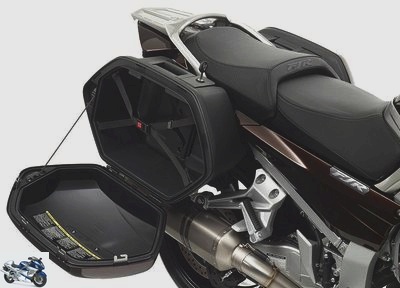 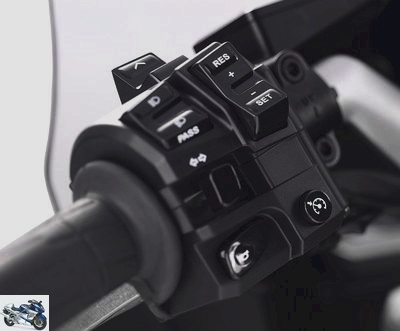 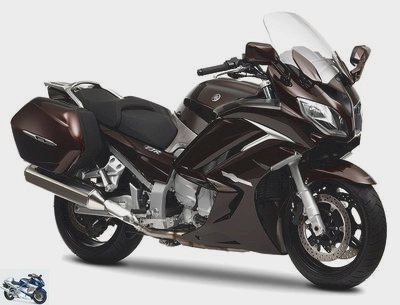 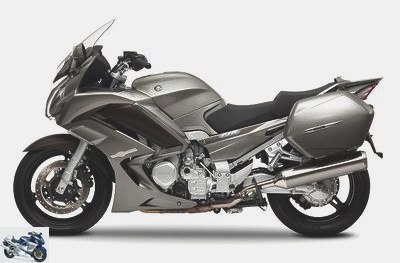 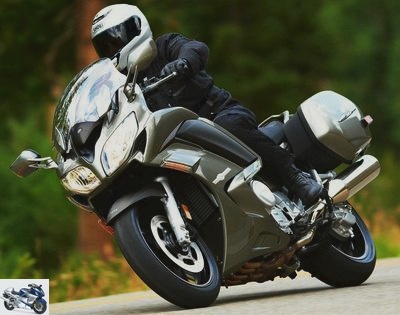 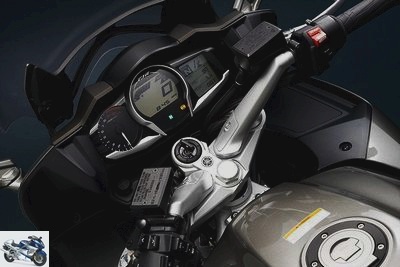 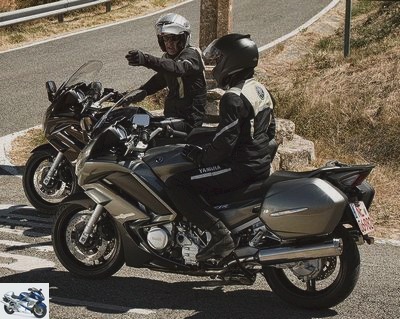 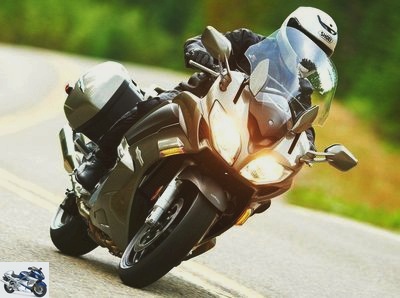 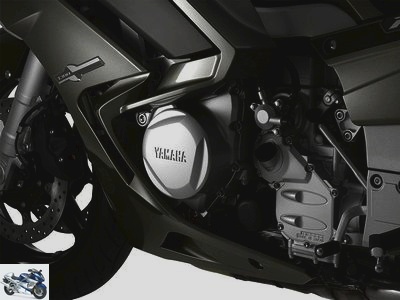 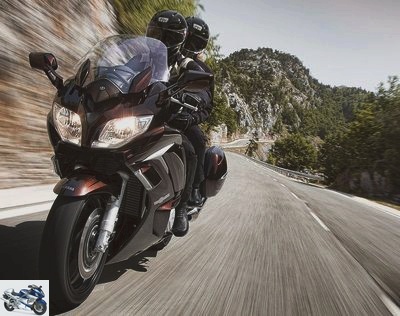 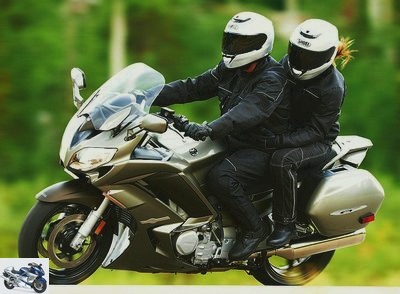 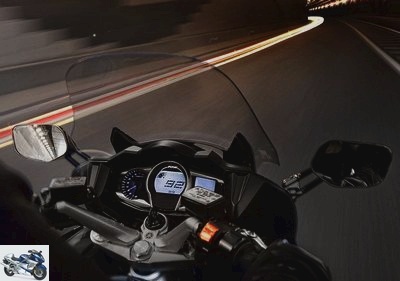 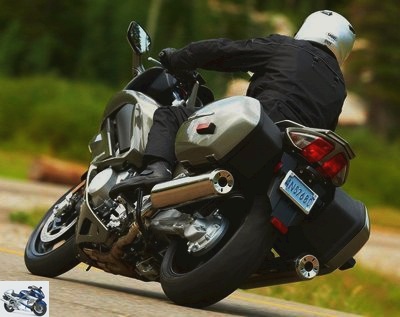 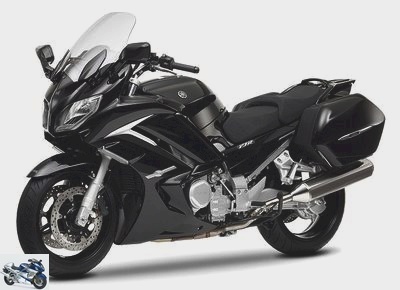 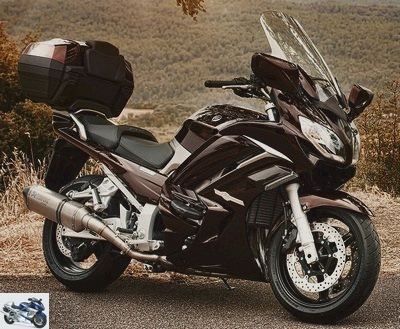 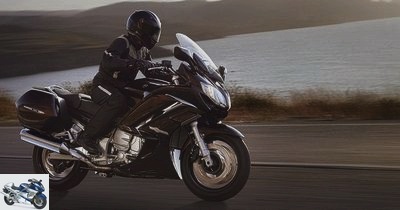 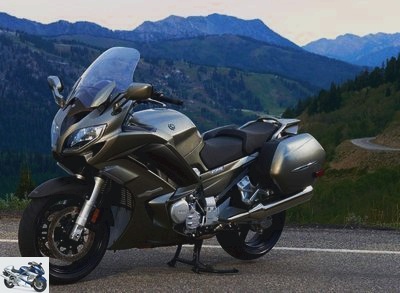 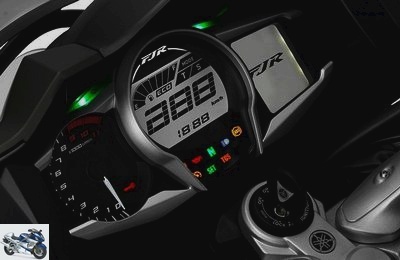 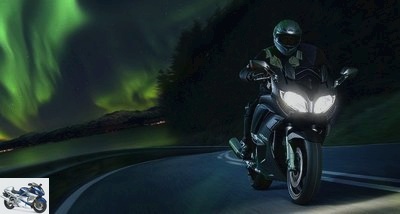