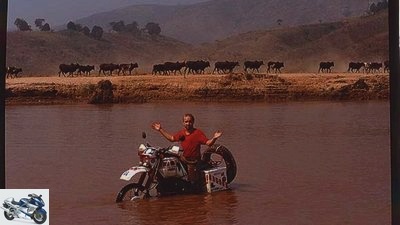 At the end of the 1980s, MOTORRAD editor Rolf Henniges crossed the black continent on one of the first Yamaha Tenere. Twenty years later he tried out how the new one would do under similar circumstances.

The right card is already in there. Unfolded between Malawi and Tanzania, it crouches in the transparent compartment of the tank bag. The rest is also correct: Special equipment supplier Touratech has equipped the motorcycle with everything you need to cross the black continent without problems: additional headlights, GPS, sturdy pannier racks, luggage rack, hand protectors, tool box in front of the engine and more than a dozen protective covers made of aluminum. In case you fall over. In the deep mud grooves of Zaïres, the dunes of the Sahara or the deep-hole carpet of East African tar bands. Yes, Touratech has thought of everything.

Just like me, back then: on a very cold morning in February 1989, my parents stood in front of the front door, moved to tears. The engine of my 600 Tenere is already warming up. It seems completely overloaded: gigantic camping equipment, two spare tires, engine gasket set, second ignition box, chain set, two air filter elements, various Bowden cables, dozens of hoses, pants, T-shirts, sandals – the list seems endless and increases the weight: Ready to travel around the world packed, the 29 liter tank full to the brim, my 84 Tenere weighs exactly 193 kilograms. In addition, depending on the route, a maximum of 18 kilograms can be stored in the form of drinking water. I’ve been to the Sahara twice. This time it should go to the west coast of Africa. Three months are planned for the trip. The employer gave me three months off. If someone had prophesied to my parents that it would turn into 19, they would never have let me drive.

There are no tears today. Not a big goodbye. And especially not three months off. Two days should be enough, says the boss. 48 hours to find out about the newcomer: is she ready for Africa? For this I have peeked out a suitable route. Equipped with 234 kilograms ready for expedition (without luggage), the Single is not exactly one of the lightweights. With a seat height of 90 centimeters, however, it is without a doubt among the guard of high seats. Once it has been climbed and on the move, that is no longer tragic. But at the latest at the traffic lights, those with short legs have to make a decision. Or on the descent. Sitting on it and casually kicking out the side stand, as is common with some cruisers, is not: You just need long legs for this. A trusting rumble escapes from the two rear silencers, which are mounted high on the rear. Trustworthy because it doesn’t sound aggressive or hectic. Not just for sport and speed, but above all for eating kilometers. Just like back then. As always when the mystical word Tenere was used in connection with enduros over the years.

The first was the big hit in 1983. Mighty suspension travel, 29-liter tank, groovy look – from the sales counter ready to face the pitfalls of the Sahara. Whether on rallies or trips. There was nothing like it. The model years 1983/84 (34L) to 1985 (55W) are still legends today. But the myth died from heat. And not in Africa, but in Europe of all places: The 86 1VJ models died in rows because the cooling was made worse during the model update. With that the grave was dug for the legend. Neither the double headlight model 1988–1990 nor the single-cylinder Teneres with five-valve technology in the years 1991–1997 were able to restore their reputation. Today, of all days, at a time when many travelers are celebrating the BMW F 800 GS as the heir to the throne of the 34L by the campfires Yamaha 2008 the successor to the travel steam hammer… 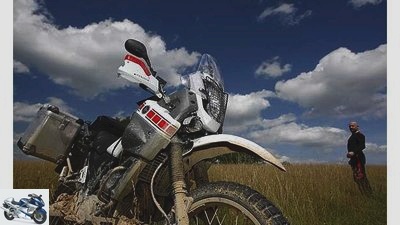 In the vastness of the African steppe you literally go under.

Cameroon in August 1989. My boss gave me notice over the phone because I preferred the endless expanse with an open-end trip to a regular life and am standing with three other motorcycle travelers in front of an 80-meter-wide ford. Open your eyes and through. Halfway through, the Tenere stops: water has gotten into the connector between the alternator and CDI unit. We balance the machine out. A couple of cowherds lurk on the bank. Judging by their gestures, they bet I could get through.

A dejà vu experience. Heavy rain fell last night. A small reservoir has formed in a gravel and sand dump, the embankments of which are otherwise strongly reminiscent of the Sahara. The XTZ and I stand in front of a brown, 50 meter wide carpet of water. A couple of digger and bulldozer drivers clustered on the other bank. My plan is obvious. You bet. Six believe that I am drowning, only one believes in me. In the corridor. Legs firmly on the tank. Just don’t stop. Touratech has installed a sturdy aluminum handlebar, which is also higher than the original thanks to the riser. The machine can be directed wonderfully. Steering commands are implemented almost digitally. I can react quickly to big chunks on the pool floor. The airbox sucks in between the sides of the tank: if I drive fast enough, the broth will split and won’t get into the air filter. It works out. The Continental TKC 80 shovels me out of the mush on the opposite bank. To the amusement of the guests, I take the same route back.

Zaïre, December 1989. Days of rain have softened the slopes, trucks dig their way forward inch by inch, forming waist-deep grooves. Kilometer long. Basically muddy or filled with water. It has little to do with driving here. It is better to feel ahead. My Tenere behaves brilliantly under these circumstances, just digging on at low speeds. The fact that my self-made case system is no wider than 84 centimeters is also advantageous in these situations.

Back to the gravel pit. Here the grooved piste is only 150 meters long, but it goes steeply uphill. The case system is now 90 centimeters wide, but the boxes are larger and, like those from the Yamaha accessories, are mounted high so that they are lane-friendly. Any 690 KTM would have problems here, despite their mighty 65 horses, because their drive only hacks at the chain below 4000 rpm. The 660 Tenere single, on the other hand, behaves like a tractor at lower speeds, chugs off happily from idle and does not lose breath at the top. Super soft on the gas, it delivers its power homogeneously. Compared to the XT sister models R and X, the test bench will later certify that it has more punch below and a broader performance range above 6000 rpm. What is it? Maybe on the larger airbox, the other exhaust system or the larger radiator. Sucks! This power output is ideal for traveling. 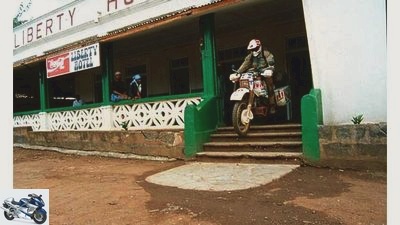 Formerly a bed, bike and breakfast in Tanzania where Tenere stayed in the room at night for fear of thieves.

Tanzania, April 1990. The French man in the Kenyan bar was right: there are tarred streets here. Unfortunately, their surface is similar to that of a Swiss cheese. Every road user – thank God there are not too many – tries to drive around the holes. It looks like oncoming vehicles are rushing through an invisible top test course. These tracks are the mother of all shock and brake test tracks. I was prepared for this, had stronger springs from Whitepower built into the fork and shock absorber. As for the brakes though – well, they were okay.
No comparison to modern times. In the XTZ, double-piston floating calipers grip two 298 discs at the front. They delay perfectly in all situations and are easy to dose. The rear disc brake, on the other hand, could be less snappy. The chassis tends to be too soft for sporty use, but is ideal for traveling. Especially if the tour is really supposed to lead through Africa. 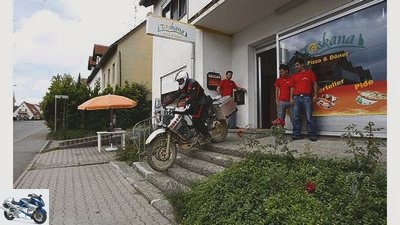 Today the trip to the kebab shop

Back on the asphalt. Completely sapped, I turn onto the autobahn. Only here, in the hustle and bustle of everyday life, is the Tenere not in its element. The nominal 48 HP are tough, struggle with the weight of the machine. 120 km / h correspond to 4800 revolutions, 150 km / h the Yamaha runs at 6000 rpm. The wind protection is surprisingly good, as is the straight-line stability even with thick suitcases and large tires. And 150 km / h shakes the new easily out of the sleeve, just under 170 km / h are maximum in there. Sufficient, I think. But completely unnecessary. Because, far away from German motorways, speed no longer plays a role.

After exactly 19 months and four days, I was safe and broke with the 600 at the Cape of Good Hope in Cape Town. And this time, after two days safe, but rich in experience, back in the underground car park. Yesterday’s Tenere has one thing in common with today’s: the conveyance of nonchalance. In addition, even on the short way to work, it gives me the exhilaration that I can continue to Africa at any time: the seat could be more comfortable, but the fuel consumption of 4.5 liters per 100 kilometers enables a range of 510 kilometers, the standard side fall protectors save from the worst damage, seating position, cockpit appearance and engine feeling literally challenge the crossing of the continent. Unfortunately, only a few put this into practice. Seldom has a classy adventure bike been available ex works at such a low price. And rarely has it worked so well. If you prefer to invest your money in good memories instead of lots of horsepower, you should buy the XTZ. And just drive off.

Technical data of the new Tenere