Barely out and already cult! However, it is as heavy as an anvil, imposes trajectories worthy of a gondola and its autonomy does not even make it possible to reach the next stage. But she has an engine. And a physique to die for until the tenth generation… 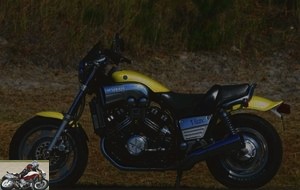 Initially, the 1200 V-Max was only designed for the North American market and Yamaha barely deigns to pin it down in its Japanese catalog. Anyway, in the Empire of the Rising Sun, the driving license of more than 400 cm3 is reserved for an elite and the insurance costs of a machine like this are considerable. The Hamamatsu firm therefore considers that it is only in the United States that the V-Max is capable of sculling from one track to another.. 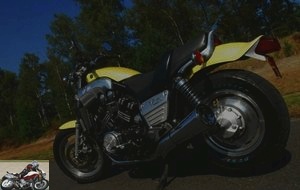 However, Jean-Claude Olivier, then French importer of the brand, will be able to convince the parent company to give him a dozen machines to see if it takes in France. An urban legend claims that Coluche would have discovered it during a trip to the States in 1985 and that he would have imported one by himself…. Gerard Depardieu also acquired one of these flashy machines, but at the time he was known more for his activism in the 7th art than as a patented motorcycle crusher. Anyway, the French V-Max will be, it’s decided ! 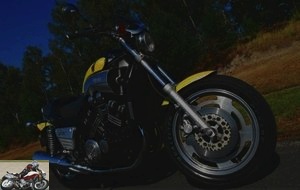 The mill, we only see him, is not new, it is the V4 that equips the GT Venture. But the engineers add these scoops to it which, visually, immediately translate a great need for forced air, so much the engine is stuffed with well octane fuel to deliver all its power. Even when stationary, we can see the dynamics of this engine. Around, elegant surprises, such as the dials on the fuel tank, the chrome blunderbusses and the almost full rear rim …. 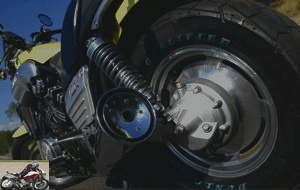 Well positioned on the softness of the saddle, you immediately feel at home on the V-Max. Watch out for the accelerator, don’t tickle it too much otherwise the big Yam takes herself for a catapult ! 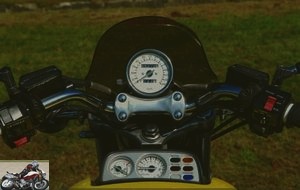 The low saddle height reassures during urban outings. However, the weight of the machine quickly turns the practicality of two-wheelers in the city into a chore in traffic jams. On the other hand, from one bistro terrace to another, the beauty never ceases to be admired by dumb customers …. 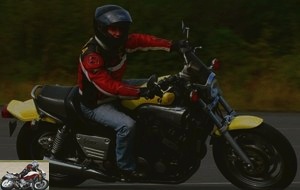 The engine is torquey and nice and accelerates frankly over a wide range of revs. In turns, the lack of agility is clearly felt, despite its killer face, the V-Max behaves much better on a ride than on the offensive …. 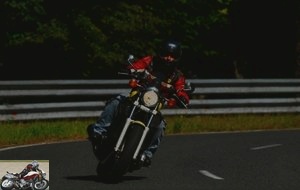 Once the "tank capacity / consumption" parameters have been integrated, you can reach the motorway, keeping in mind that the machine is happily tacking the past 150 km / h. In addition, the position and the lack of protection transform the paid sections into areas of bitumen that are not very pleasant to use …. 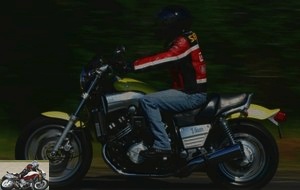 The transported is spoiled! Grab bar, soft saddle, well-placed footrest and no vibrations. It takes that to support the lightning accelerations if the pilot is facetious ! 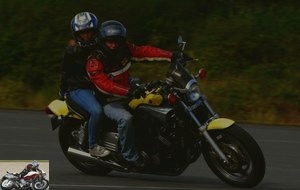 The sheer weight of the machine does not make it an exceptional braking machine, despite the three ventilated discs and dual piston calipers at the front. 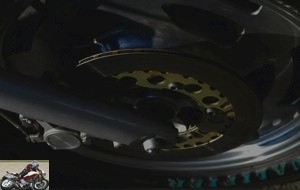 8l / 100 in mixed use. With a 15 liter container. Gas opened wide, the beauty largely swallowed up its 10 liters. In other words, one day or another the jerrycan session will be inevitable …. 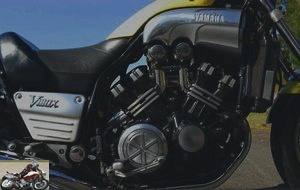 The gimbals of the first models had the annoying tendency to break easily and the starter was also questionable. But Yamaha quickly corrected the situation. The engine is reliable and only needs to be changed every 5,000 kilometers. Given its weight, Lady V-Max is naturally a big devourer of brake pads …. 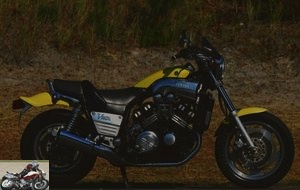 Yamaha presented for the first time the 1200 V-Max, intended exclusively for the USA, in October 1984 in Las Vegas. Thanks to the help of the French importer, Jean-Claude Olivier, it was not until 1986 to see it tumble into France. In France, 12,779 copies were sold during the seventeen years of marketing; 3,064 sales for the first version, 6,804 sales for the Limited version and 2,911 sales for the Black and Carbon versions. An unexpected success despite a deflated engine conforming to French standards. In 1989, the V-Max was priced at 63,451 F (around 14,000 € constant). 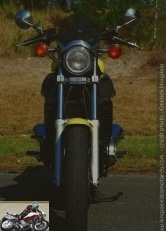 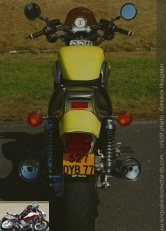 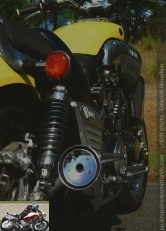 Those who want to afford this hellish-mouthed roadster will find a wide range of prices. Many are the V-Max modified in a tuning way or personalized with a certain taste for ugliness. Nothing beats a well-maintained, original machine to a motley turd. 3 to 4,000 € will be necessary for a first model before 1993 of origin in good condition and 4 to 5,000 € for a version after 1993 with 4 pistons in the calipers and a 43 fork. The last models with few kilometers and in superb condition are trading around € 6,000. 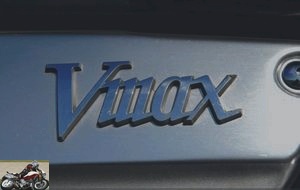 This style of motorcycle is not intended to eat the kilometer, it is above all dedicated to fun and small trips between cafe terraces. Few of the V-Max have a six-digit counter. Its large engine, known to be reliable, nevertheless has a few points to watch out for (minimal, of course), such as the membranes of the carburetors and the starter launcher. The original starting amperage (16 A) seems a little tight to drive the starter, moreover a 20 A battery kit is available to overcome this problem.

Side cycle part, the wheel bearings and steering column tend to take play over time, as well as the universal joint. Take care to check the wear of the transmission by turning the rear wheel in both directions of rotation, when stationary, gear engaged. The game should not be excessive. 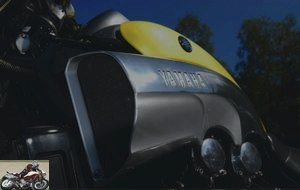 Many “engine kits” marketed (mainly in Italy) and intended to improve performance weaken the mechanical components. Run away from salespeople touting a full version motorcycle. Only American V-Max with V-Boost reach 145 horsepower, but alas, these models are not homologated in France.

We would only like to talk about the fantastic design of this motorcycle, particularly successful in the outrageous, arousing the desire to ride it. This magnificent motorcycle still attracts as much and its owners willingly pass its handful of faults to think only of the pleasure of savoring its qualities. A motorbike-pleasure or motorbike-passion, rewarding and mischievous. Riding V-Max means superimposing pretty colors on the gray of the asphalt …. 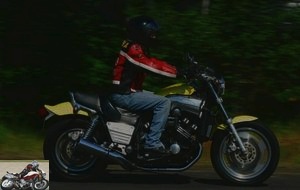 The technical sheet of the Yamaha V-Max 1200